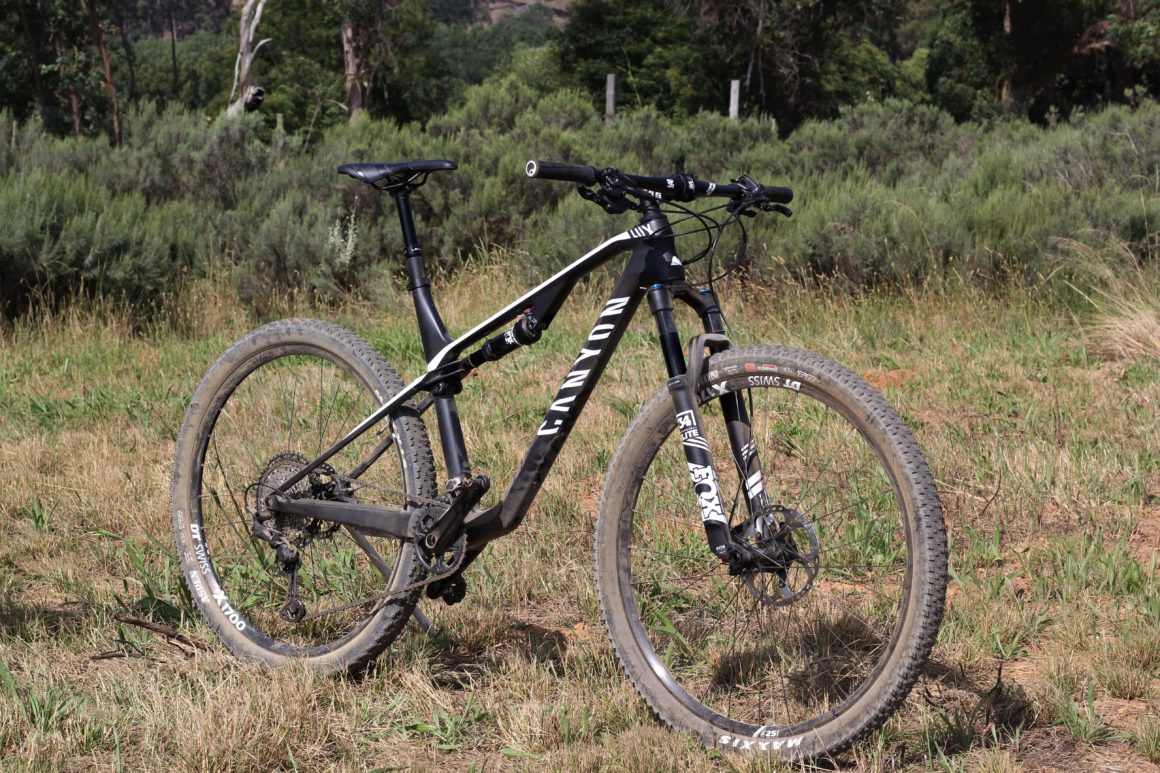 We can’t imagine what the XC race scene would look like without the Canyon Lux. It’s a bike that, since its inception, has escalated to new heights and has been the driving force behind innovation on XC race bikes. The 2020 model is no exception to Canyon’s diligent and out-of-the box thinking engineering.

Furthermore, the bike has been put on trial in the absolute scorching heat of the UCI XC World Cups. Proven guilty of speed and agility by the likes of European World Champ – Mathieu van der Poel, and 2019 World XC Champion – Pauline Ferrand Prevot. While the Canyon Lux 7.0 SL isn’t what those pro’s ride, it still carries that same energy from the head honcho, top-end race bikes.

We’ve always been mad about Canyon’s carbon fiber, and the way they mold it to create stable and performance orientated bicycle frames. While the frame construction is lightweight by design, Canyon haven’t tried to push to be the lightest in carbon material – they’d rather have the frame strong and thoroughly constructed, instead of cutting corners in the design process.

The Lux 7.0 SL comes packed with all the performance benefits of a carbon frame. Its sturdy shape is one that promotes flat out racing, with its high stiffness ratio. Then there’s the headset stopper that prevents the handlebars from knocking against the frame, a flat brake mount on the rear triangle, and smart quick release system on the back wheel. The brand has also included a second bottle cage mount in the main area of the frame – great addition if you plan on covering longer distances.

On the front suspension Canyon have gone the route of adding a 110mm travel fork, instead of a 100mm. The aim with this is still at XCO racing, and but with the added edge of 10mm of plush travel. Making it great for marathons. Weight wise the FOX 34 Performance Step Cast is slightly heavier than the 32 series, which would be the full-race option. However, we feel running a 34 series with 110mm of travel – as presented on the Lux 7.0 SL – is a good standard for pleasing both riders that focus on XCO’s and XC Marathons.

Want to learn how to tune your suspension?

The drivetrain on the Lux 7.0 is none other than Shimano’s new and exciting Deore XT with a 1×12 gear setup. Its a brilliant addition to the bike, with comfortable shift paddles, and almost instant gear shifting. Comparing it directly to a SRAM GX Eagle set, it seems a bit more clunky however we haven’t yet done a weight comparison. You do however seem to get better quality out of the Shimano drivetrain in the long haul, and the same can be said about the brand’s brake-set.

Wheels for the hills:

Canyon have put a vast amount of thought into innovations that will enable you to perform better. One of these innovations comes in the form the Quixle on the rear wheel. The lever slides into the axle for a neat and clean look, but when you pull it out it creates a quick vantage point to easily undo your wheel.

Speaking of wheels, covering the base of where machine and dirt mix, are a set of DT Swiss X 1700. On the Lux 7.0 you have the alloy version of the rims with a 25mm inner width. While if you go for one model up, you get lighter carbon rims in the form of the Reynolds TR 249. It’s a note worthy upgrade for lean and mean racing snakes.

While other brands are designing their XC bikes with a slacker head tube angle due to the longer 110mm forks, Canyon have stuck to their guns, and kept the geometry the same. So, you still get a fast-feel race type of DNA.

Boy oh boy! A ride with the Canyon Lux is on the same level as racing a Bugatti Chiron around the Nürburgring!

On the climbs the bike is super stiff, and you can really churn out the watts. Switching the rear suspension to lockout is also quick and convenient, through the lever on the handlebars. So, you can maximise your climbing ability. The stability of the bike is also something that should be praised – the rear triangle and the rocker link meet in such a way that there is no compromise in stiffness. This just sends messages of force throughout the carbon, which, has been superbly engineered to match the Canyon DNA.

On the open jeep track and for miles on end, the bike could keep spinning the cranks, without any compromise in efficiency. While the bike has a excellent XCO factor, it exhibits marathon details too. Such as the Sella Italia X1 saddle, which contributed to a comfortable journey.

Every bit of the Lux is designed to help you ride faster. And so, the addition of a dropper post on the 7.0 model is no surprise. This has added to the bike’s overall agility, as it now scores high in our books on the downhills. The suspension and geometry are on point, allowing the bike to carve gently through corners and over rough terrain. Once again, very nimble and agile handling is key to creating a good XC bike, and Canyon sure do understand this.

The one thing we’d change: The tyres. We feel the Maxxis Aspen – which was the front tyre – was a little sticky and less smooth compared to some of the other tyres we’ve ridden. However, the Maxxis Recon – which was the rear tyre – had bit more of a slippery yet grippy feel, that we think is important to run on a XC bike.

Canyon have down well with the 2020 Lux range. Sure, the colour ways aren’t all that fantastic, but they’re dam good, dual-suspension race bikes! German engineered to put a smile on your face. Get the Lux 7.0 if you’re looking for a reliable and fast XC race bike, with a not-so-bad price tag. In fact, it’s really good value. Even if you do want the carbon wheel version – the Lux 8.0 – you can get it for roughly 10k more in South Africa.

Price: ZAR 48 499 excluding shipping, packaging, VAT, and import duties. With all that we estimate around ZAR 70 000.

P.S. Canyon have just launched their ZAR pricing on their website!