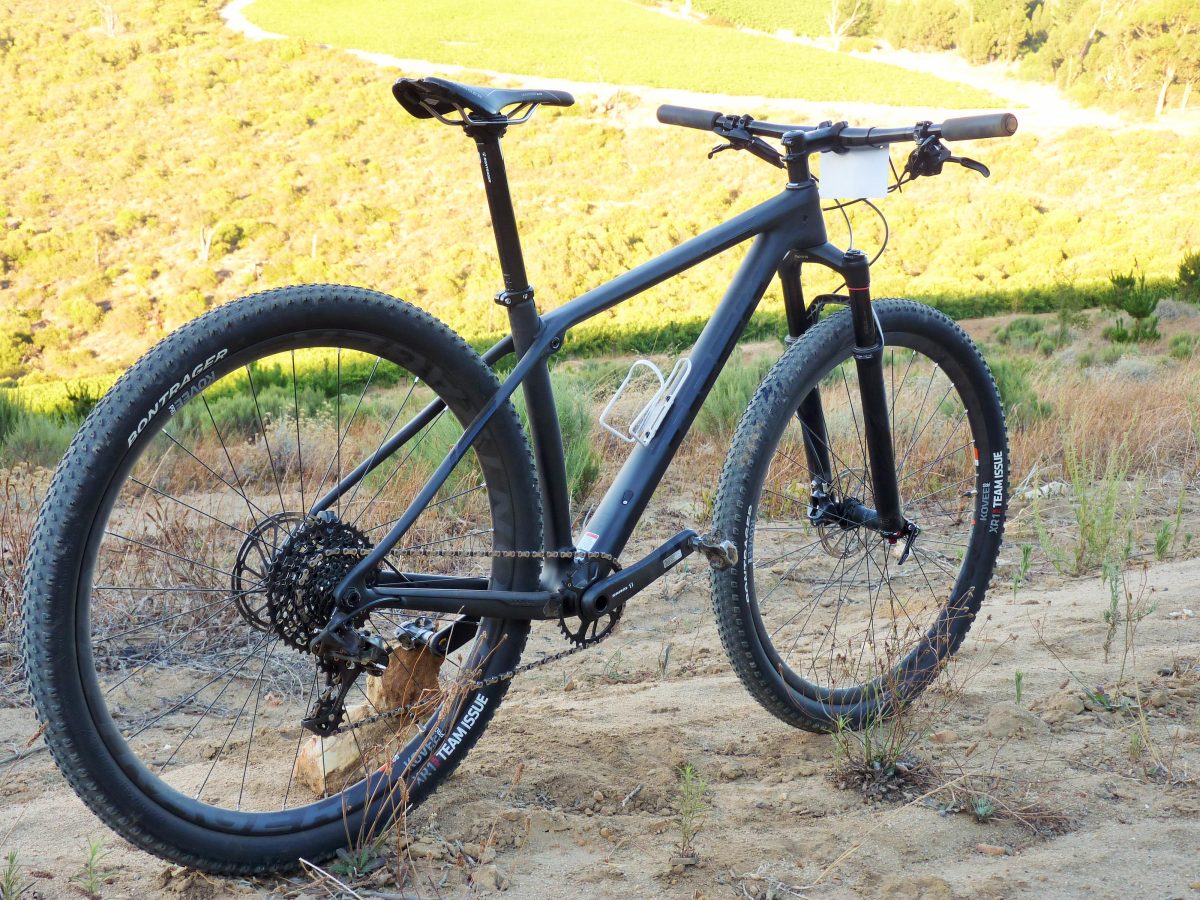 The Trek Procaliber 9.8 SL is undeniably the most world-shattering hardtail, to ever hit the industry! Its super-charged nature, redefines everyone’s perception of when, where, and how you ride a hardtail.

The Procaliber 9.8 SL is best described as a bike with an infinite depth of valour. Like an experience battle-hero, except with a newer, energetic heartbeat. Personally, I’m awfully tempted to buy this action-packed hardtail, over any other dual-suspension mountain bike. I mean, Trek clearly approached the design of this bike, with the attitude of; “Who said hardtails can’t be forgiving?!”

With my first glance at the Procaliber 9.8, I couldn’t help but be fascinated with Trek’s IsoSpeed technology. The science stuff behind this exclusive feature, involves decoupling the seat-tube from the top-tube. This provides the freedom required for the seat-tube to flex according to the instantaneous force.

IsoSpeed technology delivers flawless vertical compliance within the carbon frame’s shape. Reducing fatigue on the rider. From my experience, I found there was no sacrifice in the bike’s capabilities. Confidence was on point, as was the nippy feel that you’d expect from any hardtail. I would go as far as to say that the Procaliber 9.8 SL can be used for races, that are 5 hours or longer! My max ride on the bike, was 4 hours. And even still after that elapsed time, the bike felt cushy enough to press on.

Trek’s Procaliber 9.8 frame is made from OCLV carbon fibre. Or put plainly; the type of carbon that stretches the very limit of how light manufacturers can make their mountain bike frames. To shield this carbon and keep the frame lasting longer, Trek brought in their Carbon Armour technology. Basically this technology, absorbs most of the impact coming from any unwanted projectile, that would dare to hit the direct carbon layer.

OCLV Carbon fibre, is certainly not skittish. Especially when formed in the tube shapes of the Procaliber 9.8. The carbon is built to endure the test of time. Plus, I ran a test to see just how much energy this lightweight frame will save you. So the frame weight, with all components equipped except for the wheels, is 5.5 Kg. Then you’ve got Boost 148 technology on the back wheel, which will inevitably magnify your power output. Not to mention the frame’s incredible stiffness. Now, I rode a specific trail that I would normally ride with my hardtail in 1:27:15. When I piloted the Procaliber 9.8 along that same route, I ended up riding it in 1:17:33! Seconds and minutes, don’t lie! If the frame saved me that amount of time, and ultimately energy, then all that technology is being put to good use.

The Trek Procaliber 9.8 SL, featured some eye-opening wheels! Bontrager’s Kovee Pro TLR wheel-set was the topic of discussion. Made from OCLV carbon fibre, and with a rim inner width of 22.5mm, the wheels themselves proved to be balanced. What I found to also be an asset to the wheels’ superior stability was the way the engineers managed to create this wheelset with a spoke-bed off-set.

As far as experience goes, I’ve grown quite fond of Bontrager’s Kovee Pro TLR wheels. As they always deliver a gutsy, fast-paced ride, that gets the adrenalin pumping properly! The light-weight, and increase in overall bike stiffness, mean you can motor up climbs, and snap through corners with unmatched speed.

The Ride – On the UCI Stellenbosch XC track.

The Trek Procaliber 9.8 SL was undeniably built for XC trail blasts! Like every XC course built, there’s always going to be a climb or two. I was lucky enough to be able to do some testing of the Procaliber on the UCI World Cup XC track in Stellenbosch. With two 2 weeks till the big World Cup event, it was I that was the fastest rider on the course. Obviously not nearly pacing as high the pro’s, but still. I managed to get a detailed feel from the bike, with regards to its XC nature.

The SRAM X1 1X11 group-set, provided a spot-on gear ratio. Admittedly, due to being an 11speed setup, the bike wasn’t the easiest thing to pedal up technical climbs. However, I do believe that the 32T chain-ring in the front supplied some relieve in making the cranks pedal “easier”. The stiffness of the Trek-made, carbon, frame, was felt through-out the climbs. I just had so much more control over the bike.

Now, let’s progress along to the single-track part of the test. Aboard the Trek Procaliber, the stem angle and original handle-bar upsweep, really stood-out to me as an asset to the handling of the bike. Especially along high berms. The bike almost naturally chose the right line, and I could simply settle, and lay down the power when needed.

The part I’ve been waiting to tell you about; the downhill sections of the track. Please note that lots of rocks were included! Let’s face it, the Procaliber wasn’t the smoothest over anything. But that IsoSpeed technology sure brings on the flexibility-absorption aspect. That being said, the bike felt like a dual-suspension, with the nimble behaviour of a hardtail. The geometry of the frame, also allowed the back wheel of the bike to move freely, therefore adding to the speed at which the bike responded to my movements. In short, I wasn’t shying away from the tougher line, just because the bike was a hardtail!

It’s hard to fully describe the eclectic feel of this hardtail. However, I’m sure of one thing.; you can’t choose a better hardtail, race bike, to tackle a cross-country MTB track with! You can power up and along any MTB track, and simply not feel the fatigue of the taxing conditions, thanks to the IsoSpeed tech. Just look; Anton Cooper chose it for the UCI Stellenbosch Epic World Cup

The Trek Procaliber 9.8 SL, is well kitted out for its price. I mean you’ve practically got the best light-weight to high-performance components that any hardtail enthusiast could ask for!