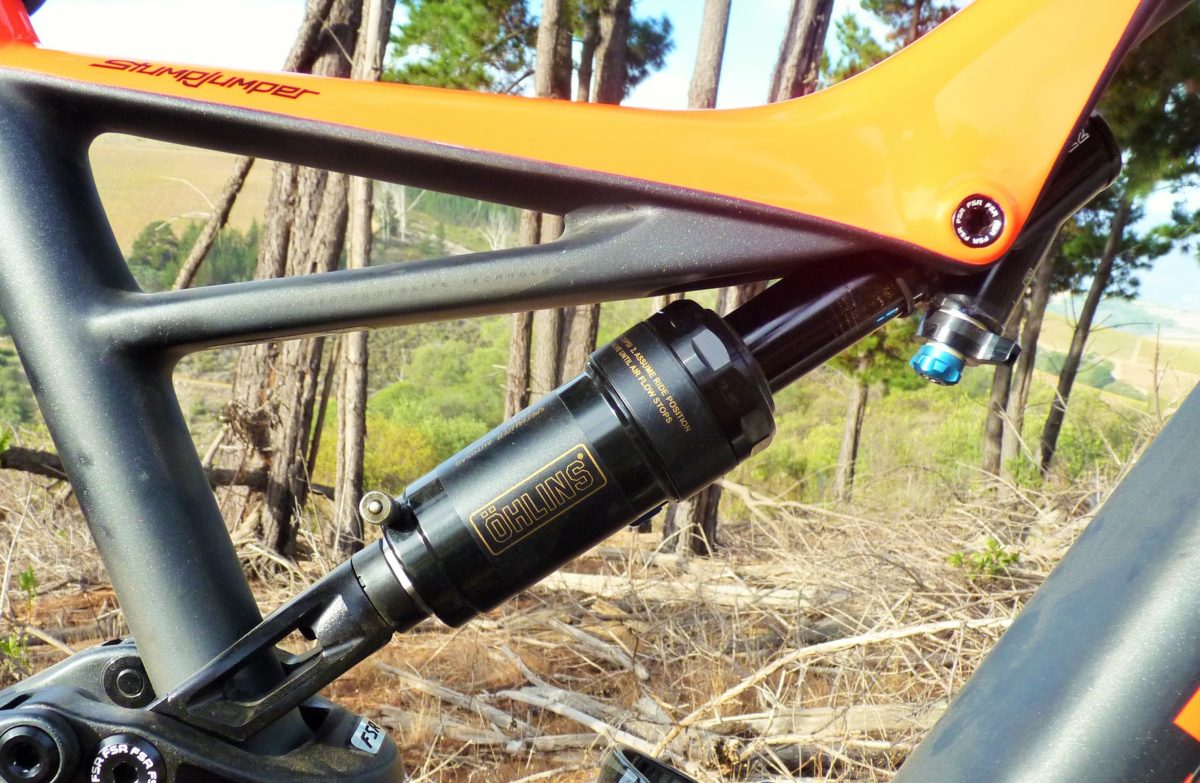 Ohlins and Specialized combined their years of know-how and created one of the best rear shocks ever. Ohlin’s originally had the Custom STX 22 rear shock model designed, built and sold as their own standardized shock. However, most recently in fact, Ohlins signed a 10-year contract to supply Specialized with rear shocks on their top-end bike models they produce.

I had privilege lately, of being able to test Specialized’s S-WORKS model StumpJumper, which featured this Ohlins Custom STX rear shock. The concluding thought I had towards the end of the test, was that I quite enjoyed this rear shock. So, with a little more research, I embarked on a journey of discovery with my sight set on how Ohlins’ shock technology is leading MTB suspension innovation.

Ohlins Custom STX features a one-piece-body and reservoir design, for minimizing weight in almost every aspect of the shock. This all-in-one design, swanks a strong body, making the shock more effective.

The STX’s principle performance, is mainly thanks to NITROS that fills the air chamber. NITROS is less inclined to cause heat in the shock’s core, therefore the rebound is somewhat smoother. Low friction seals also aid the rebound, and in total, create a shock that rebounds efficiently, and sensitively.

I’m too familiar with the STX Damping technology on this shock, but I can tell you it’s incredible! The damper works well so that the closer you get to bottoming-out on the shock, the slower the compression rate. From my experience with the STX, and I’m purely speculating; with roughly 30% of the shock travel left, the compression speed decreased dramatically. Now, this is not necessarily a bad thing, since you don’t really want to bottom-out the shock. It still gives you a good amount of travel freedom, before that level though, which is good.

Tuning Ohlins Custom STX was a bit tricky, simply because I was used to the tuning systems of RockShox and FOX. Eventually, I figured it out though, and I must say I was very finicky about my settings. I wanted the settings to be precisely right, and with Ohlins advanced tuning system, it was a synch achieving my shock tune.

High speed and low speed compression rates were just as precise. I felt the high speed compression factor coming into effect on downhills. In turn, the overall suspension vibe, was plush, forgiving and confronting. I rode and pretty much felt like I was soaring on wings of eagles, or in this case wings of Ohlins! The bumps just seemed to shrink.

The Ohlins Custom STX was not all plush and games though! There were times when I set the shock to be harder, especially on those steep up hills. It cooperated really well with my legs, letting less energy escape in transfer. It there by helps increase traction on the back wheel.

Overall stability of the STX was complementary. I mean, with a 135mm travel set-up and an average weight of 340g, there was no way I felt it didn’t benefit me on the ride.

I tested this rear shock on the S-WORKS StumpJumper FSR 6Fattie; it was inevitable that the bike would feature AUTOSAG technology, and then Specialized’s RX Trail Tune. So there were those variables to consider when I was testing the shock. In the end, it could only have added to the shock performance and therefore my performance.

The Ohlins/Specialized Custom STX was extremely versatile. The 3rd air chamber makes it perfect for Enduro & Trail disciplines. I’m looking forward to seeing Ohlins grow in South Africa, and what better way to start by signing a 10-year partnership with Specialized.