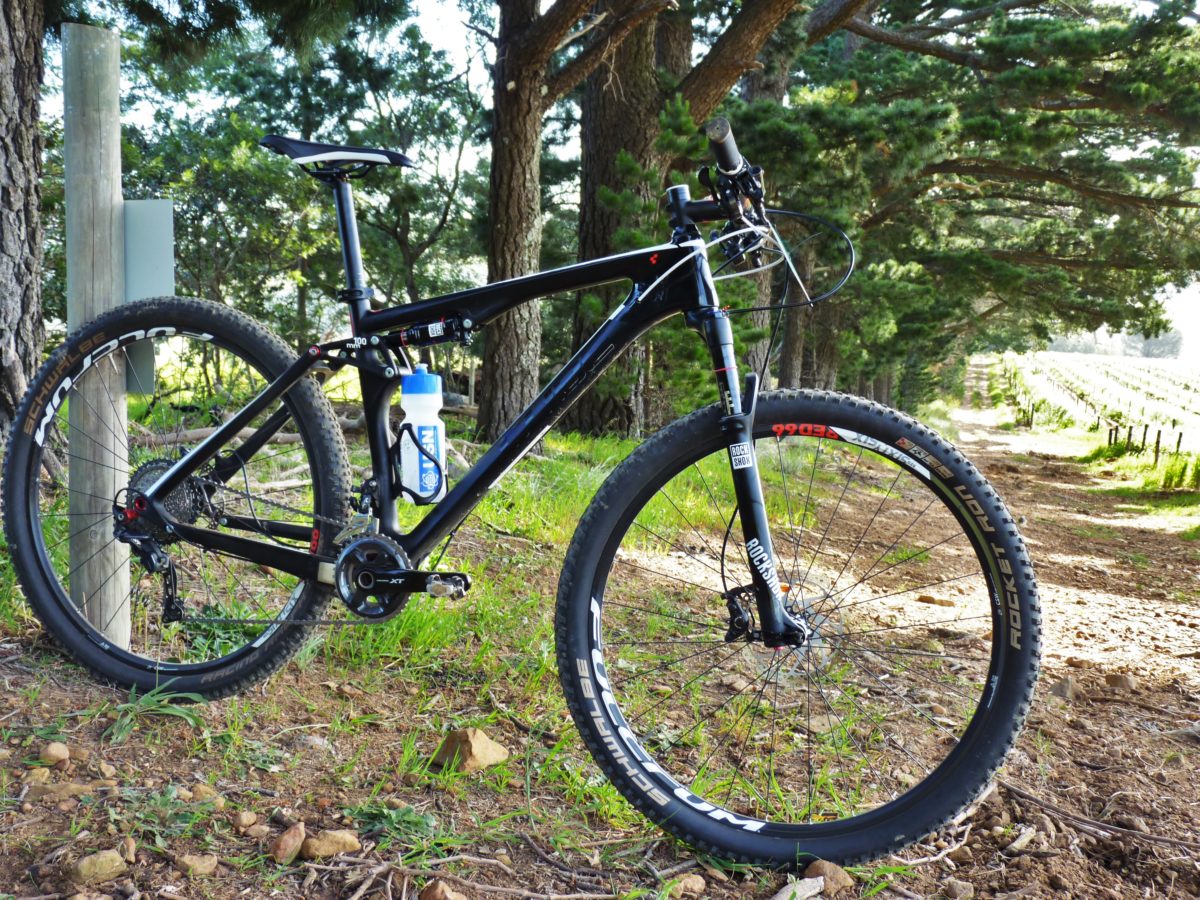 Cube is not an overpopulated brand in South Africa, but you can’t help but look at them with respect when you see what they’ve done internationally with the brand.

While Cube is commonly known for their innovations on enduro bikes; they are making head way in improving their cross-country models. An example: The Cube AMS 100 Race.

When we first saw the AMS we took note of how Cube has positioned the rear-shock relatively close to the top-tube of the frame. Packed pretty tightly! We also noticed the angle of the suspension linkage and how all the shock in the back is absorbed in-line with the shock and parallel to the top tube. While this kind of geometry is common on cross-country bikes, it explains why most xc bikes handle and perform like hardtails.

That’s the point that we’d like to get across. The Cube AMS felt like a hardtail! At times on the trail we hardly knew there was a rear shock operating! I don’t know how Cube engineer the geometry on this frame, but they sure got it right! After all, you only really need a rear shock for going downhill and thrashing over sharp bumps, on an xc bike that is.

The AMS 100 frame is constructed fully (Front and Rear triangle) from Cube’s C;62 carbon fibre, and features a carbon suspension linkage. This is the prize gem for any weight weenie if you ask me, and my second favourite thing on this bike!

As for the rear shock, the RockShox Monarch, features 100mm of travel and 3 settings on the damper: closed, open and pedal. It’s my personal favourite on the bike, because you don’t bounce around in the saddle when using it on open or on pedal as a matter of fact! It’s sort of a “solid” absorption. Perfect for an XC bike!

Things are extra convenient with the remote lockout on the air-sprung Reba. RockShox really got it right on the Reba’s weight side of things; providing high performance and light weight at the same time, all in one.  A cross-country perfect!

The Shimano Deore XT gear system provided a 2×11 combo. Once again; a perfect cross country choice! The Rapid Fire shifters shift within the nanosecond with the mutual reflexes of the XT derailleurs.  Another feature we really liked about these shifters was the added grip on the shifting paddles, this is new on the XT shifters and we expect to see more of this on other model shifters in the future.

The Cube AMS 100 Race comes standard with Fulcrum Red 66 rims with Rocket Ron Schwalbe tyres. Apparently people have complained about the Fulcrum rims saying that they’re too heavy and this can sometimes off-set the total balance of the bike. We do find this to be true, as they also impact handling and manoeuvrability of the front wheel quite hectically. Cube says they are working on the problem and I have full trust that they’ll sort it out properly by early 2017.

Don’t get me wrong; the Monarch performs pretty arrogantly on downhill sections and absorbs rocks and roots like it’s nothing! We stiffened the Monarch on climbs and set it in pedal mode when we were cruising on straights. It performed exactly how we’d expect it to. In my opinion, using the Monarch on the AMS 100 was some pretty good thinking by cube, as they fully understood the concept of a cross country bike.

The angle of the head tube could go a bit steeper, but this doesn’t really hinder the performance of the bike on switch backs too much. Steering is not far short of handling a sports-car! It does however determine your position on the bike, which feels more like a trail-bike position than anything. This is debatably a good thing, so you feel more comfortable on race days and will be able to go the extra mile.

That being said, the gear ratio was spot on! We had more than enough gears to make it up a 415m hill with a 12% grade technical climb. You’ve literally got a gear for every piece of terrain. Like we said; the derailleurs instantly geared up or down with the flick of a shifter.

The Cube AMS has only one thing on its mind and that’s speed. We pushed it to the limit on a flat section and felt every watt go into turning the wheels. (With the rear shock in pedal mode)

The reason we describe the Cube AMS 100 Race as a perfect XC bike; it handles like a hardtail, has light weight components and it just looks like a pure racer!

It’ll be interesting to see what the newer models of this Cube will feature, as we know there is still room for improvement. The AMS 100 Race rivals the Specialized Epic Comp with its performance and price. For me, the Cube AMS  100 Race is the best XC bike I’ve tested this year! Definitely a bike worth buying!