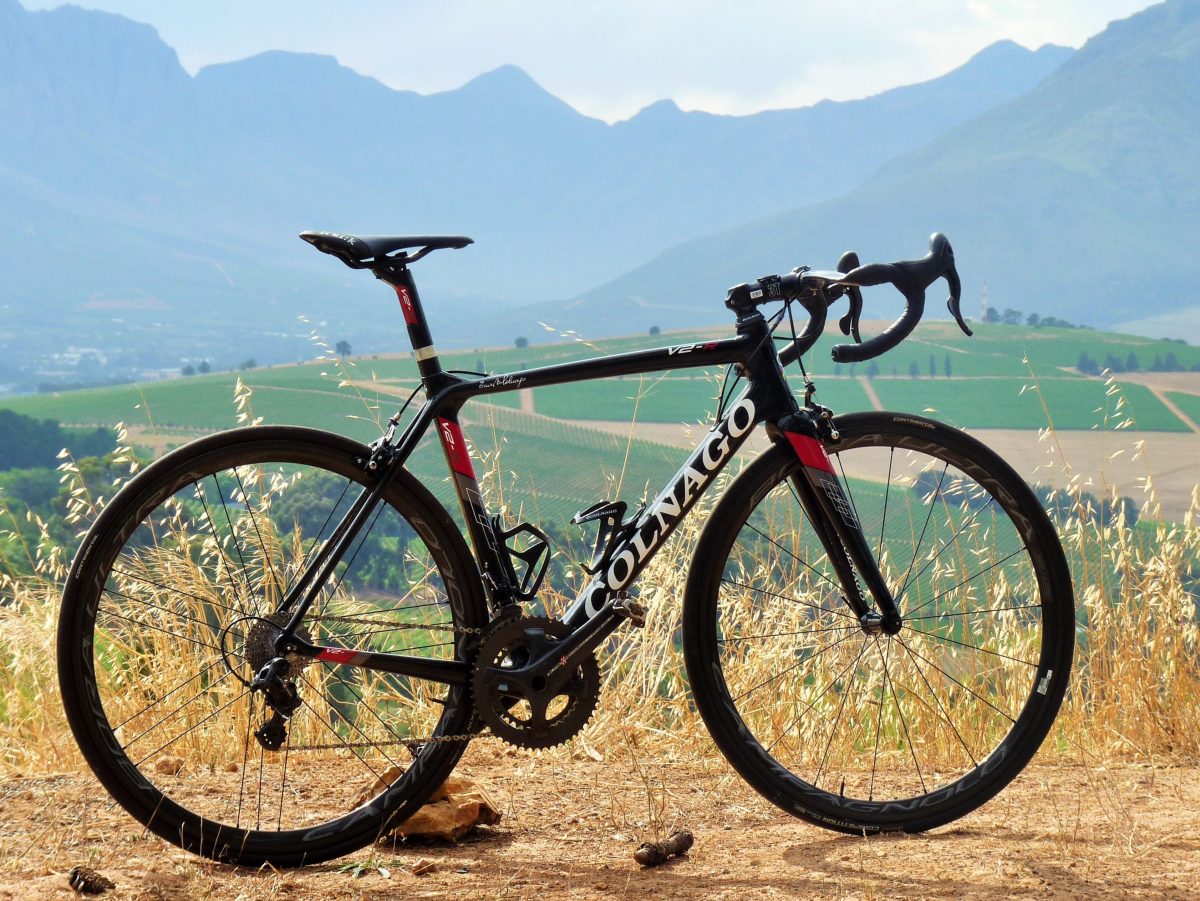 The Colnago V2-R is the only road bike, that comes definitively close to godliness! And if it were a god, it would probably be the god of speed! Everything about the V2-R captures that Italian sweetness, from its legacy brand.

Colnago launched the V2-R at the 2017 Tour de France, where we also saw Louis Meintjes pilot one through the taxing stages. It’s certainly got the miles and experience, if you ask me! With that I can solidly proclaim; that hurtling this Italian super-bike, through our test course, was an infinite joyride!

The V2-R’s frame is made with Colnago’s top carbon fibre. Although its manufactured in Taiwan, it still comes fully charged with that Italian power. The carbon composition of the frame, is like no other! It provides the perfect stiffness to weight ratio, for a bike that does not fatigue the legs much and can do the speed of champions.

Colnago’s V2-R is the worthy successor of their V1-R model. When comparing both bike models, you find that the V2-R’s frame is surprisingly not lighter than the V1-R. However, it has been engineered stiffer. The V2-R frame weight comes in at a feathery 835-grams for a medium frame, while having been made 13% stiffer in Bottom-Bracket area and 4% stiffer in the steering tube. All are step-ups from the V1-R.

Some other new features you might find on the V2-R, is the integrated seat clamp, for improved aerodynamics. Plus, the internal cable routing supplies a neat look, all-frame around. The new direct mount brakes, also offer a simple braking system, and reduces the use of unnecessary bits and pieces.

Equipping the V2-R with super aerodynamic, carbon fibre, handle-bars was a fine choice for accompanying the bike’s sleek look. The 3T AERONOVA Carbon handle-bars, were the ones to meet my hands on the test rig. They’re extremely comfortable, especially when shifting your hands towards the middle of the bars. Your hands almost naturally tend to find the right groove for your riding position. Even when hitting the dropper bars. I enjoyed the ride with these bars on the V2-R, definitely worth the buy!

While Colnago’s V2-R is not classed as an aero race bike, it does exhibit some eye-catching aero designs. Upfront, the V2-R’s wing-shaped fork, was great for piercing the air. While the wheels made the world’s difference in reducing drag, due to the dense design around the tyre and narrowed off tail at the spokes. The dropper bars are smoothed over, to prevent the air from being trapped and bunched up, allowing for a natural airflow over the bike. The downtube was also squared off on top, while neatly rounded up front. This provides excellent airflow around the bottle cage area.

Okay, so let’s get stuck in with how the Colnago V2-R performed. On climbs, the light-weight nature of the bike, made for extra fast riding. In fact, the V2-R was quite the confident climber, never shying away from a challenge. The 2×11 gear setup, with a 11T-29T cassette, was fantastic for steep sections. I never felt as though I had to crawl uphill; there was always the right gear for the road ahead. Sure, it does work your quads, but the geometry of the bike gives you an optimized climbing position.

On those open flat-sections, there was nothing faster than the V2-R! The bike allowed me to get into an aggressive riding position, where also finding my precise cadence was a breeze. I could simply cruise and then still take ground against my mates. In crosswinds and headwinds, which were inevitable on my test, the V2-R’s aero features were enough to streamline me along the road.

I’d be lying if I said the Colnago V2-R doesn’t spark up the stoke on corners! It was so fun to carve through turns and negotiate the ideal line. Even though the bike itself is designed for longer, and more serious days in saddle.

Heading downhill opened the door to show the V2-R’s capabilities of having forgiving compliance at high speeds. So while clocking 70km/h the bike maintained its sure self, which in turn, gave me excellent control. Rest assured, that the Colnago V2-R is incredibly fast downhill. I found myself hanging on for dear life on some sections!

The ride was exceptional. However, the only thing that I didn’t really come to terms with, were the calliper rim brakes. My hands did work quite hard to bring the bike to a stop. Colnago seems to have already begun working on hydraulic disc brakes for the V2-R, which will eliminate the fatigue on your hands entirely. I’m eager to see that model come to pass!

Okay, lets focus on the endurance factor of the V2-R. After all, it was raced in the Tour de France, which we all know to be muscle draining. On my test, the stiffness provided by the carbon components and top-notch frame, placed those watts of energy precisely where they needed go. Despite repositioning myself on the dropper bars, the V2-R maintain its structural stiffness throughout the frame. That being said, it also maintained its level of comfort. It’s not like you change your riding position, and then experience a completely different ride performance. The Colnago V2-R was consistent, no matter what riding position I was in.

Riding a Colnago V2-R, is an experience that’ll keep you praying for more! Granted, it’s not the most aerodynamic road bike out there. However, it performs in such a manner to create that ideal bridge between comfort and aerodynamics. Making the V2-R the top choice for endurance road racing or simply hitting the road for as long as your legs will carry you.

My test-rig was kitted out with really high performance components. Literally having carbon fibre everywhere! However, the Colnago V2-R is mainly sold as a frameset. Meaning if you really want a Colnago, but don’t want to kill the bank account, you can kit yours out with a cheaper spec. Without losing that godlike performance from the Colnago V2-R!