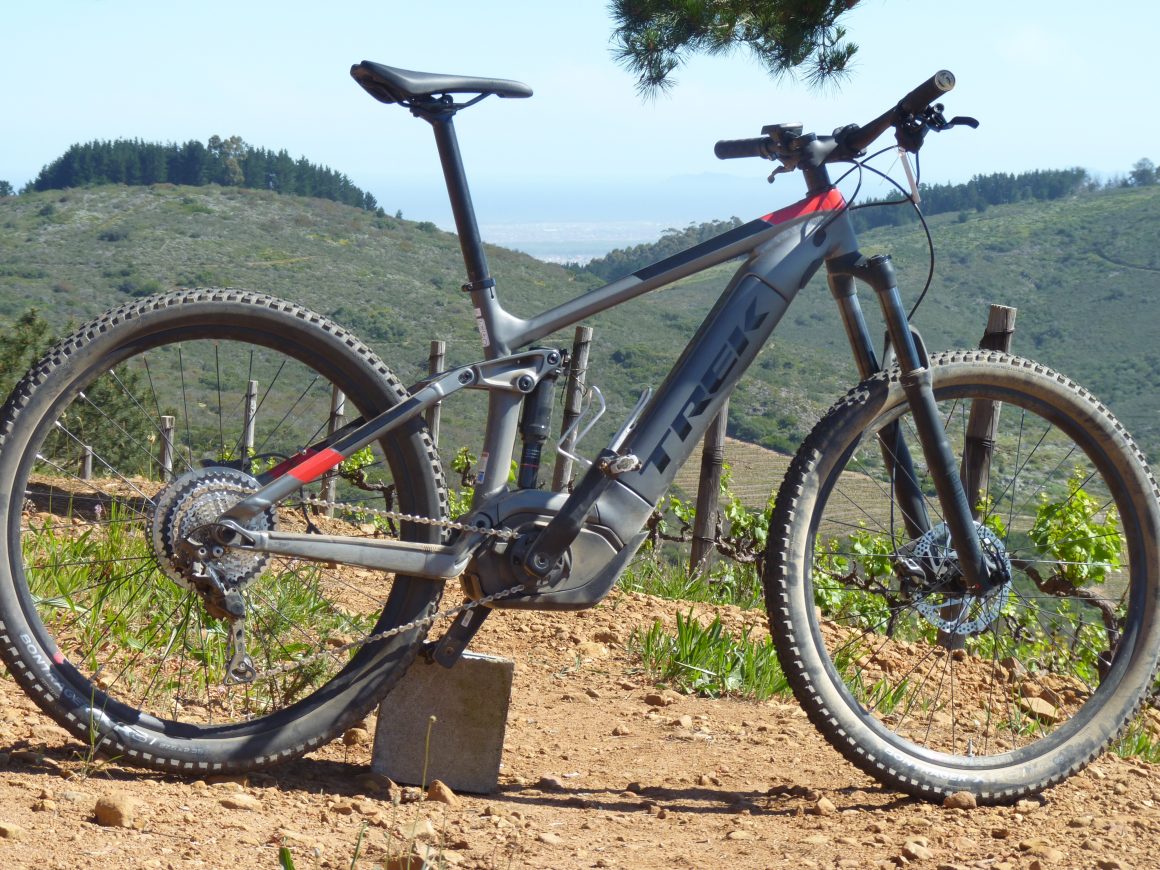 E-Bikes are tonnes of fun. So an E-Bike from Trek must be tonnes more fun, right?! Trek’s 2019 Powerfly absolutely flattens climbs, and tumbles downhill with zero hesitation. With 250 watts of pedal power at your disposal, riding uphill is as dangerous as going downhill!

The Trek Powerfly FS 5 is second highest model in the range, in terms of spec. Right behind the FS 7, which comes out with some better suspension upfront, and an 11spd drivetrain. There is also good news, for the lady mountain bikers out there; Trek offer a FS 5 women specific model. All with the same components as the men’s FS 5, apart from the women specific saddle.

Trek’s Powerfly FS 5 full-suspension, frame bridges the gap between smart integration, and sturdy performance. It offers Motor Armour, and a Knock Block head tube. The Alpha Platinum Aluminium, which Trek swear by, has been manipulated around the motor of the bike. While offering 130mm of rear shock travel. The battery also slots in conveniently from the right-side of the downtube, and can be easily removed for charging. The brand has accomplished this, without compromising on good mountain bike characteristics.

The Bosch CX Performance motor spits out 250 watts of assistance. It comes with Bosch’s gear-shift detection technology. Which holds back strain on the chain of the gear-set while it hops from one gear to another. The motor itself is governed to cut out at 25km/h, yet still amplifies your pedalling force by 300% in turbo mode. What’s also cool and different about the CX Performance motor, is that it has an intelligent E-MTB motor mode. Which automatically decides how much assistance you need based on the terrain.

As far as battery life is concerned, the Powerfly FS 5 has a surplus of it. The 500wh battery, will give you a max range of 120km – in eco-mode. Usually, the battery is the bulkiest part of an e-bike. However, with Trek’s nifty side insertion on the downtube, you hardly notice it. You can also charge the battery without removing it from the bike. There’s a charging port near the motor, where you can plug the battery in to an electrical circuit.

For a heavy E-Mountain Bike, the Powerfly’s suspension coped with the extra force brilliantly. Truth be told, the RockShox Recon RL fork was E-bike specific, and engineered more stiff than conventional forks. Its 130mm of travel, correspondingly had a distinguishable, smooth, compression. While the rear RockShox Deluxe RL shock, doesn’t include Trek’s RE:aktiv technology, it does come paired with a carbon rocker and Mino-Link. Does that make up for the missing RE:aktiv technology? We wouldn’t say so entirely, as the shock did feel a little sticky sometimes.

The geometry that Trek have managed to pull-off with the Powerfly, impressed us greatly. The E-bike had a 67.4-degree head-tube angle, with a BB height of 33.3 cm. So the bike could clear the terrain below, with ease. A chain-stay length of 47.4 cm allowed the bike to handle like a traditional trail bike, by giving responsive traction on the back wheel.

There’s“power” in the Powerfly’s name. Needless to say, on climbs the bike waspowerful, and lethal. The pedal assist pretty much sprinted the bike uphill,with hardly much effort on our side. However, the only that held us back alittle, was the 10 speed gear-set. Yes, 10 gears are enough when riding an E-bike. But for the terrain we were on, mainly steep and technical, the drivetrain seemed a bit limiting.

Whilst flying during your climbing interval is certainly not far-fetched on the Powerfly, it is equally as fast on the downhills. The motor helps carry good momentum, but relents its power when the speedometer hits 25km/h. We can understand why. Since you don’t really need much assistance going downhill.   The suspension also proved to be superbly forgiving, despite the added weight of the bike’s battery and motor. One thing that we might change, however, is the tyre size. A wider tyre will add loads more control on descends.

The same can be said about how the bike corners through single-track. Wider tyres will add more control and stability, as the E-bike did tend to over-shoot corners a little. We know E-bikes can’t all be perfect. But the Trek Powerfly FS5 needs more potent brakes. Perhaps a higher model brake-set in the Shimano hydraulic disc range will do. Apart from adding stronger brakes and fatter tyres, the Powerfly is loaded with rad-ness. And the ride quality of the bike along the narrow trail, is quite golden.

The Trek team have integrated the motor and battery into the Powerfly’s frame, in a smart manner. As a result, a full-on focused E-bike bike was born. There is an atmosphere that implies that Trek have skimped on higher spec’d, mountain bike, components. But let’s face it, you’re not going to buy the Powerfly FS 5 to be the next Nino Schurter. You’re going to buy the E-bike, to have an awesome time on the trail, and on that level, the Powerfly more than delivers!