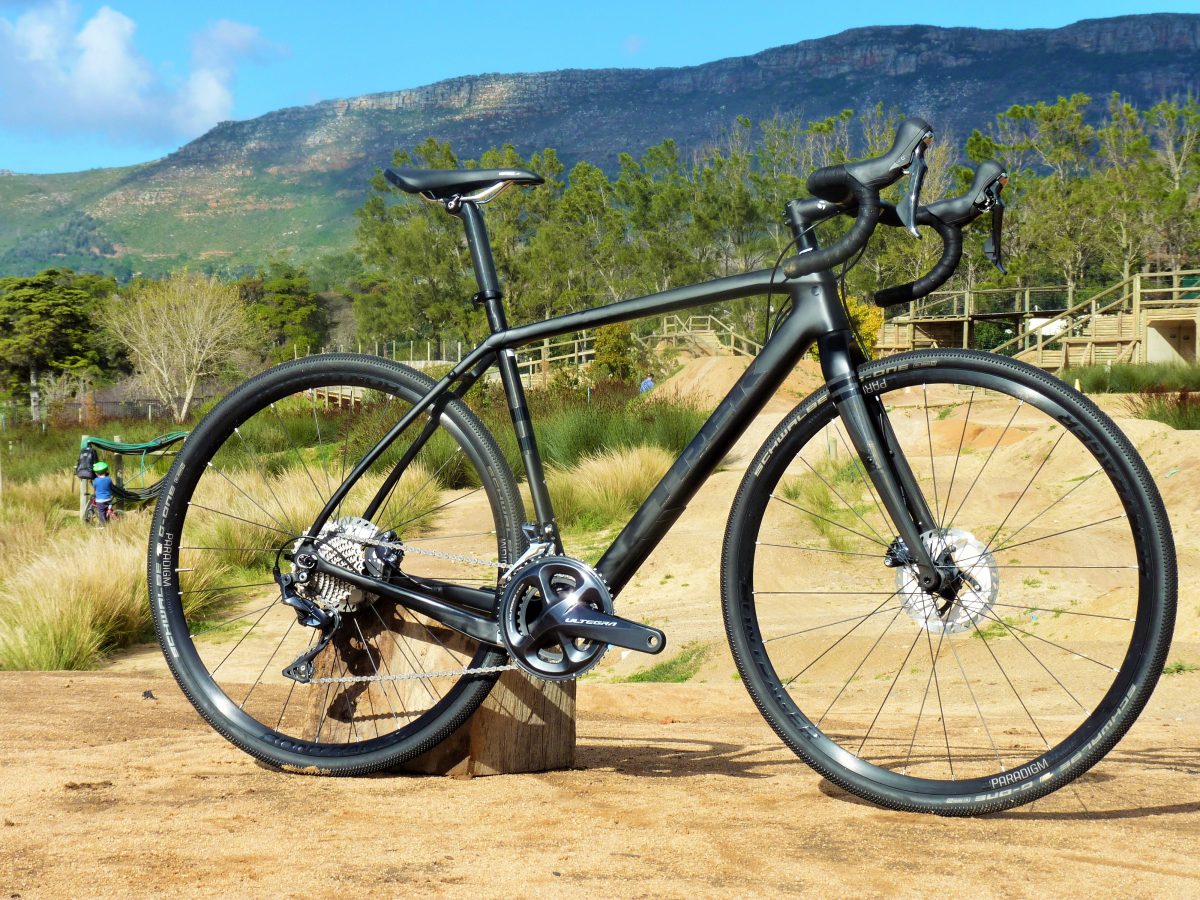 The 2019 Trek Checkpoint SL6 is a gravel-bike that has earned the American-muscle badge here at our test HQ. Trek’s confident approach to fabricating bike technology, has yielded a gravel bike unframed in its ride style. It might be the many-few cyclists that passed by, bawling “gravel-bike, gravel bike!” that suggested this bike has already become an icon. 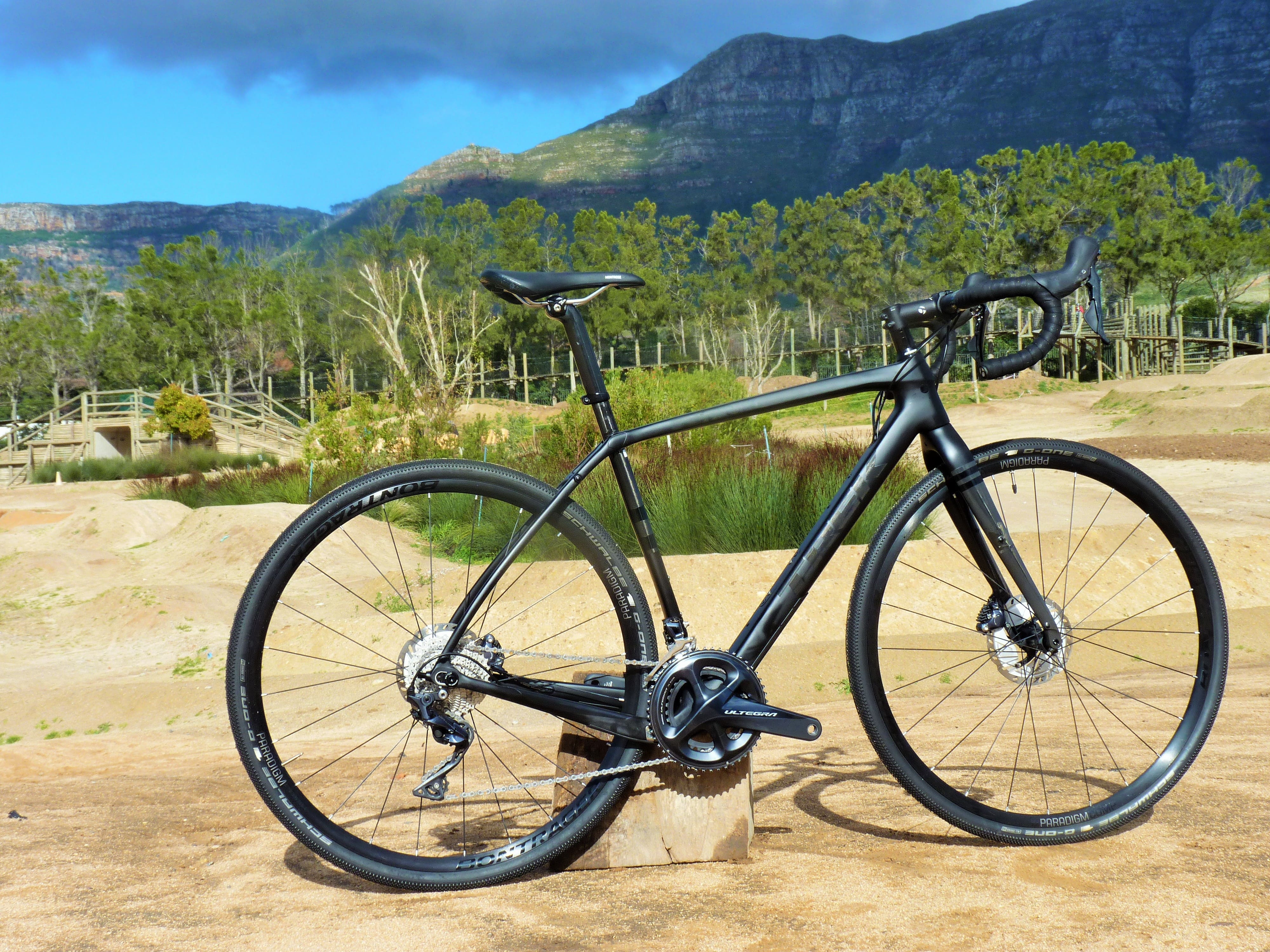 The Trek DNA runs thick through the Checkpoint. It shadows a similar frame design, to the Domane. Except for its wider wheel-base and overall, bulkier profile. Trek have also revealed the Checkpoint in 3 models; the Checkpoint SL6 (which we have here), Checkpoint ALR4 (basically the alloy version with lower spec) and Checkpoint SL carbon frameset.

Trek dialled in major tech benefits on the Checkpoint’s frame. The 500 OCLV Carbon Fibre that embodies the frame, keeps the weight of the bike low. While Trek’s IsoSpeed technology creates compliance within the triangle of the frame. Adding on to the forgiving nature of the frame, is Trek’s Ride Tuned seat mast, which slides over the seat tube, instead of sliding into it. Unlike most conventional bikes. 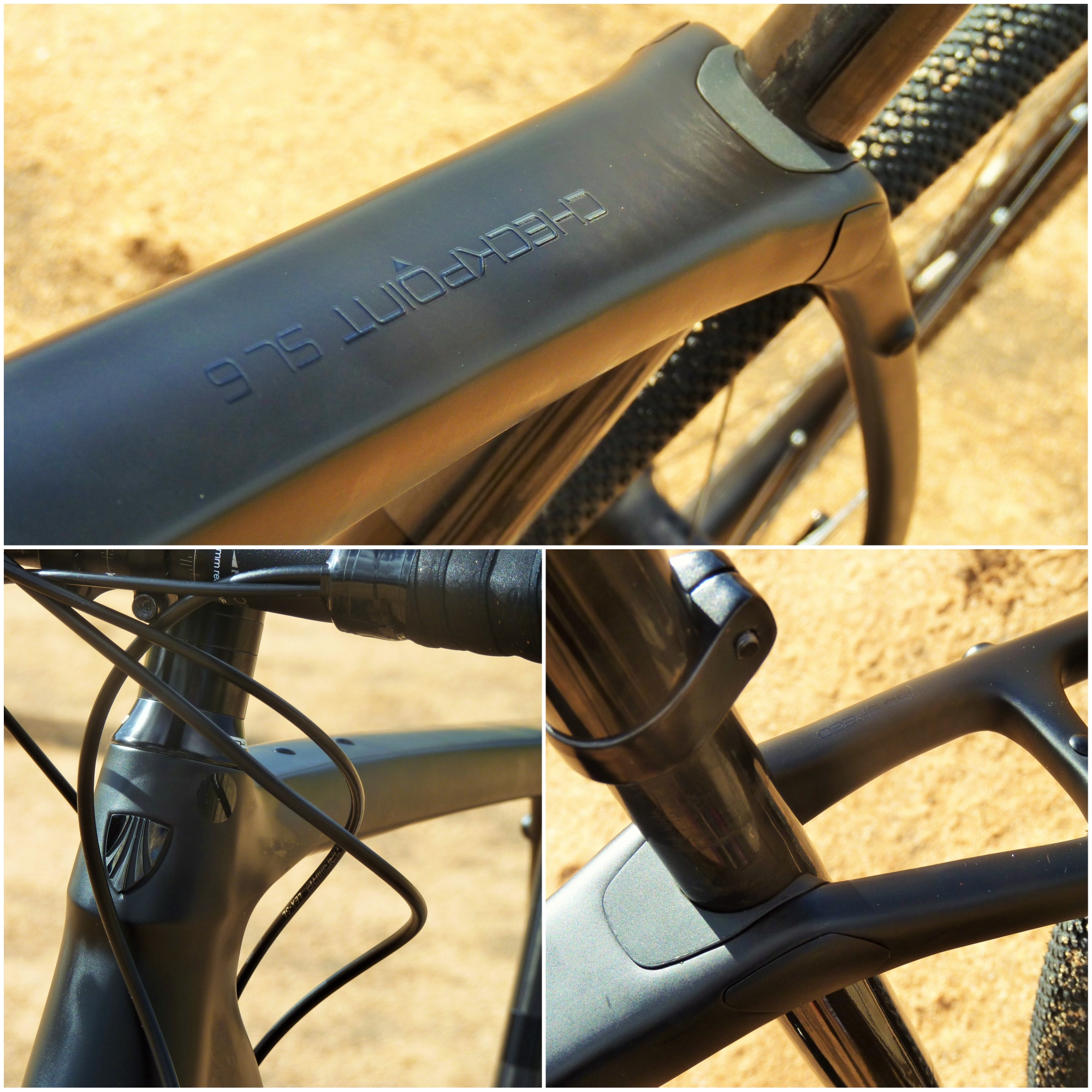 On the fork and chain-stay, the bike is complete with flat and direct disc break mounts, for a more responsive braking system. Other features certainly worth mentioning; include 12mm thru-axles, downtube Carbon Armour, Strangle Hold dropout on the rear wheel, and Blendr compatible stem.

Bontrager’s Paradigm Comp TLR wheel-set is so lightweight and stiff, we had to double check to make sure it wasn’t carbon! This Alloy wheel-set has certainly raised the weight-factor bar quite high, and by making use of an off-set spoke bed, the rims themselves are extra stiff. In terms of weight figures, you’re looking at about 755-grams for the front wheel, and 920-grams for the rear wheel. 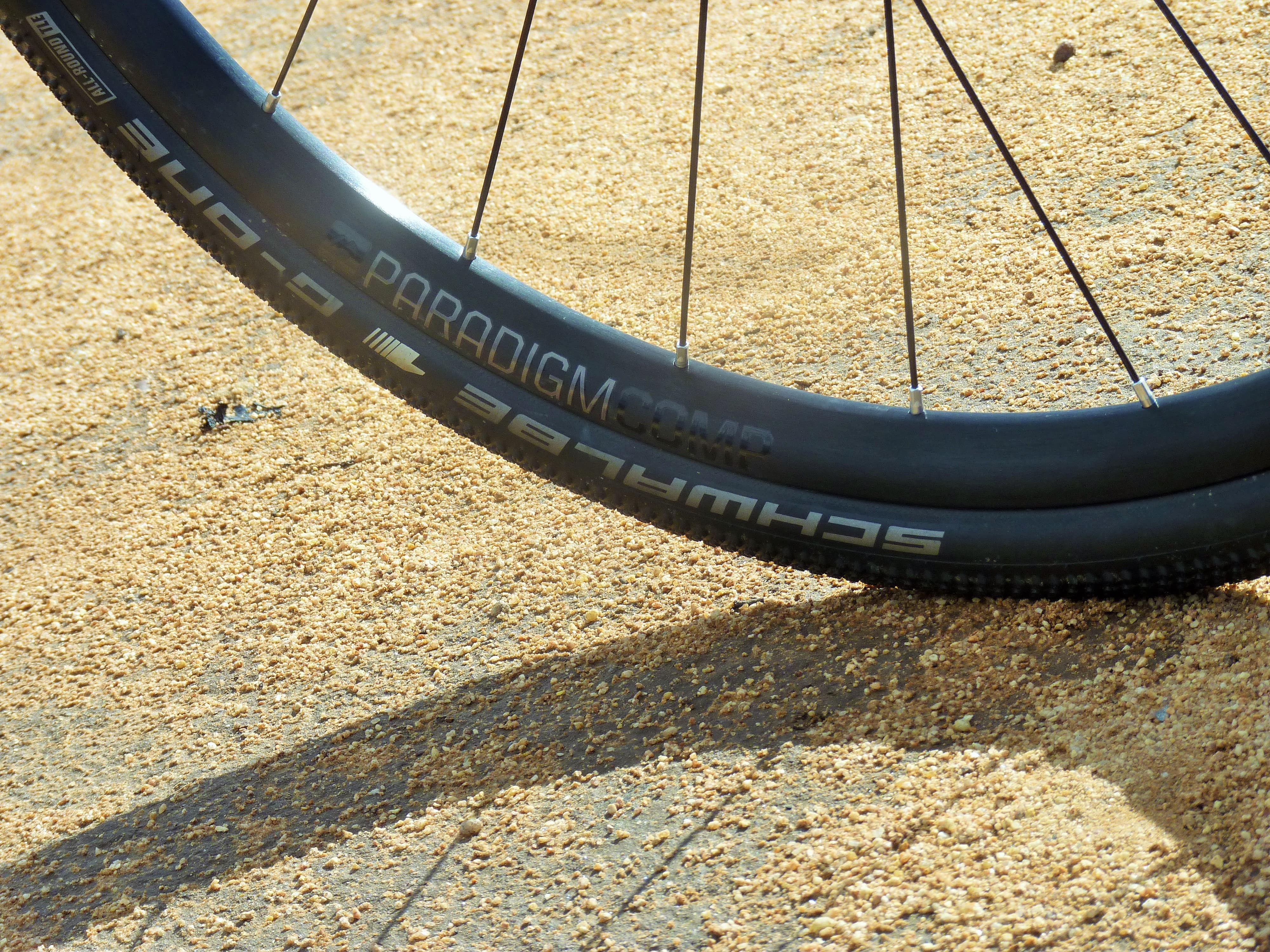 The entire wheel-set is tubeless ready, and comes rubberized with Schwalbe G-One All-round tyres. From a buyer’s point of view, the 700c X 35 tyres are ideal for road and trail grinding. They also seem to hold their grip well over time, and not be worn out by constant, fun, wheel skids.

The Shimano Ultegra gear-set matches the lightweight theme of this gravel bike. With the rear derailleur featuring Shimano’s Shadow technology, for a more compact look. The crank arms are constructed from feathery material, without feeling flimsy when laying the hammer down. Then serving the Checkpoint’s purpose well, is the 2X11 gear ratio. The crank chain-rings set is a 50T/34T pair-up, and the cassette ranges from an 11T till a 34T. 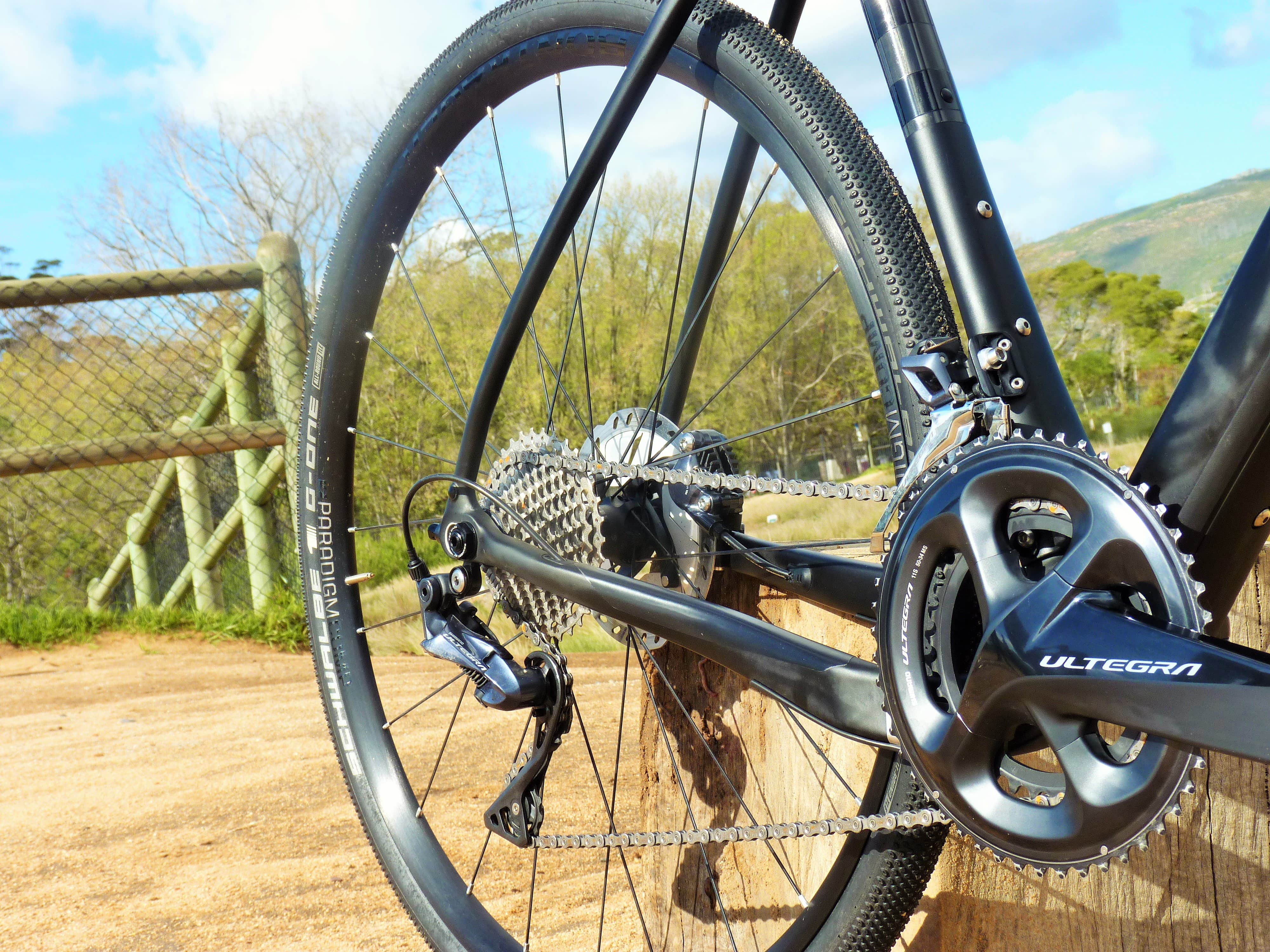 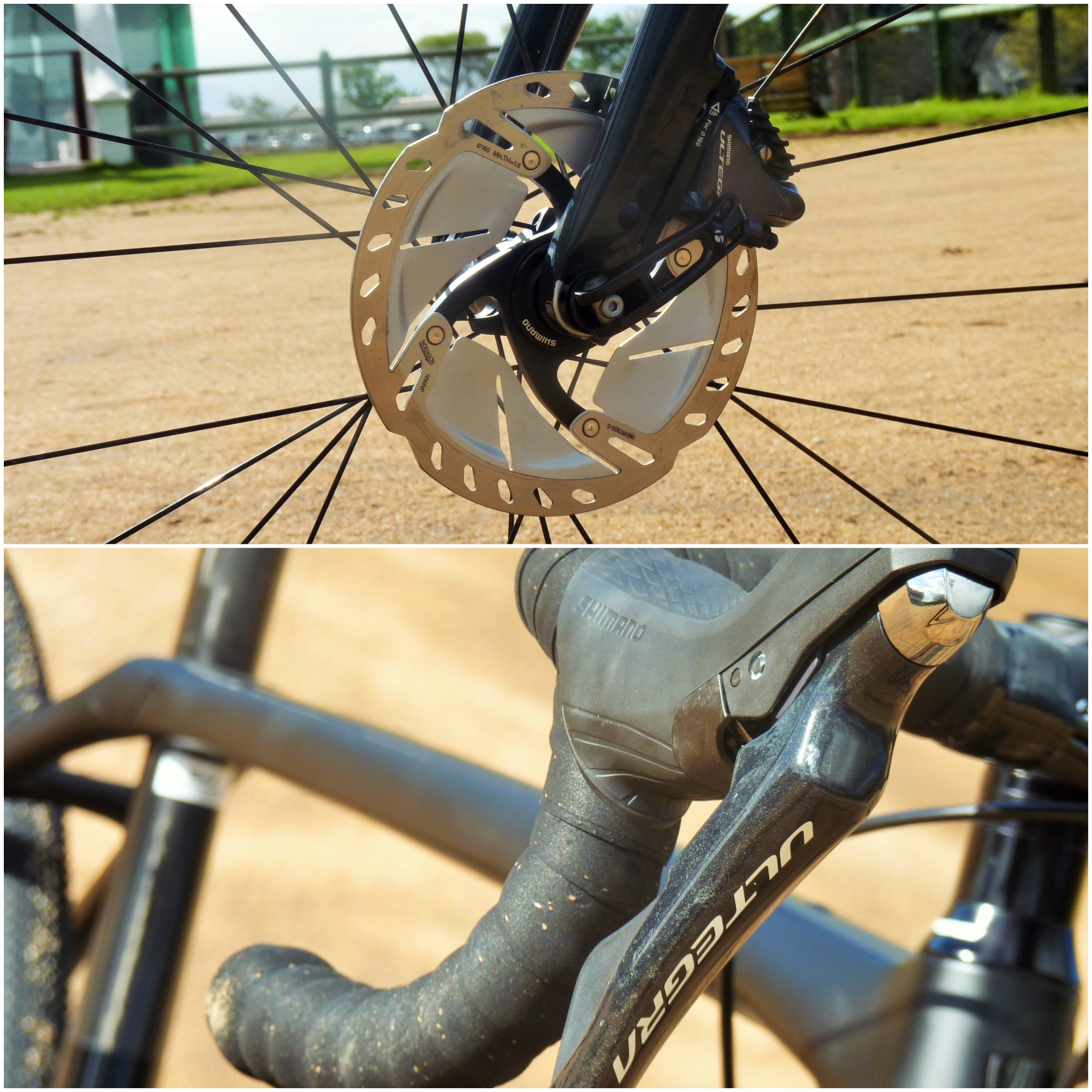 While the 2019 Trek Checkpoint has a solid, beefy build, its geometry makes you feel quite sporty. A 73.0-degree seat-tube angle on a 58cm frame, meant we could distribute our weight evenly over the front and rear wheel. The handling of the bike was affected by the 72.3-degree head-tube angle, in a positive way, and made the bike really responsive.

Trek’s 2019 Checkpoint SL6 exhibited momentous, stiffness on ascents. Whether on gravel surfaces or neatly paved tar, we could feel Trek’s unique carbon layup on the bottom-bracket, provide a sturdy frame base. The wheel base, rather counteracted flimsiness of the bike. When we stood up, out of the saddle, the Checkpoint was the most reliable to let every pedal stroke be put to use. 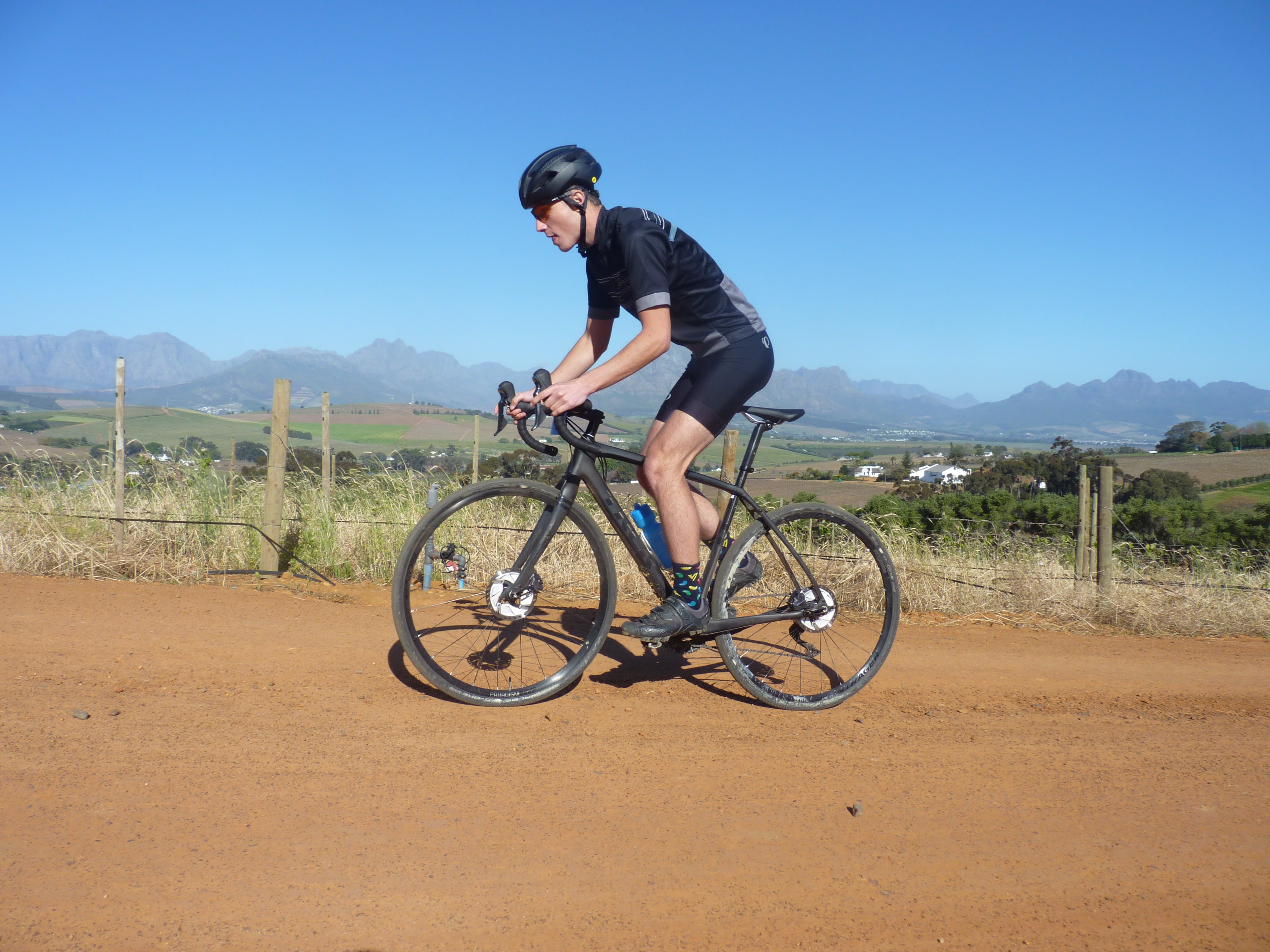 The 2×11 drivetrain, that propelled the Checkpoint forward along flat sections, gave us bridge between precision shifting and excellent cadence. It was very easy to knock the chain up to the outer chain-ring, and crank out some good kilometres. However, the gear-set wasn’t the only thing that made cruising this, muscle bike, a pleasure. Since the Bontrager carbon seat-mast was Ride Tuned, the bike felt natural and part of you, even when having spent a good deal of time on it. The handlebars also didn’t strain our hands, but instead were wide enough to hit the dropper bars and cruise. 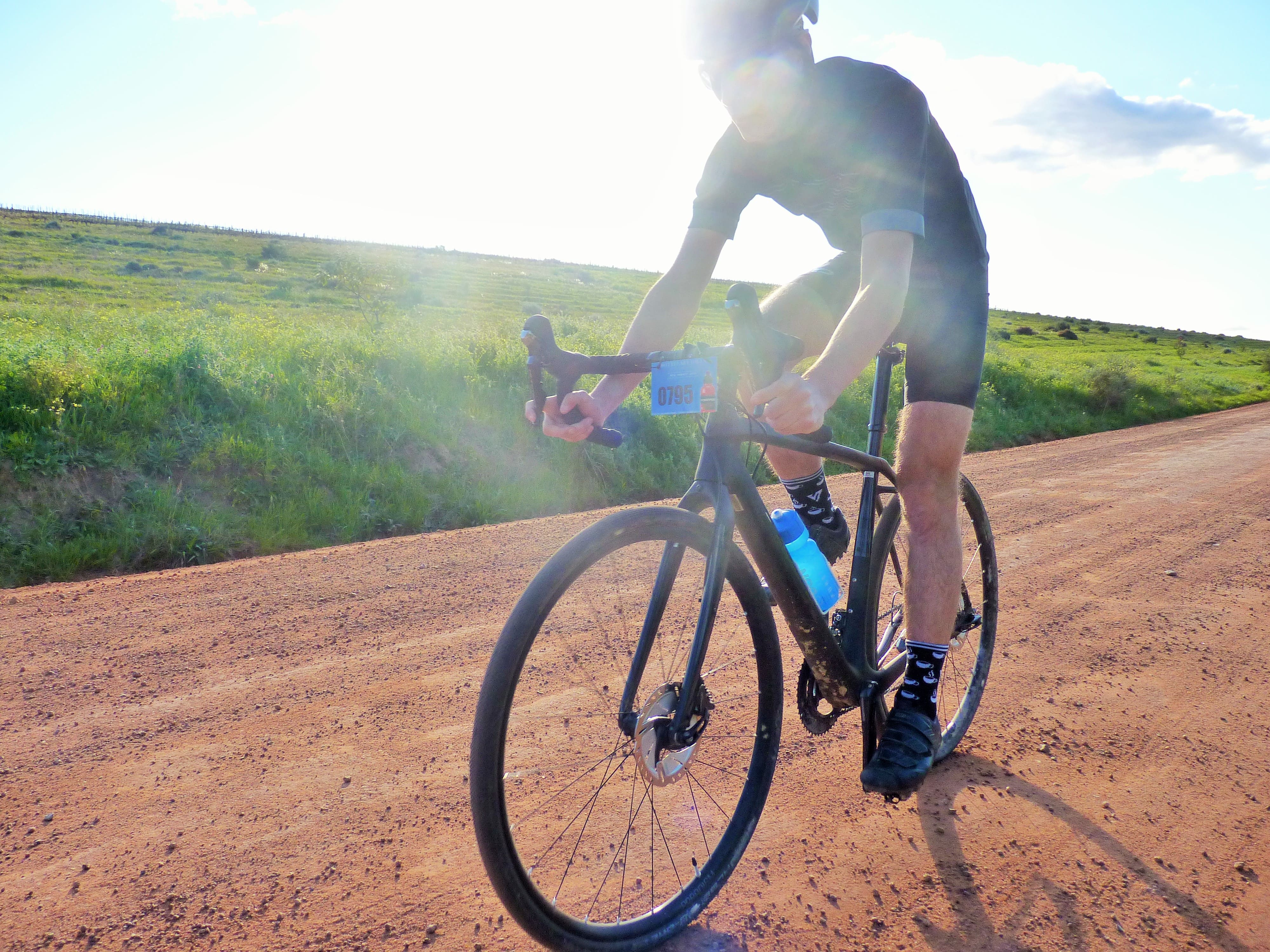 We verified the Trek Checkpoint’s versatility, by riding it on both MTB pledged single-track, and the unforgiving tarmac. Obviously, on the MTB track you can’t ride too fast, for fear of simply being rocked and shaken of the bike. That’s one thing we might add to the bike, a front shock, but then again that depends on the type of riding you’re going to be doing. And Trek have already compensated for this with their IsoSpeed decoupler, which adds compliance to the bike over bumpy stuff. 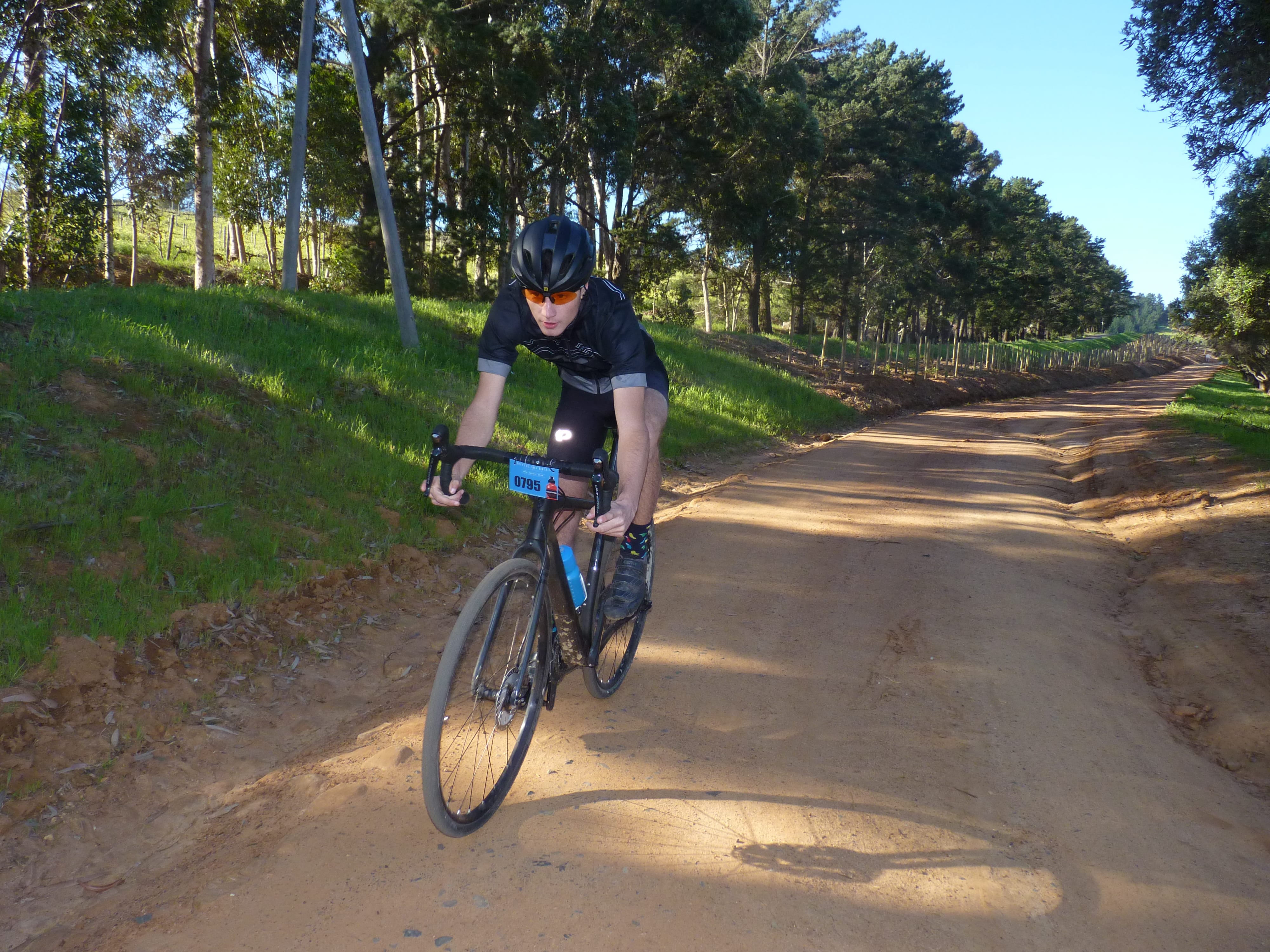 On the tarmac, the Checkpoint was confident and fast. If we did hit a pothole or two, the bike wasn’t thrown off its line. Probably because of the width of the tyres, and more stable build. But still I’d like to see a road bike handle like that someday. Then, if we needed to slow down, the hydraulic disc brakes were always at our disposal. In fact, we believe every gravel-bike should have this type of disc brake. It just eliminates so much strain off your hands. 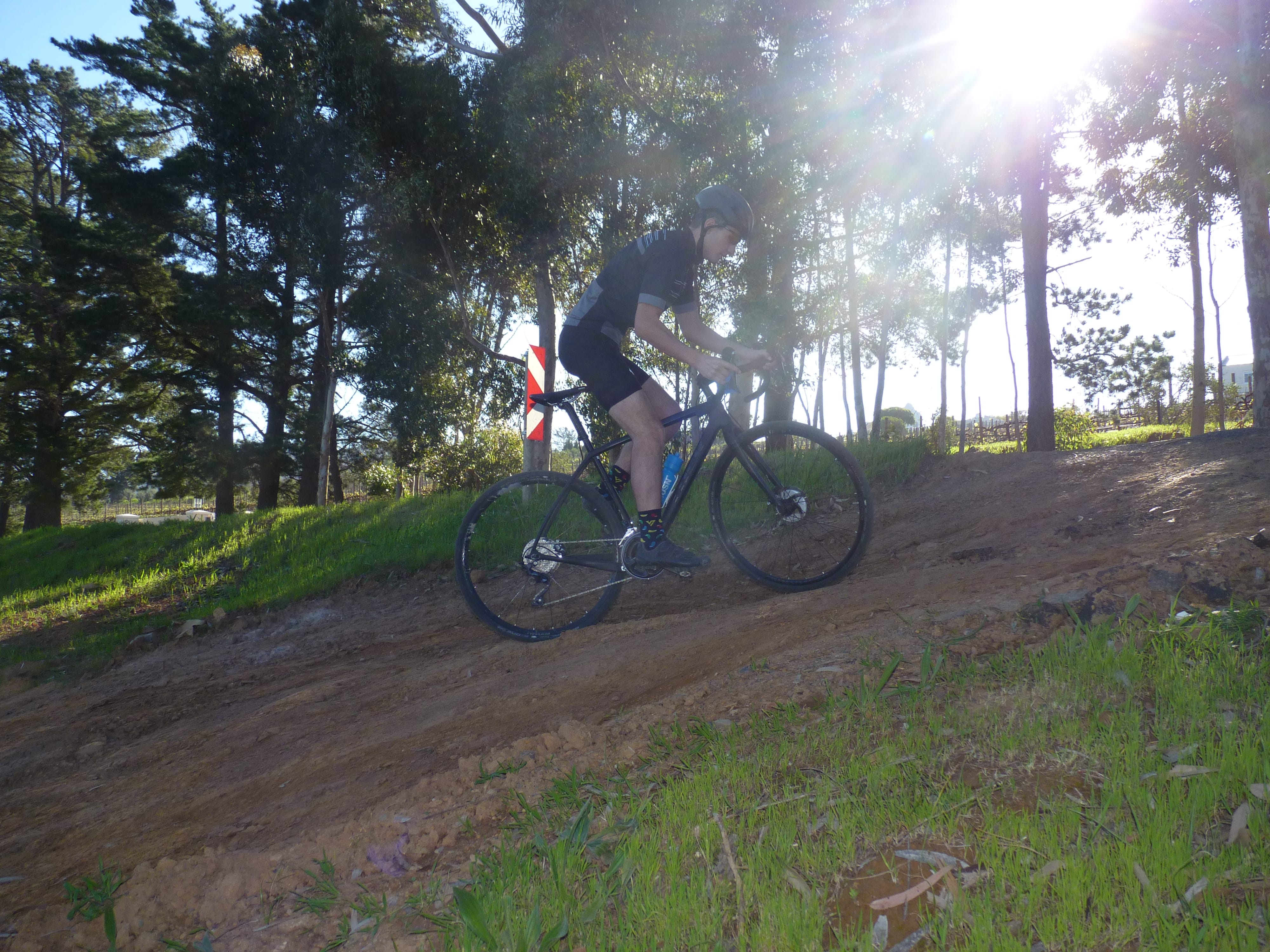 Trek aren’t afraid to push the limits of engineering bikes that are fun to ride. They’ve shown this characteristic immensely on the Checkpoint gravel bike series. For the Checkpoint SL6, we’re positively impressed! It projected great technology, and superb ride quality. It’s truly the most muscular, gravel bike of its kind.