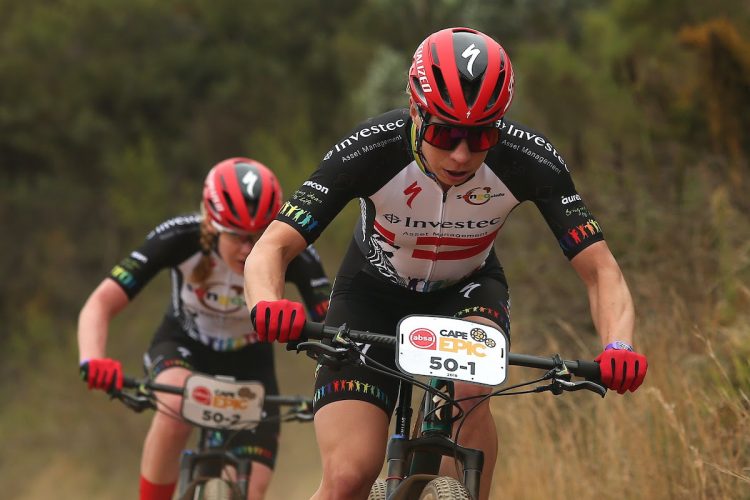 It was a day for the World Champions on the opening Prologue of the Absa Cape Epic on the slopes of Table Mountain on Sunday with Annika Langvad and Anna van der Breggen dominating the Women’s category while Nino Schurter and Lars Forster took control of the elite men’s race.

The Swiss pairing of multiple World and Olympic Champion Schurter and his new partner Forster (Scott-SRAM MTB Racing) opened up a 41-second lead over German Manuel Fumic and Henrique Avancini (Cannondale Factory Racing) on the 20km Prologue which started and finished at UCT on Sunday. Sergio Mantecon Gutierrez and Ondřej Cink (Kross-Spur) were third, 53 seconds behind the leaders.


“The course suited us quite well,” said 32-year-old World Cross Country Champion Schurter who is racing with Swiss compatriot and race debutant, Lars Forster. “We are cross country racers and this is our strength, so we are happy with the win.

“We want to win the whole race,” he added, “so hopefully everything goes according to plan for the next seven days.”

In the women’s race, four-time Absa Cape Epic Women’s category winner Langvad and current World and Olympic Road Champion Van der Breggen (Investec-songo-Specialized) were in a class of their own as they powered around the course to build a lead of over two and a half minutes over Switzerland’s Ariane Lüthi and Poland’s Maja Wloszczowska (Kross-Spur Racing).

The Investec-songo-Specialized pair removed any doubt they are going to be the team to beat this week as they finished the 20km stage in a time of 51 minutes and 44 seconds, placing them 43rd overall. Summit Fin’s Candice Lill and Adelheid Morath are third, 14 seconds further back.

“Getting a good start is always very important,” said Langvad after the finish. “It is good for the morale and good for the motivation. I think that was the hardest and fastest Prologue I have ever done at the Absa Cape Epic.”

“I had a bit of a lapse of concentration out there,” said Matt Beers afterward. “We were going super hard and I hit a rock. It was close to home so we decided to just nurse it home for the final two kays.”

There was also some drama in the Absa African Women’s Jersey with dormakaba Ladies team of Sam Sanders and Amy McDougall claiming the stage win over Land Rover Jaguars pairing of Hannele Steyn and Katja Steenkamp.Sanders and McDougall will take a 33-second lead into Stage 1 on Monday after the Galileo Risk team of Theresa Ralph and Sarah Hill were penalised 30 minutes for drafting.

The early leaders in the race for the Exxaro Jersey are Lucky Mlangeni and Tshepo Tlou (Exxaro/PWC) and they hold a slender 28-second lead over Luyanda Thobigunya and Baphelele Mbobo (BMT Fairtree) with Kagiso Tlou and Patrick Rengane (Exxaro / RMB) third.

While Sunday’s 20km stage on the slopes of Table Mountain National Park was a test of speed and climbing strength, Monday’s Stage 1 will be place more emphasis on endurance with the 111km ride including 2 700m of climbing.