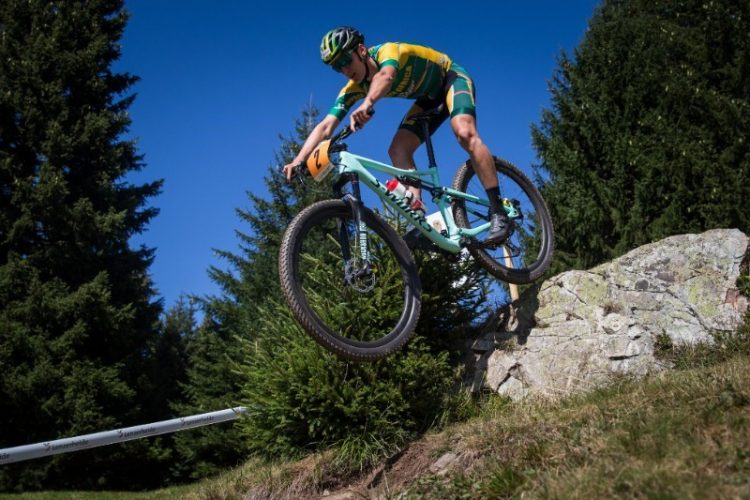 The UCI World Championships is the biggest race for any rider – an opportunity to earn the coveted rainbow jersey and bragging rights as World Champ for a full year. Team Spur’s Alan Hatherly takes aim at the U23 World title on Friday afternoon on a natural course, littered with roots and slick wood sections, in Lenzerheide, Switzerland. And mountain bike fans can follow the bar-to-bar action live!

Last year Alan raced to second at the UCI XCO World Championships in Cairns, Australia in a thrilling battle with New Zealander Sam Gaze that went all the way to the line. Gaze moved into the Elite age group in 2018 while Alan gets a final shot at the U23 rainbow jersey. He carries plenty of confidence into Friday’s race, having finished fifth overall in this year’s U23 World Cup series and claiming a victory in Round 6 at Mont Sainte-Anne in Canada.

But the South African is no shoo-in for victory at the high altitude race venue in Lenzerheide. The U23 category is fiercely competitive. Norwegian powerhouse Petter Fagerhaug, Swiss whiz Filippo Colombo and Frenchman Joshua Dubau represent the biggest challengers to Alan’s dominance. But the U23 ranks run deep with talent and skill and attacks will come from any number of the highly-motivated youngsters. Alan’s training partner, Danish superstar Simon Andreassen, as well as rising star Christopher Blevins from the US will be fighting fit and won’t back down.

The U23 men race at 16:30 local time (the same in South Africa) on Friday afternoon, and there will be live streaming on the UCI Youtube channel. Team Spur will also be covering the race from its twitter page. The live video streaming is a welcome development, and an opportunity for fans to see the ferocious pace and silky skills of the world’s most talented young mountain bikers. Team Spur fans have been reduced to following Alan’s exploits across the globe in 2018 via the team’s live twitter feed updates, as U23 World Cup races aren’t broadcast live.

Alan starts the race on the front row with the number two board, as the highest ranked U23 rider. “The start at Lenzerheide is crucial, you have only a hundred metres or so on the straight before we turn left onto an open tar road climb,” Hatherly says. “Once you’re on the tar climb it’s near impossible to pass riders, and diving straight into a tricky singletrack section afterwards makes tactics even more important.”

Rain is forecast for race week and in course practice riders are already battling to stay upright on sections of the slippery track. Alan has raced a few wet World Cup events this year with mixed results, but a solid understanding of how to approach a race when the weather turns against him. “It’s all about being stable on the bike and controlling the slides which will inevitably come,” Alan says.

Alan spent the past week in Livigno, Italy, preparing for high-altitude racing on the big stage on Friday. “The altitude will also play a factor and I need to be smart about keeping my efforts constant, any overreaching and you’ll pay the price.”

It is a proud day for Alan and Team Spur, who are ambassadors to the wildly successful Spur Schools Mountain Bike League back home in South Africa. Alan himself is a product of the Spur League and Team South Africa will be represented today (Thursday, 6 September) by no fewer than five Juniour riders chasing glory. Spur League riders Tiffany Keep and Zandri Strydom are the Junior women hopefuls, while Daniel van der Walt, Jamie Penfold and Keagan Bontekoning will line up in the green and gold national kit for their first World Championships event.