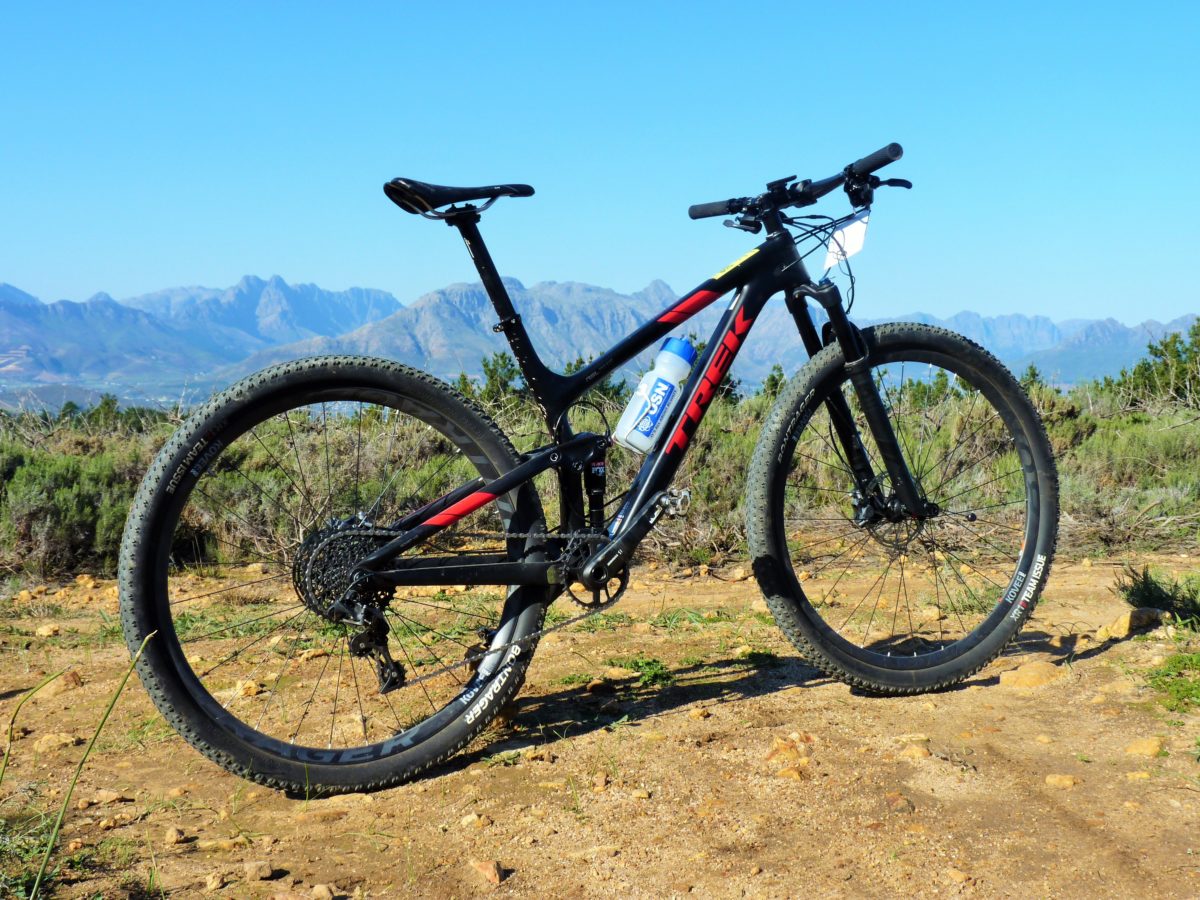 The Trek Top Fuel 9.8 brought velocity to life, by showing-off it’s pure-bread XC/Marathon charm! Without a second thought, the bike immediately got down to business during our test. Exhibiting its originality, through the way it read the terrain.

The Top Fuel 9.8 is a perfect race bike model from Trek, since it takes absolutely no nonsense on South African soil. Its fast, its efficient, and takes one’s perspective of cross-country racing to a whole new level!

The Top Fuel 9.8 OCLV carbon frame had me talking all the way during the test. Its lightweight construction kept my energy levels high on climbs, as I expended less energy dragging the bike, and more energy pushing it to its limits. Trek also made sure that their high performance carbon stayed protected by adding their Carbon Armour along the chain stay and on the down-tube. This also ensures that the frame’s, dicey, aesthetics stay looking good for longer.

While the frame was fully race orientated, it also presented some functional and efficient features. Firstly, the Boost148 technology and G2 geometry gave us the freedom to run wider tyres on the 29er wheels using a larger chain ring, without compromising on pedalling efficiency. Secondly, Trek’s Anti-Brake Pivot system played nicely with the braking system, through adding traction on the wheels. Thirdly, the Top Fuel’s Full Float rear triangle enhanced the 100mm of shock travel and made it feel like 140mm! Going over large drops, were certainly not a problem here!

In addition to Trek’s super lightweight frame, FOX got on-board the Top Fuel train with their Performance 32 Float, Step Cast fork. On the first ride I came to the realisation that things were going to get seriously wild with speed. 100mm of travel kept me speeding up through bumpy sections and not losing momentum. If you ask me, the FOX 32 Float SC shock series was a faultless match-up with Trek. Definitely a shock that understood the needs of a XC racer, just like the frame.

Offset is the new…

My personal favourite in design; Bontrager’s Kovee Pro wheels. Made from OCLV Carbon, Tubeless Ready, and set with the purpose of making the Top Fuel more stable. What made these wheels so special? Engineered offset spoke bed. Basically, the spoke doesn’t meet the rim in dead centre. Instead, the meeting point has been moved a few millimetres; in doing so, Trek are able to reduce wheel dish. Other advantages that we noticed, was the stiffness off the wheel area, that awarded me with great confidence, through stability.

When RE;aktiv took the floor:

Trek’s RE;aktiv suspension technology never ceased to amaze me. Partnering with FOX’s Performance Float; the rear suspension always acted as it was supposed to. Secure on ascends, open and plush on descends.

What Trek and FOX both understood about XC/Marathon racers, is that they’re usually so focused on winning, and therefore need a bike that takes care of itself. That being said, Trek included a FOX remote lockout system for both shocks. The only draw-back, is that I was forced to adjust both shocks at the same time using one lever, instead of individually. However, I believe Trek used this system to save weight on the Top Fuel 9.8. Perhaps they’ll bring out a separate remote lock-out system for each shock, at a later stage.

All-in-all, RE;aktiv took care of what was important. That being efficient enough to transfer solid amounts of energy through my pedal stroke, while still operating sensitively to knocks from the ground.

Components that bring the competition:

The Trek Top Fuel 9.8 was so fast, my mates, almost never caught a glimpse of me on it – living up to its legendary name! Exclusive speed was on the cards, simply because of the low down frame geometry; that kept me ploughing energy into my legs. Therefore, inspiring me to go faster and faster!

Digging deeper into the geometry; the head-tube angle was a prominent 70-degrees, while the seat-tube angle tended towards a slacker type of 68.5-degrees. Both angles, allowed for a riding position that was centred, and that promoted quick reflexes over the handlebars.

Trek based the Top Fuel’s geometry and design, on the fact that being stable, means you can faster. The unique contribution of Bontrager’s Kovee Pro offset rims, aimed for a frame that was completely in line with the wheels. The benefits are entirely noticeable; better climbing being the most prominent. I could shift my body’s centre of mass, as I needed to get traction on the back wheel, without a squabble.

The marathon characteristic of the Top Fuel 9.8, revealed itself through the bike’s weight on downhills. I felt energetic, when I swung the bike through corners. This was truly a revelation of the bike’s ability to save energy through its light-weight, by allowing my arms to rest. I could simply let the bike flow, and not have to dig in deep to steer.

When those steep technical sections of the track came into sight, we had the energy to push on. This was where the frame’s ability to get me balanced and its aspect of good handling, overlapped. I felt confident to manoeuvre the Top Fuel in-between rocks and roots, and since the geometry encouraged fast pedalling, I was able to power across those technicalities.

The Top Fuel 9.8’s capability to keep my energy levels up, throughout the race track, makes the bike my personal favourite and prime choice for any XC/Marathon race. Plus, it’s really good at making you enjoy dicing your friends uphill!