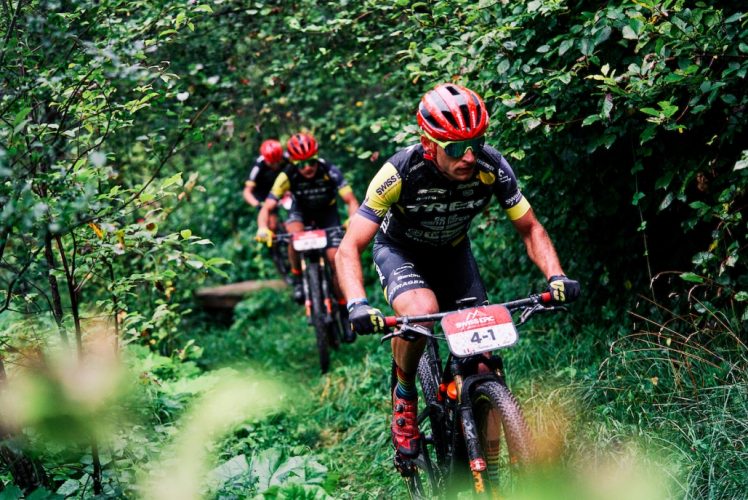 On Saturday, 24 August, the 2019 Swiss Epic concluded with Trek Selle San Marco A wrapping up the overall title, while Devonbosch Stellenbosch took the stage honours. Michele Casagrande and Fabian Rabensteiner were content to roll across the final finish line, in Davos, 3 minutes down on the stage winners, secure in the knowledge that they had done enough to be crowned champions. Ahead of them Frans Claes and Sören Nissen turned around a disappointing week with a victory on the Grande Finale.

The 64-kilometre-long Stage 5 traversed the Zügenweg and summited the Äbirugg on the trails from Lenzerheide to Davos. Stage 1’s wet weather long-forgotten, the sun came out to ensure the riders had a pleasant last day in the Swiss Alps of the Graubünden Canton. It was no easy stage however; the route included a sapping 2 300 metres of climbing.

As the stage started with a lap of the Lenzerheide Heidsee before following a flowing singletrack towards the Landwasser Viaduct, there was little opportunity for attacks. Once the climbing began, after the 25-kilometre mark, it was the Superior XC Team/bischibikes.ch of Martin Gluth and Simon Vitzthum who made the first move. The pair quickly established a 25 second lead, but a wrong turn relegated them to the second group.

Superior XC Team/bischibikes.ch’s misfortune was Devonbosch Stellenbosch’s gain. Claes and Nissen took up the impetus as they split the field on the day’s longest climb. Initially Trek Selle San Marco’s Casagrande, Rabensteiner, Samuele Porro and Damiano Ferraro followed the Belgian/Luxembourgian combination. Realising that Claes and Nissen were over an hour down on the overall classification the decision was made to let them slip away.

“We had no need to take risks today” Rabensteiner recounted, once the Swiss Epic title was secure. “On the final downhill we slowed a bit and came to the finish with both teams together, and without risks. It was fantastic to cross the line with the other team [Trek Selle San Marco: Porro and Ferraro] today. It was such a nice race and it feels great to have won” the, newly crowned, Swiss Epic champion said.

While Trek Selle San Marco took no risks Devonbosch Stellenbosch went all out for the stage victory. Nissen arrived at the finish line sporting a torn jersey and a bloodied arm from a crash on the final descent. “Some people get IRONMAN or Absa Cape Epic tattoos” he joked. “I thought I’d get something to remember the Swiss Epic by so now I have a nice cut from a fall on one of the slippery roots.” His crash did not detract from his joy at securing stage victory. “The week started okay with us in the top five for two stages, but then we had a terrible day on Stage 3. We punctured, broke a chain and panicked. We lost so much time that we decided to take it easy yesterday to save ourselves for today” the Luxembourg cross-country champion stated. “I said yesterday already, we would be going for the stage win today,” his partner, Claes added.

Claes and Nissen’s winning time was 2 hours, 54 minutes and 5.8 seconds. They were followed across the line by Casey South and Noah Blöchlinger, of jb BRUNEX/Fischer BMC, 1 minute and 24.3 seconds later. The stage podium was wrapped up by Centurion Vaude’s Daniel Geismayr and Vinzent Dorn. Given that all the teams contesting the top five places on the general classification started the final 9-kilometre descent to Davos together, it was unsurprising that Stage 5 saw no shift in the overall standings. Trek Selle San Marco A’s accumulated time of 16 hours and 6 seconds was enough to hand them victory by 6 minutes and 37.9 seconds over the jb BRUNEX/Fischer BMC team. Texpa Simplon’s Michael Stünzi and Marc Stutzmann were third overall, with Centurion Vaude fourth and the other Trek Selle San Marco team fifth.