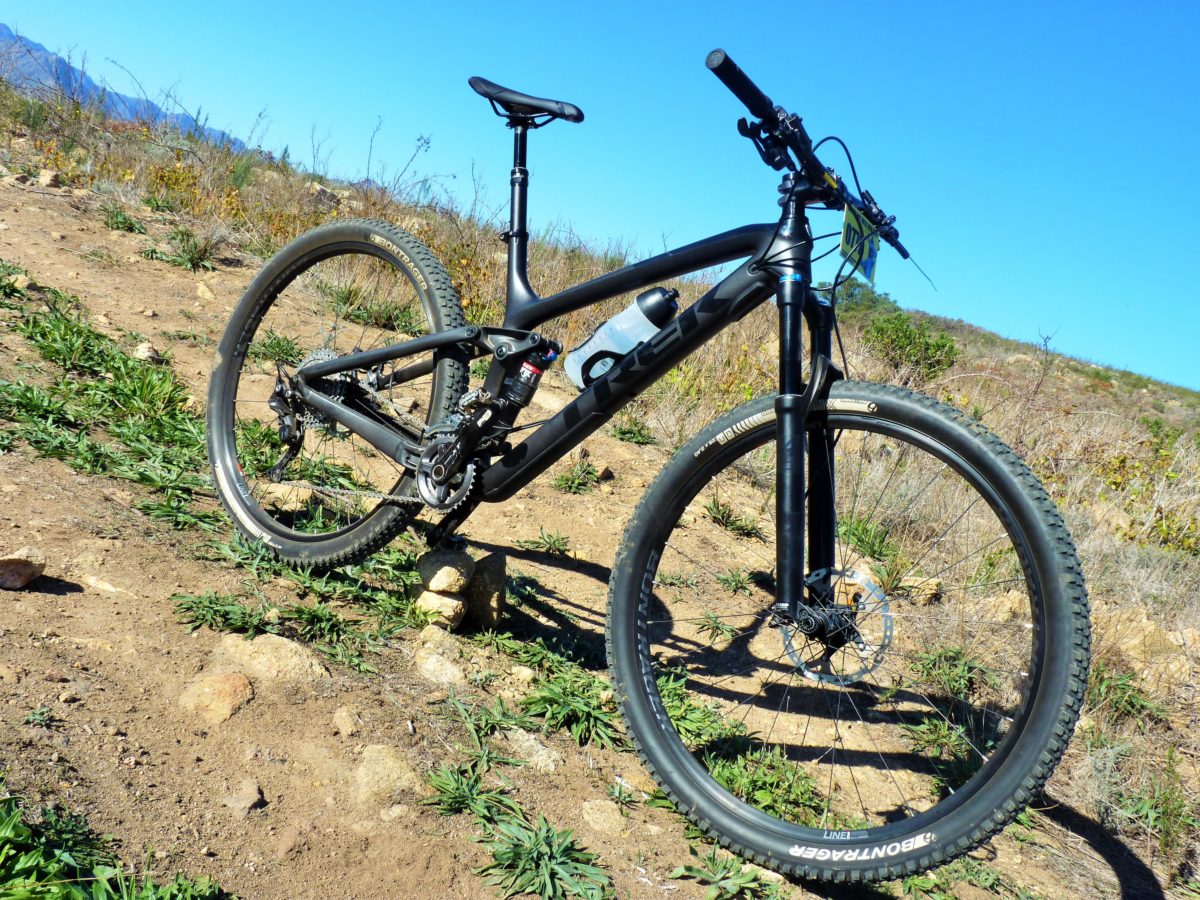 The Trek Fuel EX 9.8 was the lightning before the thunder! Unleashing unrelenting storms on the trail, with the very definition of energetic at its centre!

Need I mention the downhills? Breaking speed limits is certainly in the Fuel EX 9.8 nature. I can personally give Trek a huge thumbs-up, as they’ve created a bike that is self-confident on the trail, with a dancing nerve for downhills. It was simply a test I won’t forget.

Trek’s technological advances applied on the Fuel EX 9.8 are knock-out zones for competing brands. I took a long look at Trek’s OCLV carbon fibre bike frame that makes up the EX 9.8. First things first, its built to last. With a shape that’s designed to enhance frame stiffness, there was a sense-of robustness about the frame. Then the light-weight factor, played host on up-hills, and the affect was most gentile on my legs. So, I had stiffness for maximum transfer of energy, and the light weight for a feathery feel.

The speciality of Trek’s OCLV carbon doesn’t stop there though! Trek have made their carbon fibre with what they call ‘Carbon Armour’. This innovation reduces the effect on the material, when sharp objects find their way smashing into the frame. For instance, if a stone was shot-up from the front wheel, and hit the down-tube of the frame; the carbon would be less likely to chip or crack in that area, because it spreads out the impact of the force over a larger surface area of the frame.

Secondly, I was beyond impressed with Trek’s RE:aktiv suspension system. FOX together with Trek took care of the shock absorption, with FOX’s Performance Float and Trek’s RE:aktiv damper technology at the centre. The whole hype about RE:aktiv suspension is the way it only acts when it needs to. Its firm under pedalling efforts, but smooth and instantaneous over rocky terrain. FOX also have their Extra Volume air sleeve equipped to the Float, which made the shock absorption, more potent.

I definitely enjoyed the RE:aktiv suspension system. In fact, so much so, that I’ll class it as one of the best suspensions that I’ve ever had the privilege of experiencing! Its reliable, soft when you need it to be, hard when you need it to be, and made the ride that much more enjoyable.  Fine-tuned by Trek and easily adjustable with 3 damper settings; it was a system that adapted to my riding style. I think that’s everything a rider will ever want from a shock!

Third on our innovation list, is Trek’s Anti Braking Pivot system. From my experience, usually when I hit the brakes, the suspension would lock causing the shock to not perform the way it needs to when braking over bumps. However, when testing this feature on the EX 9.8, the ABP system kept the shock absorbing to the max, even under brake pressure. This I can only think is a result of Trek’s floating pivot swing-arm. All-in-all the ABP system bettered shock performance, and made sure I could perform my best out on the trail.

Trek’s Fuel EX 9.8 frame stands-out with G2 Geometry, that’s more trail orientated. Plus, it makes room for the 130mm rear shock, which in my opinion, is not that essential. The suspension is pretty plush regardless of the travel.

FOX was upfront on the fork with their Performance 34 Float, making sure that the obstacles didn’t say bump with too much enthusiasm! Then, the damper was especially to my liking, since it was easy to adjust with FOX’s Grip 3 damping technology, and also featuring 130mm travel.

My personal favourite innovation; Bontrager’s Line Comp 30-wheel set. Why was it my favourite? Well, the spokes are attached to the rim with a slight offset from the direct centre of the rim. Forming a sort of elliptical rim shape. This offset, brings forth the advantage of wheels that are almost perfectly aligned with the frame. Seriously, this is the future of rim design, as it is with-out doubt an innovation that makes you feel more in control over your bike, and supplying confidence to the rider.

Next, I had Shimano’s trail seeking Deore XT 2X11 drivetrain, which had an absolutely, indispensable gear ratio. Up-hills were put to shame! Shimano also handled the forceful-type brakes with their XT Deore model callipers and levers.

Lastly, I had some nimble carbon handle-bars and stem, slotting in under Bontrager’s Line Pro model series. Another excellent, light-weight component was the Evoke 3 saddle, that did have some sticky padding (that I soon got over), but was definitely suitable for trail riding, with the amount of padding.

The fun started on the downhills, when I was persuaded to give-in to the EX 9.8’s aggressive behaviour. While I was slightly nervous on the first ride, I quickly grew accustom to Trek’s implanted predictive handling, that made me wish downhills were longer, just to turn the bike on corners. When I encountered technical parts of the trail, like drops that you had to get your front wheel in the air for, the Fuel’s efficiency didn’t stop. The flow continued, and, my stoke was constantly fuelled! The tail was also easy to swing in mid-air, just for fun!

Single-track, I did pick-up a slight difficulty in the manoeuvrability of the bike. However, I concluded this could be because of a longer frame geometry. On the other side of that coin though, the Fuel EX 9.8 appealed to me as a balanced bike, and this is a good result of the longer geometry.

Just because the Fuel EX 9.8 was gunning for the downhills, doesn’t mean it ran away from the up hills! The bike performed better than expected on ascends, with pure stability over the terrain I set it on. Having light-weight components, immediately saved energy on my legs, thus, giving me the freedom to climb efficiently. I was also impressed with the way the EX 9.8 sprinted in pursuit of speed. It seems as though I could have done anything with the bike and still have had a positive experience.

Looking at the geometry of the Fuel EX 9.8; having a head tube-angle of 67.7 and seat tube angle of 66.2 degrees makes the bike feel relaxed, yet hasty in some aspects. However, the geometry as a whole was suited for the type of riding that most trail riders pursue. Fast and fun, with confidence for days!

Trek’s Fuel EX 9.8, was likable from the moment I swung my leg over the saddle. Because of the amount of travel on the suspension and geometry of the frame, the bike falls between an XC market field, and trail specific field. A brilliant target for South Africa. With outstanding technology features, this bike is definitely worth every penny!