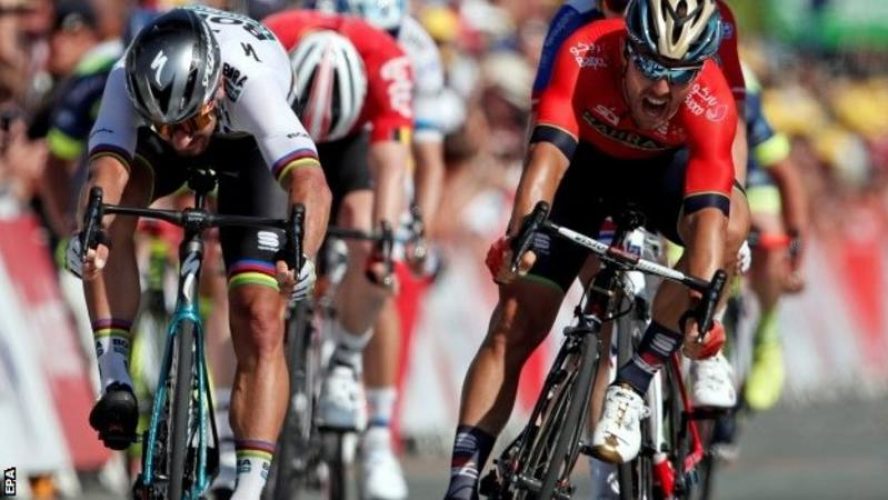 The Slovak surged past French hope Arnaud Demare on the slight incline to the finish and held off the fast-finishing Italian Sonny Colbrelli.

Sagan takes the yellow jersey from stage-one winner Fernando Gaviria, who was unable to contest the sprint after being held up by a late crash.

Defending champion Chris Froome avoided the pile-up to finish in the peloton.

After his crash on stage one, Froome will be happy to get through stage two unscathed and his Team Sky team-mates worked hard in the closing kilometres to keep him up near the front of the race and out of danger.

His team-mate Geraint Thomas is the highest-placed British rider, in seventh, 15 seconds adrift of Sagan. Thomas, who says he is being given a freer role by Team Sky in the opening week, could find himself in the yellow jersey after Monday’s third stage, which is a 35.5km team time trial.

He said: “We’re communicating well and riding well – the guys are doing well for me and Froome.

“We’ll try to get the stage win first in the team time trial and then if we do end up in yellow that would be a nice bonus.”

Four-time winner Froome is one minute seven seconds down on Sagan, as are rivals Richie Porte and Adam Yates, who crashed again on stage two but was able to recover quickly.

They remain 51 seconds down on the other main contenders Romain Bardet, Tom Dumoulin, Mikel Landa, Vincenzo Nibali and Rigoberto Uran.

British sprinter Mark Cavendish was caught behind the late crash, ensuring the Dimension Data rider was again unable to contest the finale.

Bora-Hansgrohe rider Sagan provided yet another reminder of his supreme all-round talents in securing his ninth Tour de France stage victory after a 182.5km race to La Roche-sur-Yon in the Vendee.

The 2018 Paris-Roubaix winner showed great positional sense and bike-handling to ensure he was not caught up in the crash on a right-hand bend inside the final two kilometres before kicking clear of his rivals on the uphill drag to the finish.

He also claimed 17 points for second place at the intermediate sprint, behind solo breakaway rider Sylvain Chavanel, to establish a 26-point lead over Gaviria in the green jersey points classification.

With Sagan also able to contest stages over hilly terrain, it is already looking very difficult for any rider to deny him a record-equalling sixth green jersey, tying the mark of former German sprinter Erik Zabel.

“I have to say a big thanks to all my team-mates because they were at the front for the last 30km – in the end I expected something easier but it was really tough,” said Sagan.

However, he added that he would be in yellow “just for one day” as he expects to lose the race lead in Monday’s team time trial.

Before the race came back together with around 14km of the stage remaining, French veteran Chavanel had spent nearly 140km out front by himself after early breakaway partners Michael Gogl and Dion Smith, who claimed the polka dot climbers jersey, dropped back following the day’s sole climb.

The 39-year-old, who rides for Vendee-based Direct Energie, is competing in a record 18th Tour de France and was given a rapturous reception throughout his solo effort.

Monday’s stage three is a 35.5km team time trial circuit around Cholet, with the time for each team taken from the fourth rider across the line.

In his stage-by-stage guide for BBC Sport, Mark Cavendish said: “It’s open roads and it’s relatively straightforward but that means horse power is needed. My Dimension Data team will be trying to save energy for upcoming stages. We know we’re not really in with a chance of winning but we’ll give it our best shot.”