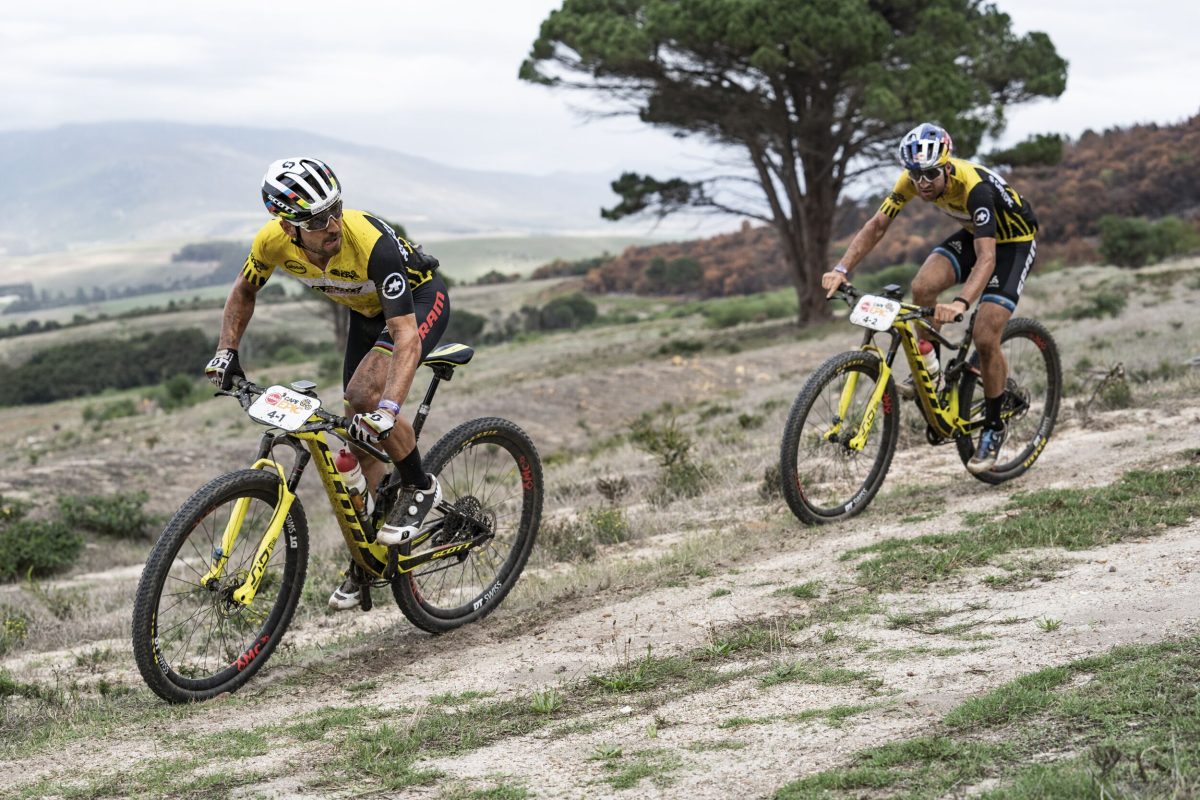 World Champions, Continental and National Champions, and the reigning Olympic Gold Medalist. 8 previous winners, sharing a total of 19 titles between them. Those are the barest facts of the 2020 Absa Cape Epic’s Men’s category. Digging deeper, there are 18 nationalities represented, from far afield as Colombia and New Zealand.

What every mountain biking fan wants to know, though, is… who could win the 17th edition of The Race That Measures All?

The five-star favourites are undoubtedly the defending champions, Nino Schurter and Lars Forster. SCOTT-SRAM MTB-Racing was 2019’s most dominant team, having broken Cannondale Factory Racing’s hopes of victory on the Queen Stage. Since Schurter’s win last year, a young star in the form of Mathieu van der Poel is taking the world by storm and threatening the Swiss Legend’s mountain biking supremacy. Expect the reigning Olympic Champion to kick off the year firing as he looks to build towards defending the Gold he won in Rio. His partner, Forster, won his first World Cup race in 2019 and will be a year stronger and wiser in 2020. All signs are thus ominous for Schurter and Forster’s rivals.

In 2019, SCOTT-SRAM MTB-Racing’s primary rivals were Manuel Fumic and Henrique Avancini. The Cannondale Factory Racing duo was the only team to manage to put Schurter and Forster on the back foot, last time out. To win the race that has eluded them thus far, despite spending days in yellow on each of the last three editions, they will need other teams to help put pressure on SCOTT-SRAM MTB-Racing. That said, Fumic believes he is in better shape now than this time last year and Avancini appears to be as powerful as ever. Who has the edge between Fumic and Forster could well be the deciding factor.

Any hopes of upsetting SCOTT-SRAM MTB-Racing could come down to the role played by Trek-Pirelli in the 2020 race. Samuele Porro and Damiano Ferraro, of Trek-Pirelli 1, were 3rd in 2019. While Fabian Rabensteiner and Michele Casagrande, of Trek-Pirelli 2, won the Swiss Epic – the Absa Cape Epic’s sister event in Switzerland’s Graubünden canton. If Fumic and Avancini are four-point-five star favourites, the Italian quartet share four-star favourites status.

As do Jaroslav Kulhavý and Howard Grotts. The Ninety One – Songo – Specialized team is back after Grotts missed their title defence in 2019. How the pair will perform remains open to debate, but it would be foolish to write any team with the Czech Express in it off. Especially as they will be supported by Christoph Sauser and Wessel Botha, as well as the exciting Ninety One Specialized Trinity team of Tom Pidcock and Florian Vogel. Pidcock starts the Absa Cape Epic off the back of second position, behind non-other than Schurter’s nemesis Van Der Poel, in the Cyclocross World Championships in February.

Team BULLS also have too much Absa Cape Epic experience to be discounted. Urs Huber and Simon Stiebjahn head to the University of Cape Town off the back of a general classification victory at the four-day Tankwa Trek stage race. Perhaps more importantly for the squad as a whole, Martin Frey and Simon Schneller were invaluable to the BULLS Heroes’ victory. The German outfit also has the sage wisdom of Karl Platt and Alban Lakata to call upon.

Two more dark horse teams, who could be in the mix for a podium position are the Wilier 7C CBZ outfits. Johnny Cattaneo and Luis Meija represent the most likely top general classification finishers from the squad. Wilier 7C CBZ 2’s Ole Hem and Marco Rebagliati are unknown forces in Absa Cape Epic terms but have the support of the first team’s experience to count on.

The Absa Cape Epic once again boasts a strong Spanish contingent, with Alberto Losada and Roberto Bou Martin, of ProtourBCN/Tbelles-BMC, having the honour of being the highest-ranked riders from the Iberian Peninsula. They are joined in the Men’s category by Orbea Factory’s Ibon Zugasti and Gotzon Martín. As well as by the Orbea Factory Andbank team of Joaquim Rodriguez – yes, that Joaquim Rodriguez, one of the 2019 Dimension Data Master’s category champions – and Oliver Aviles Gilabert.

Rui Nunes, of Eat Sleep Ride Repeat, and his fellow Portuguese partner Andre Filipe will be looking to defend national honour in the battle of the Iberians. While Thomas Steinthal and Gustav Frederik Dahl, of the Danish CPG Cyber Security Innovation team, have no Swedes to tussle with, they will have to settle for broader European rivals; in the shape of CSU Scott ProCycling’s Romanian duo, Tudor Oprea and Logigan Lucian.

EF Education First’s Alexander Howes and Lachlan Morton could perhaps be the most eagerly followed team in the race. Though a top twenty position would surely represent a decent return for the WorldTour road racers. ONYA Bike New Zealand’s Tim Rush and Michael Vink would likewise also be happy with a similar general classification place after 8 days of Untamed racing.

BUFF Scott MTB is another name that fans will be excited to see on the start list. Although in 2020, the line-up looks different to that of past run-ins with the Absa Cape Epic. BUFF Scott MTB 1 sees Enrique Morcillo Vergara, who finished 6th in 2019 alongside Francesc Guerra Carretero, team up with Konny Looser; between the two riders, there are 8 Absa Cape Epic finishes. BUFF Scott MTB 2 is represented by Miguel Muñoz Moreno and Jose Maria Sanchez Ruiz.

A few more international teams still hover over the final confirmation of their Absa Cape Epic participation. Some are top ten contenders and one contains a previous race winner…

Those details will be revealed in time. What is already known is the South African line-ups. The first local to be name-checked is Shaun-Nick Bester. The DarkHorse Wheels rider is not partnering with a fellow South African in 2020 however, leaving him ineligible for the Absa African Men’s jersey competition. He has rather chosen to race with Canada’s Alexandre Vialle.

The competition for the red jersey is sure to be fiercer than ever. The favourites for the competition are the PYGA Euro Steel team of Philip Buys and Matthys Beukes. Beukes has effectively dominated the competition in the past and will be targeting a top 5 overall, which historically would virtually guarantee him and Buys the Burry Stander Memorial Trophy. PYGA Euro Steel 1 will have the support of Phillimon Sebona and Pieter du Toit in their Absa Cape Epic bid. They will, however, have to hold off NAD Pro MTB’s Nico Bell and Matt Beers. Along with the ever-improving Imbuko Giant pair of Marco Joubert and Nicol Carstens. DSV Pro Cycling’s Gert Heyns and Arno du Toit should also not be discounted from the race for red.

First Move Sport’s Jaco Venter and Jacques Janse van Rensburg have struggled slightly on their return to mountain biking thus far. The former Team Dimension Data riders have been blighted by punctures in both the Attakwas Extreme and Tankwa Trek. Punctures are not insurmountable issues though and both have shown they have the power to be in contention, as the general classification shakes up. They will, however, have to outperform the aforementioned local teams, as well as Alan Gordon and Keagan Bontekoning, of Insect Science Pro, and the dormakaba team of Michael Posthumus and Derrin Smith. Along with the last-minute combination of Timothy Hammond and Matthew Stamatis.

Hammond and Stamatis will represent the race’s official tracking partner, SPOT, as SPOT Africa. They serve as a reminder that every team in the race – from the overall leaders to the lanterne rouge – can all be tracked via the Absa Cape Epic website or the Epic Series App.