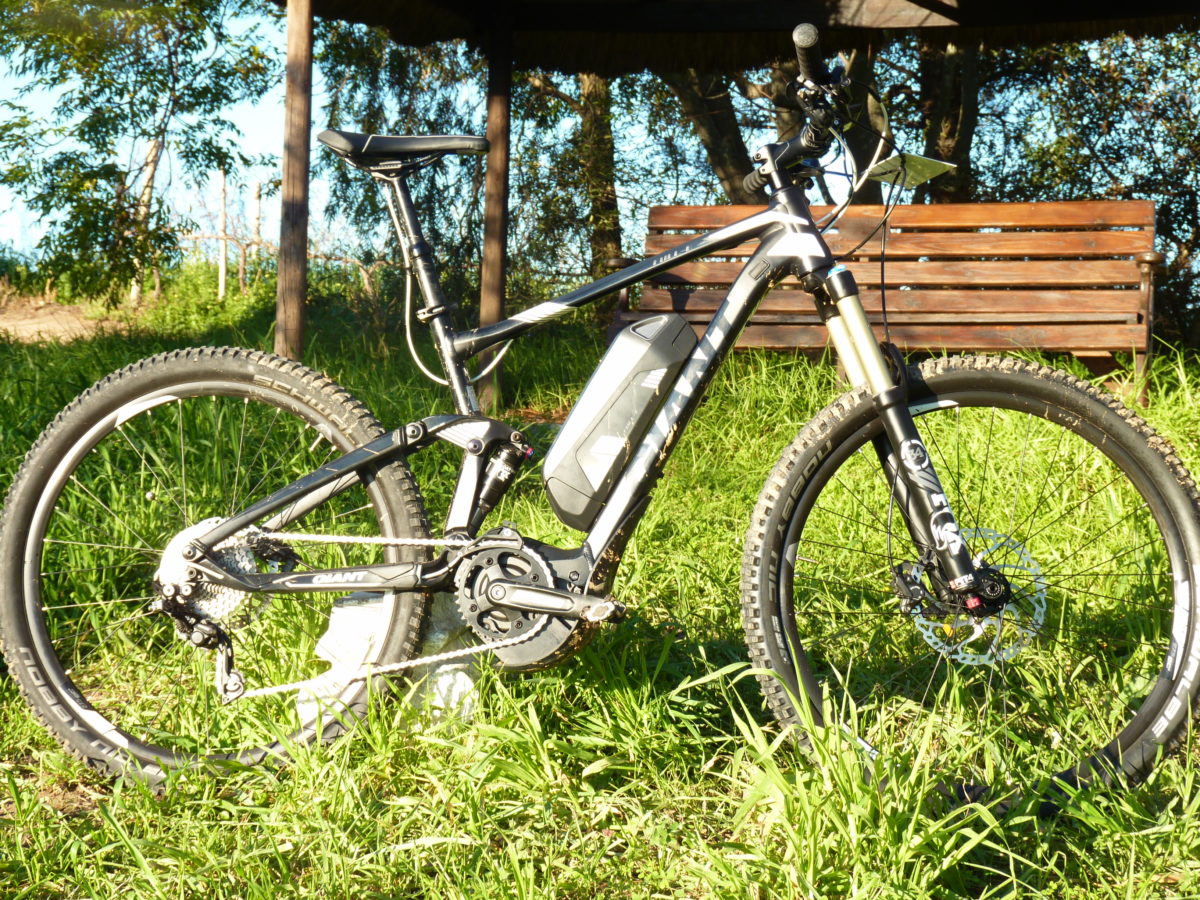 E-bikes have taken the world by surprise; growing in popularity in Europe and now making its way down to South Africa. In all honesty they’ve surprised us in their design, battery life and capability. They exhibit extreme power on off-road terrain, and I think that is what people undermine.

Some of the biggest cycling brands have already launched their E-Bikes for off-road terrain. Some of which, like the Specialized Turbo Levo, are the Giant   Full-E+1’ s biggest rival. Don’t underestimate the Giant though; it’s got some pretty mean tech…

Giant have definitely not compromised on the frame weight; using Giant’s FluidFormed ALUXX SL Alloy to construct the frame. The frame is a bit heavier than a normal bicycle’s frame, due to the lower tube of the frame being a little more solid, in order to be able to hold the big battery. With Giant’s Smart Link to the suspension, you can feel that they’ve maintained their reputation of delivering good quality suspension geometry.

Instead of having the motor built-in to the bottom-bracket of the frame, Giant opted to have it simply bolted on, therefore the frame in that area is built around the motor and is wider than your average bottom-bracket. This “open” design for the motor allows it to be easily accessed for servicing.

The suspension suits the Full-E+1 perfectly. Making sure that you never run out of travel on the fork is the FOX 34 Performance with FiT4 damper technology and offers you 3 different shock settings for full control over the 140mm fork. In the rear you’ve got a FOX Float Performance DPS that also offers 3 settings of adjustability and brings minimal weight to the party.

For the drivetrain you’ve got a 1×10 setup, with Shimano Deore shifters and XT Shadow Plus rear derailleur. Simplicity was key when Giant put the drivetrain together.

With 21kg of total bike weight you can build up a lot of momentum down-hill, so to slow this steed down, Giant put a 200mm disc on the front hub of the wheel for the callipers to grip, giving you more stopping power.

The motor is probably one of the best in the world. It is powered by Giant’s EnergyPak 500 battery which takes about 3-4 hours for a full charge and will last for 4-5 hours of non-stop riding.

The motor itself is Giant’s SyncDrive C that produces 80Nm of powerful torque. It is a 250W motor that cuts-out at 25km/h. Giant Pedal-Plus 4-Sensor technology pick-up the speed of the rotation of the cranks and communicate this with the motor. The motor then automatically adjusts the torque according to your pedalling speed. That’s pretty hi-tech if you ask me!

What makes this motor so nice and luxurious is the fact that you can actually control the torque of the motor through setting it in a certain mode. You do this by using buttons on your handlebars that are linked to Giant’s RideControl LCD monitor. The monitor is there to tell you what mode the motor is in, the remaining battery life, and then of-course your speed and distance.

The motor has 3 different modes; Eco mode, Normal mode, and Sport mode. These are simply settings for the torque of the motor. Obviously, if put into Sport mode; the motor is going to assist you more with more power on the pedal assist, however it does use more battery power. Normal mode is the mode you want to be in. It still gives you enough torque to conquer small hills, while still being conservative on the battery life. Eco mode is purely there to conserve battery life.

When you first sit on the bike, you notice that the saddle is quite comfortable, and your body position is very upright. Plus, with Giant’s Contact dropper seat post things are extra convenient.

On ascents the bike handles pretty easy and is nice and stable, despite the heavy motor. It’s also easy to pedal because of the assistance provided by the motor. As soon as you switch to Sport mode on the motor, you just get this burst of power coming from that 80Nm of torque, accelerating you up the hill with speed.

You might think to yourself that the Full-E+1 is not that manoeuvrable on descents. Well you’d be correct. Especially on single-track; the bike does present some good momentum, but when it comes to those tricky sections the bike does feel hefty to steer.

On some occasional flat terrain, we’d often encounter short sections that were difficult to pedal through. However, as soon as we started to struggle through those sections the motor would immediately kick-in with the pedal assist and power us through.

While testing the E-bike on the trail, we offered two other cyclists the chance to ride the Full-E+1. They described their pedalling on the bike as “wrong”. They told us the reason for it feeling “wrong”, was because they were putting so little effort in pedalling, yet they were zooting up a hill at 25km/h!

In all honesty, they said they were astounded by what this E-bike could do, and if they had to choose between a motor-bike or E-bike, they’d probably choose an E-bike.

The Giant Full-E+1 is best described as an explorer. You can literally go places that no vehicle can take you. It is able to go further than a normal bicycle at less energy cost on your side. This bike is perfect for South African terrain and conditions, built for rough roads, rocks and with a heart of adventure.

The starting price for the Giant Full-E range is about R75000. It is cheaper than the Specialized Levo though! At the moment, we were told that this is the only Giant Full-E+1 bike in South Africa. (the one we tested) Giant are probably just sussing out the market here first. So I’d suggest getting in-touch with your local Giant dealership and having a chat to them about purchasing the Giant Full-E.