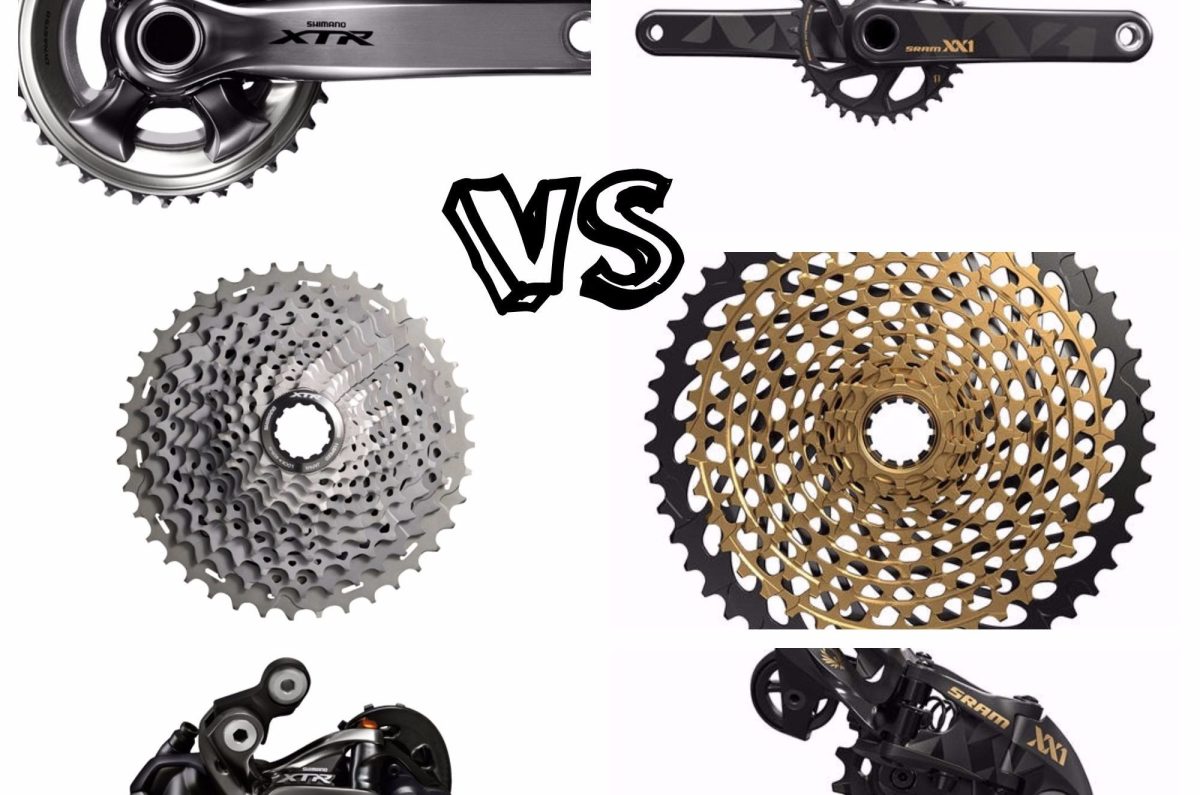 The Shimano XTR Di2 and SRAM XX1 Eagle drivetrains are debatably some of the best in the world; and it’s not just because riders like Nino Schurter and Julien Absalon win most of their races on them. It’s also because Shimano and SRAM each spend a considerable amount of time, developing new technology, testing it for hours, and then develop it some more, to create only the best.

Buyers these days are now faced with the question: “Well which is better?” That’s the purpose of this Tech Wars article; to answer that question.

Now, you might be thinking that these drivetrains are not in the same league right!? I mean you’ve got Shimano pressing on the buttons of Electronic Shifting and then you have SRAM breaking through in 1×12 gear sets. How can these drivetrains possibly be rivals?

Well, as soon as you launch a product, you give buyers another item to watch on their variety list. Therefore, these drivetrains are competing products. They’re also competing in races, World Cup series’, and in the field of technology.  We’re going to deliver you a verdict of which is better, by looking at these three aspects of the two most remarkable drivetrains ever!

The first thing that comes to mind when you think of the Shimano XTR Di2 drivetrain, is the Electronic Shifting. Which in fact is a first in the ever evolving cycling industry. The benefits are quite apparent with E-Shifting. Firstly, no sticky cables, gives way to effective and responsive shifting. Secondly, you shift the shifter with an effortless motion, helping you to save even the smallest amount of energy on your ride.

However, this E-Shifting advantage, comes at a cost. That cost would be, weight and battery life. Obviously, with battery life there’s a limit to how much your bike can be convenient. For instance, you can’t just take the bike and go for a ride, you’ve first make sure the batteries are charged etc… Then again, that’s a minor sacrifice. Weight however, is not such a minor sacrifice! If you ask any bike racer, they’ll tell you that weight can be the difference between 1st place or 2nd place. Now, inevitably because of batteries and other vital components, the XTR Di2 drivetrain will be heavier than the XX1 Eagle.

Judging the pros and cons of the Shimano XTR Di2 drivetrain is hopeless game, but one thing is certain, that you’ll get a really good experience out of the Di2 system. With its computer controlled front derailleur, and Shimano Synchronized shifting system, you can spend less time worrying about your gear system and more time enjoying it!

Then, our personal favourite, the electronic display. You can see the screen in daylight and moonlight, and displays information about your drivetrain’s status.

Onto the more hard-ware type of the drivetrain, Shimano designed the XTR group-set to have a 40T-11T cassette, with an extremely accurate and aggressive XTR rear derailleur. Not only is the derailleur brilliant at what it does, but it keeps the chain stable and accurate, for a precision drivetrain type. Plus, the weight of the rear derailleur comes in at a feathery 289-292 grams, depending on your product.

The XTR HOLLOWTECH II Race crank-set (1×11-Speed), is at the forefront of crank design. Featuring lightweight, and steady material, you can rest assured that won’t lose energy in your pedal strokes.

SRAM launched the Eagle at the beginning of 2016 and it had huge success in UCI races, which lead to its debut soon after. The aspect of this drivetrain, that makes it perfect for racing, is its light-weight design in every component.

Looking at the crank-set, SRAM made the XX1 crank-arm with a carbon composite material. Which is brilliant, because not only is this material light, but its strong at transferring energy. This crank-arm matches perfectly with the XX1 chain-ring, that’s been trimmed down to the bare minimum, without compromising strength or durability. The crank-arm is also quite versatile making provision for a 30T chain ring, which comes as an added benefit in a 1×12 set-up.

The XX1 Eagle rear derailleur is just as impressive! Made from pure aluminium and carbon, with titanium bolts, the mechanism is as strong as it is feathery light. Now, the technology built into this derailleur is what makes it stand out from the rest. Firstly, the no bounce or chain slip Roller Bearing Clutch, keeps your chain precise on high speed and over bumps. Secondly, the X-SYNC tall square teeth edges engage the chain earlier than traditional triangle shaped teeth, which enables maximum grip and mud-clearing recesses. All-in-all the derailleur keeps your chain going with precision.

The chain also has technology of its own to consider. For example, the Flow Link chain coating, which in fact does an important job keeping the friction down on the chain links itself. With a 1X12 gear set-up, there is a lot more tension on the chain than normal, so SRAM compensated for that, and simply made their Eagle chain stronger, yet flexible in the same manner.

SRAM was the first company to introduce 1X12 gear-sets to the cycling industry. So far they’ve been a hit, and its thanks to SRAM’s revolutionary technology that’s built into the components. The SRAM XX1 Eagle leads this revolution thus far.

Looking at the success of the SRAM XX1 Eagle, you’ll immediately see that it finished first at the 2016 Rio Olympics aboard Nino Shurter’s Scott Spark RC 900, and even more recently on the winning bike of the 2017 ABSA Cape Epic. So, if that doesn’t tell you SRAM have done something right, then I don’t know what will!

Now looking at the success of Shimano’s XTR Di2 drivetrain, you see it winning the 2014 UCI XCO Cup aboard a BMC belonging to none other than Julien Absalon. With some more successful races from endurance and trail riders.

Through this entire article, we’ve been looking at the technology of the two best drivetrains in the world, and as promised, we are going to give you a final conclusion of which is better.

With that conclusion, we will name the SRAM XX1 Eagle Drivetrain the winner of this Tech Wars article! However, in the same breath, we would like to say that we expect the XX1 Eagle to be better in an XCO environment, and then the Shimano XTR Di2 to be better in perhaps more of a trail discipline.

Thanks for reading, and stay tuned for more articles like this one!