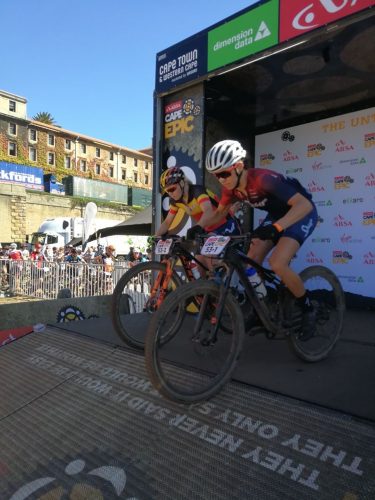 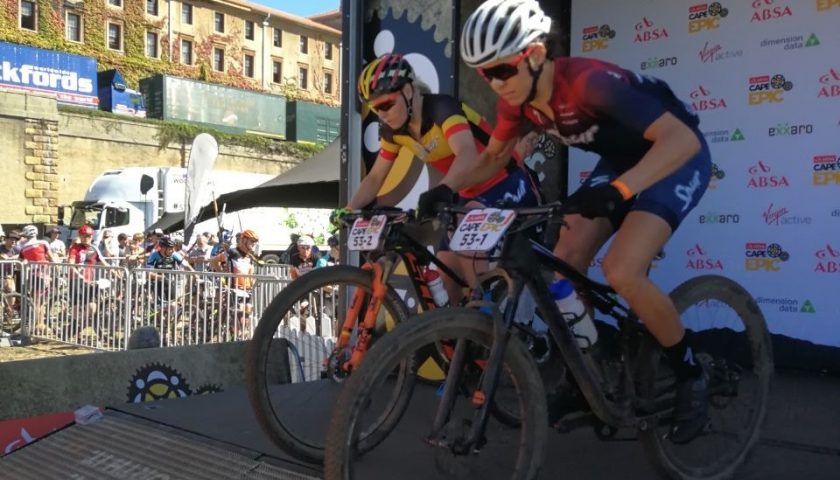 Ariane Lüthi and Githa Michiels opened their Absa Cape Epic campaign on Sunday on a high note, finishing second behind Investec-Songo-Specialized (Annika Langvad and Kate Courtney). The Prologue on Table Mountain over 20km with 600m of climbing was never a target stage. And, in fact it is often said that the Epic cannot be won in the prologue but it can well be lost.

Ariane and Githa rode out of their skins however to finish only a minute behind Langvad and Courtney, something which pleased both of them immensely and sets them up wonderfully for the week ahead.

“Our goal was to be consistent, smooth and safe, and being second is just where we want to be,” Ariane commented after the finish. “We’re so, so happy to be on the podium,” she said. “To beat Annika and Kate in such a short race is really difficult, so we’re really happy with second.”

“You know, one minute over an hour of racing is a lot,” Ariane said. “But, over the eight days that we’re going into it is not a lot at all and anything can happen.”

According to Ariane the prologue is always a very nervous affair and completely different from the long marathon stages of the rest of the week. “Here every second counts and you have to go into time trial mode. The road time trail at Tour of Good Hope really helped me a lot,” she said. “It’s really about getting that tunnel vision, but at the same time not forgetting about your partner. The mindset of every second counts and you have to sprint flat out.

What makes the pair’s performance that much more special, is the fact that it was the first time Githa had ever raced with a partner and, for Ariane, it is a racing style way out of her marathon comfort zone.

“This kind of racing is a gear up from what I normally do so to keep up with the XC racers, and with Githa – who did an amazing job today – is always very tough.”

Githa echoed Ariane’s sentiments on the win, adding how they had a plan and stuck to it. “I think we rode just about perfectly to the plan,” she said.