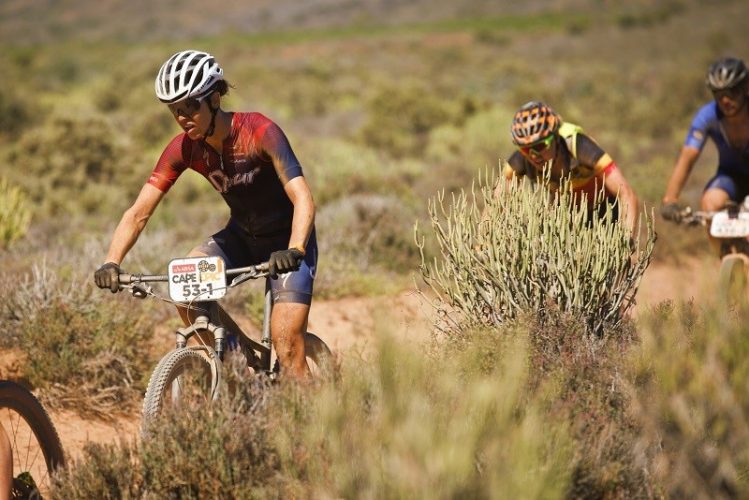 If Monday’s Stage One was all about settling into the pace of the long marathon stages after Sunday’s prologue, Stage Two was destined to be a day in which the top teams would look to consolidate their GC positions. Team Spur’s Ariane Lüthi and Githa Michiels did just that, with a spectacular sprint finish seeing them take second place, their third on the trot.

The stage was another brutal ‘Epic’ day featuring 106km around Robertson with 2000m of climbing. While on paper it may have looked similar to stage one, it was in fact rather different with far less open district roads and many punchy ups-and-downs. This made for riveting racing.

The women’s field stuck together for a long time before the attacks started coming. “We didn’t have a set strategy going into the stage,” a visibly exhausted Ariane explained after the finish. “On some of the rougher sections early on I tried to apply some pressure to see if something might stick – to see if Kate and Annika might make a mistake – but we just couldn’t get away,” she said.

“Then, when Kate and Annika went, it was a proper effort, Githa could almost go with them, but I was unable to.”

Once the Investec-Songo-Specialized outfit were off the front (with around 30kms to go), Ariane and Githa spent the remaining kays sparring with Mariske Strauss and Annie Last.

Into the significant bumps of the last 25kms, the Silverback-KMC pair put the hammer down and tried to get away from Ariane and Githa. “I was really suffering,” Githa said afterward. “I felt good all day, but through the last 30 kays I had to dig deep to keep up.”

Githa, who just two weeks ago was still shivering through a Belgian winter, added how the heat was taking its toll. “I didn’t have the prep that as everyone else did in terms of the heat, so it was tough,” she said.

So tough, that up one of the final climbs into the finish Githa started dropping back. Ariane stayed with Annie and Mariske, saying afterward that she just knew Githa would get back on.

“She is an animal! Just so strong, plus I was on my limit and knew I would’t have been able to bring her back.”

The four came into the finish together and Githa made the most of her cross-country racing skills and, in a sublime effort after the push to reattach, she and Ariane managed to squeeze a second place in the sprint.

Ariane could not praise her partner enough. “What a huge sprint after that effort,” she said. “I’m super proud of her and I don’t think she quite knows just how suited she is to this type of racing. I’m really happy to have her on my team!”

While the gap has grown between the top three pairs, it is all to play for and there is still a long week ahead. Tomorrow is the longest day into Worcester. Here’s what is in store:

Stage 3 is the first transition stage as riders depart Robertson for the 122km,1800m stage to Worcester