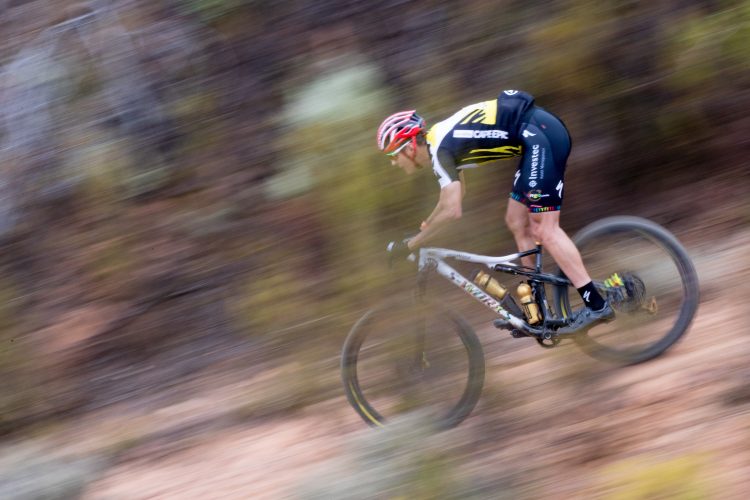 Howard Grotts was down to start the 2019 race with three-time Absa Cape Epic winner Jaroslav Kulhavý, for Investec-Songo-Specialized. Along with Cannondale Factory Racing and SCOTT-SRAM, the partnership of Grotts and Kulhavý was among a trifecta of big favourites for the UCI Men’s category. Grotts’ withdrawal means that fellow Specialized Racing teammate Samuel Gaze steps up from the Specialized Foundation-Spur Schools League team to partner the Czech Express, Kulhavý

The shuffling of cards within the Specialized deck has resulted in a team, popular with South African mountain biking fans, forming. NAD Pro’s Matthew Beers has filled Gaze’s slot alongside Alan Hatherly and the pair will now race under the banner of the Specialized Foundation-NAD. The CTCT MTB Challenge, on the 2ndof March, provided Beers and Hatherly with the final proof their sponsors needed to convince them that the young friends were on equally impressive form.

Lill Lines Up The Wins

Candice Lill also used the CTCT MTB Challenge as a final confidence builder ahead of the Absa Cape Epic. The Summit Fin rider overcame Mariske Strauss and the defending champion, Stenerhag to claim a hard-fought win. The result comes on the back of victory for Lill in the Imbuko Big Five MTB Challenge on the 23rdof February.

On the same weekend as the Imbuko Big Five MTB Challenge took place in Wellington the first UCI HC (Hors Classe/Beyond Classification) mountain biking event of the season, the Cyprus Sunshine Cup was on the go on the Mediterranean island.

The attention in Cyprus was on Anna van der Breggen’s performance, where she was second – by just 1 minute – to her teammate Annika Langvad. A 1 minute time gap may not appear that small, after four stages, but ominously for the Investec-Songo-Specialized pairing’s rivals in the Absa Cape Epic the gap between first and third was a massive 7 minutes and 30 seconds.. In securing first and second they defeated Sina Frei, Lisa Pasteiner, Linda Indergand, Anne Terpstra, Barbara Benko, Isla Short and Yana Belomoina.

The highest placed of the Absa Cape Epic racing men was Ondřej Cink, in eighth, who is set to start for Kross Racing alongside Sergio Mantecón Gutiérrez on the 17thof March.

Back in South Africa the Knysna Bull, made personal by Constantia, saw highly competitive men’s and women’s fields racing for a, winner-takes-all, R100 000 prize. In the women’s race dormakaba’s Samantha Sanders defeated Stenerhag and her partner Amy McDougall. Sanders looks to be in the form of her career, but the concern for the dormakaba team will be the lingering effects of McDougall’s chest infection. Sabine Spitz, who it was confirmed on the 1stof March will be racing with fellow German Nadine Rieder at the Absa Cape Epic, was fifth after major punctures on Stages 2 and 3. The 2008 Olympic Gold Medallist had led the race after the Prologue and Stage 1, so she will be hoping that her bad luck is now out of the way ahead of the main goal of her season.
The men’s race at the Knysna Bull, made personal by Constantia, was won by Beers; just 17 seconds ahead of Hatherly. The result proved that the pair are exceptionally equally matched right now and adds credence to the thought that they could be a dark horse team for the Absa Cape Epic title if anything should befall their designated leaders, Kulhavý and Gaze. In third after a Prologue and three marathon stages was HB Kruger, who will be lining up alongside Frans Claes for Pro Devonbosch Qhubeka in the Absa Cape Epic. Kruger won two stages, but a crash on Stage 1 cost him vital time, which effectively scuppered his chances of overall victory. The trio of South Africans saw off the challenge of international star Nicola Rohrbach at the Knysna Bull, made personal by Constantia.

The final major race on the exceptionally busy weekend of the 23rdof February was the 2019 Sabie Classic. The Lowveld ultra-marathon forms part of the UCI XCM series and as such attracted international riders like Yannick Lincoln and Antonin Marecaille along with a strong South African field. Matthys Beukes continued his one day race winning streak, which started with the Momentum Health Attakwas Extreme, presented by Biogen, in January. Beukes held off PYGA Euro Steel teammate Philip Buys to take the win, while NAD Pro MTB’s Nico Bell rounded out the podium.
The NAD Pro team announced just days before Grotts’ withdrawal that due to health reasons Wessel Botha, who helped Beers to the 2018 FNB Wines2Whales title, would be stepping into Bell’s spot in the team’s Absa Cape Epic line-up. With Beers moving out to join Hatherly, Botha now needs a teammate. Bell is said to be optimistic of being able to race with the youngster, if his heath allows it. While the fourth member of the NAD Pro squad and former South African XCM Champion, Gawie Combrinck, is also an option to partner Botha.

UCI S1 Action in the Med

At the premier field of mountain biking talent assembled thus far in the 2019 season gathered in the Koue Bokkeveld region of South Africa for the Momentum Health Tankwa Trek, presented by Biogen. On the start line were Manuel Fumic, Henrique Avancini, Karl Platt, Alban Lakata, Urs Huber, Simon Stiebjahn, Tristan de Lange and Simon Andreassen; along with others like Buys, Beukes, Hatherly, Gaze, Beers, Bell, Combrinck, Botha, Joubert, Carsetens, Geismayr, Käess and Dorn. The key point which emerged over the four days of racing was that Avancini in particular is flying and that Cannondale Factory Racing in general are going to be very hard to beat at the Absa Cape Epic. The Brazilian was a class apart while his partner Fumic never succumbed to the pressure the formidable collection of rivals tried to exert upon him.

The other Absa Cape Epic riders who emerged from the gruelling Momentum Health Tankwa Trek, presented by Biogen, with form credit in the bank – despite the results not reflecting their performance levels were Huber and Stiebjahn. After struggling in the forty degree heat on the opening stage, which started at 15:00, the pair gave Avancini and Fumic their biggest battle of the race. They could in fact have come close to winning the race, had they not taken a wrong turn – while in the lead on the Queen Stage. Their Bulls teammates, Lakata and Platt, did more to disguise their form ahead of the Absa Cape Epic at the Momentum Health Tankwa Trek, presented by Biogen. Both are wily campaigners however and could be saving themselves for a big performance in the coming weeks.

While the lead never changed hands in the UCI men’s race at the Momentum Health Tankwa Trek, presented by Biogen, the women’s race saw the pink jerseys change hands on the Queen Stage. Strauss and Stenerhag stormed into the race lead with a dominant performance on the Merino Monster climb, which left Lill and Strauss’ old Absa Cape Epic partner Annie Last unable to follow. The early race leaders, Tepstra and Benko, of Ghost Factory Racing won the opening two stages of the race; but struggled with punctures on their hardtails as the event wore on. With Benko spending an increasing amount of time in South Africa and the pair’s global popularity the hope remains that they will represent Ghost Factory Racing in the 2020 Absa Cape Epic.

Prudently Avoiding Some of the Big Guns

The final race, to a ruler ran over the results, is the Prudential PE2Plett. The four day stage race was won by Kruger and Claes by a shade under 5 minutes over Gert Heyns and Arno du Toit. Heyns, is teaming up with European XCO Champion Lars Forster, to race in support of SCOTT SRAM’s Nino Schurter and Andri Frischknecht at the Absa Cape Epic. While Du Toit’s DSV Pro partner for the eight days of the Absa Cape Epic, Julian Jessop, finished fourth alongside SPOT Africa’s Timothy Hammond.

The great mystery in terms of race shape ahead of the 2019 Absa Cape Epic is provided by the SCOTT-SRAM riders, Schurter, Frischknecht and Forster. After training camps in Arizona and Stellenbosch there is no reason to question the World Champion’s preparation, Schurter will almost certainly be amongst the strongest riders in the Absa Cape Epic. His partner Frischknecht does not have the luxury of Schurter’s exceptional palmarès and years of experience however. Since taking silver at the Swiss cyclo-cross championships in January Frischknecht has not pinned a racing number to his jersey. Could that be an error from the meticulously prepared SCOTT-SRAM team? Only time will tell.