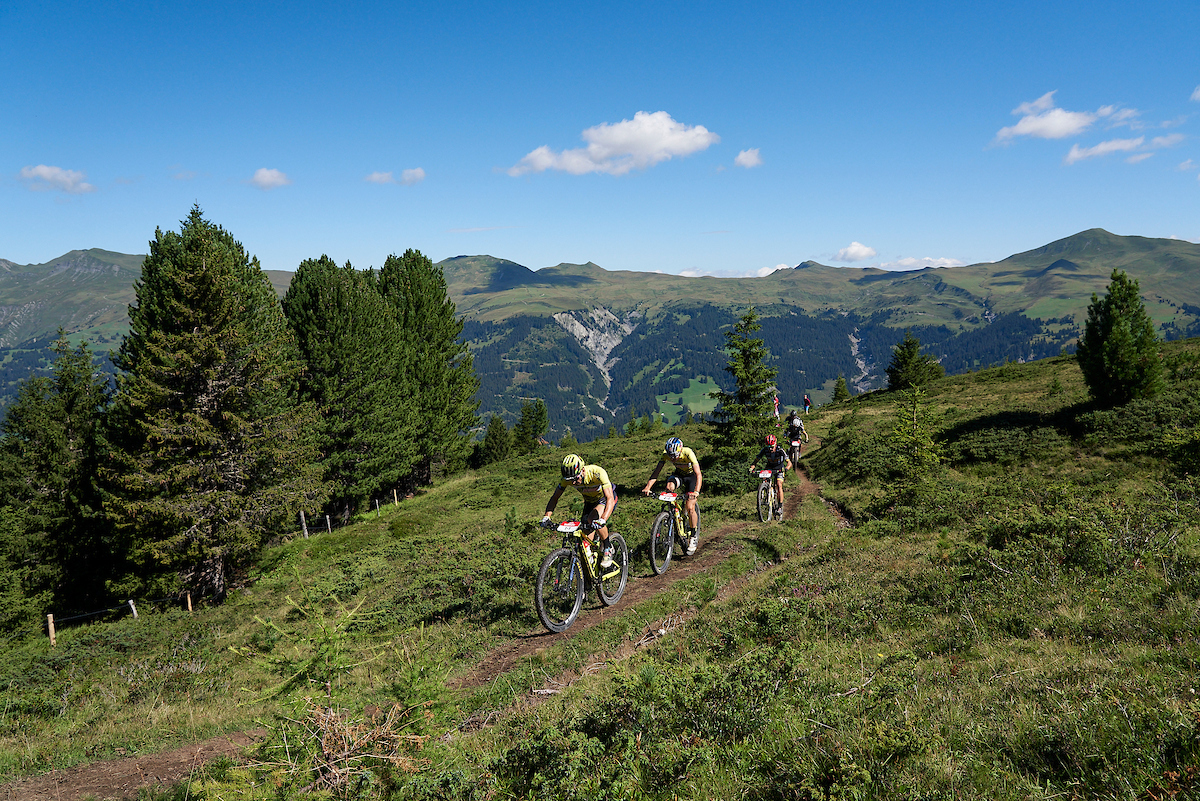 The Hörnli Trail was among the many highlights of Stage 3 of the 2020 Swiss Epic. In a day packed with downhill singletracks, around Arosa, it was unsurprising that SCOTT-SRAM’s Nino Schurter and Lars Forster emerged victorious.

Graubünden is famed, in the summer months, for its alpine cattle and vast dual-use trail network. On Stage 3 of the 2020 Swiss Epic, mountain bikers were treated to some of the best singletracks the canton has to offer, including the Hörnli Trail. True to form, and pre-stage expectations, SCOTT-SRAM excelled on a route seemingly tailor-made for their strengths. Nino Schurter and Lars Forster raced to their second stage victory, in so doing extending their overall lead to nearly 6 minutes.

Schurter and Forster’s skills put their rivals on the back foot. For Centurion Vaude’s Ben Zwiehoff, this pressure led to an untimely and race-ending crash. Having set the pace on the opening climb; which led the field from Arosa to the Hörnli Ski Station, at 2 400 metres above sea level, Zwiehoff crashed in the first downhill singletrack of the day. The German rider struck his knee badly in the fall and, despite battling on for a few more kilometres, was unable to complete the stage.

With Centurion Vaude out of contention, Trek Pirelli 1 stepped up to challenge of Schurter and Forster. Fabian Rabensteiner and Samuele Porro took the race to the men in the yellow Scatta leader jerseys. Try as they may, Trek Pirelli could simply not distance SCOTT-SRAM.

Rabensteiner and Porro were, however, able to control the pace on the long descent of the Hörnli Trail, one of Europe’s longest flow trails, and along the singletrack past the Arosa Bear Sanctuary. On the forest road run-in to the final singletrack, which began 5 kilometres from the finish line in Arosa, the Trek Pirelli 1 team were unable to keep Schurter and Forster behind them. Once the SCOTT-SRAM team had clear trail ahead of them, they simply descended away to a comfortable victory.

“Our goal for today was to win the stage” Schurter revealed. “It was a good stage for us. Not too long, with lots of trails and nice descents. The day couldn’t have gone better. We got a lead on the first singletrack, with Trek Pirelli 1 and could work well with them on the second climb. Then, on the last downhill, we were able to get in front of them, establish a little gap and take the stage win. Which also means we extend our overall lead.”

“We’re in the best position going into the final 2 stages” Forster added. “It is now up to the other teams to do something; we don’t have to take any risks.” This could be key to him and Schurter securing the overall title. As Zwiehoff’s misfortune today proved, a small crash can be disastrous on the rocky, high alpine, trails.

Behind the pace-setting SCOTT-SRAM and Trek Pirelli teams on Stage 3, the fight for third was fiercely contested throughout the stage. Future Cycling Northwave, BMC Fischer and the BULLS Heroes raced the majority of the route together. The three teams swapped turns on the front until Kristian Hynek and Martin Stošek were eventually able to slip away, in the closing kilometres.

The Future Cycling Northwave team finished 4 minutes and 5 seconds behind the stage winners, Schurter and Forster. Trek Pirelli 1, meanwhile gave up 25 seconds to the SCOTT-SRAM team. BMC Fischer crossed the line in fourth, edging out the BULLS Heroes in a sprint.

After 3 days of racing, SCOTT-SRAM leads Trek Pirelli 1 by 5 minutes and 55 seconds. Hynek and Stošek move up to third on the general classification, 10 minutes and 52 seconds behind the race leaders. The BULLS Heroes and their support team, the BULLS Youngsters, complete the top 5 places.

Stage 4 of the Swiss Epic takes the riders from Arosa to Davos. It is also the Queen Stage of the race and, arguably, the best chance for Trek Pirelli 1 to unseat SCOTT-SRAM. The stage includes a massive 2 700 metres of climbing in 74 kilometres, including the ascent of the Duranna Pass. There are a few rewards in store for the teams too, including another run down the Hörnli Trail and the Flüela Trail.