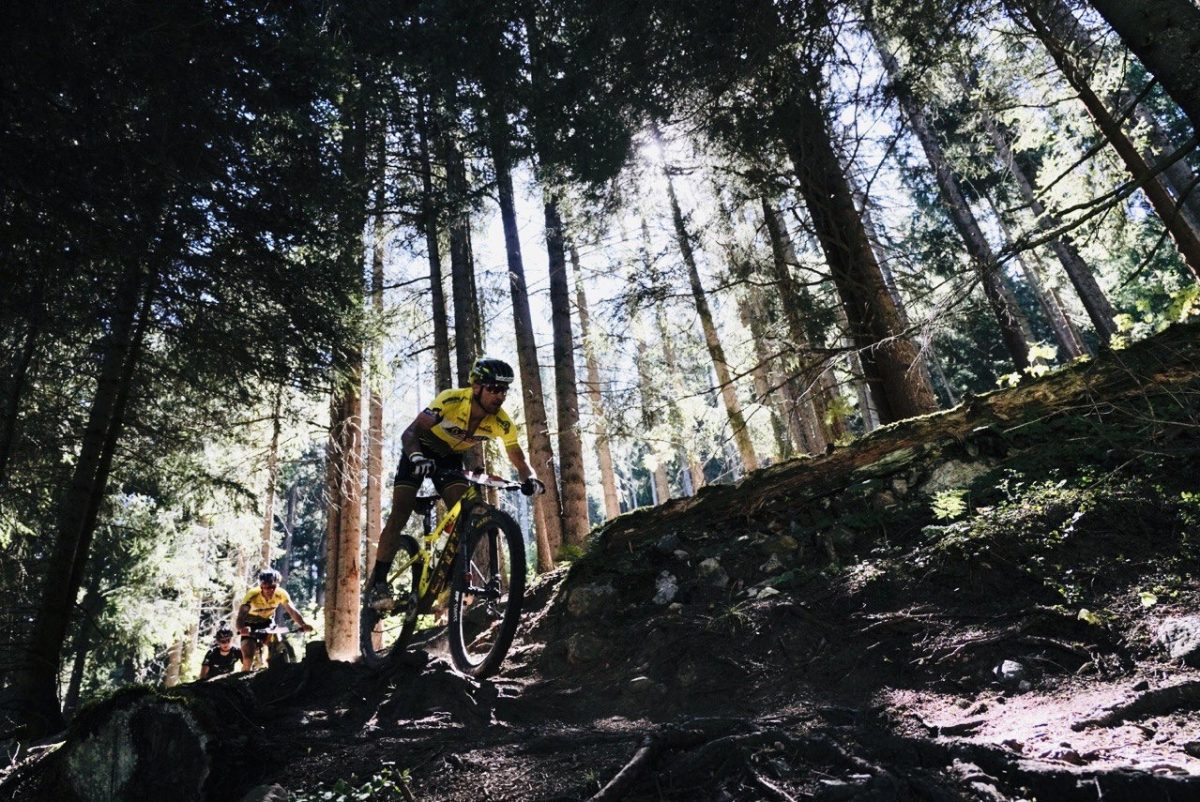 Nino Schurter and Lars Forster continued their march towards the Swiss Epic title on Stage 4 of the 2020 race. The SCOTT-SRAM pair rode to their third stage victory, in so doing extending their general classification lead to nearly 10 minutes.

Another flawless performance by Nino Schurter and Lars Forster saw them extend their Swiss Epic GC lead on Stage 4; on Friday, 21 August. The SCOTT-SRAM pair were the first team over the summit, at the highest point of the route between Arosa and Davos and controlled the gap to the chasing Future Cycling Northwave team all the way to the finish line. It was their third stage victory of the 2020 race.

It did not come easy, though. Kristian Hynek and Martin Stošek were joined in the task of putting pressure on Schurter and Forster by TEXPA-SIMPLON, all three of the Trek Pirelli teams, as well as the BULLS Heroes and Youngsters. Andreas Seewald and Markus Kaufmann, along with Rabensteiner, Samuele Porro, Hynek and Stošek were the only riders to maintain that challenge for a significant portion of the stage, however.

By joining forces, Future Cycling Northwave, TEXPA-SIMPLON and Trek Pirelli 1 were able to ensure that SCOTT-SRAM remained within sight until after the summit of the Duranna Pass. Initially, a large group had remained together, strung out by the climb through the Arosa Bear Sanctuary and the descent of the Hörnli Trail; departing Arosa. The 10-kilometre climb to 2 139 metres above sea level, the highest point of the day, thinned the contenders for stage victory down to four powerful teams.

Despite being put under pressure on the asphalt section of the climb, sections which have proven to be SCOTT-SRAM’s only – slight – weakness thus far in the race, the leaders refused to crack. In the final kilometre of the ascent, when forest road gave way to singletrack, they simply rode away from Future Cycling Northwave, TEXPA-SIMPLON and Trek Pirelli 1.

On the descent from the top of the Duranna Pass to Klosters, Schurter and Forster extended their lead to 47 seconds. In the remaining 28 kilometres the gap never dipped below that, until SCOTT-SRAM took their feet off the gas in the run in to the finish line in Davos. Future Cycling Northwave were, try as they might, unable to reel the men in yellow back in.

“Today went really well” Schurter allowed. “We had a good start and on the uphill we were able to stick with the leaders. Then on the downhill we opened up a gap and held the advantage to the finish. I’m very happy with another stage victory, but more importantly with extending our overall lead.”

Countering his partner’s playing down of the stage’s challenges, Forster clarified: “Today was hard! The other teams wanted to attack from the start and Trek Pirelli made it particularly difficult on the first climb, out of Arosa. Fortunately, the pace settled on the downhill to the lowest point of the stage and we were able, thereafter, to ride with the front group to the highest point of the day. There we were able to get into the singletrack first and, despite it not being that technical, we were able to open a little bit of a gap. From there, it was just an effort to hold the advantage until the end.”

Upon crossing the line, Schurter and Forster secured their third stage victory of the 2020 Swiss Epic. Their time for the 74-kilometre-long course was 3 hours, 30 minutes and 43 seconds. Hynek and Stošek were second, 23 seconds slower. Rabensteiner and Porro rounded out the podium places on the day but conceded a potentially crucial 3 minutes and 30 seconds to Future Cycling Northwave.

Going into the fifth and final stage of the race, SCOTT-SRAM’s victory is all but assured. Only a minor disaster can prevent them from securing the Swiss Epic title. Second place is far less secure, however. Only 1 minute and 27 seconds separate Trek Pirelli 1, in second, from Future Cycling Northwave, in third. The Czech riders will be doing their utmost to overturn that deficit on Stage 5.

With excitement thus guaranteed, mountain biking fans are encouraged to follow the action via the Epic Series app, from 08:30 (Central European Summer Time/GMT +2) on Saturday, 22 August. The final stage is a 61-kilometre loop, which starts and finishes in Davos, taking in 2 550 metres of climbing and some of the singletrack paradise of the Alps’ best trails.