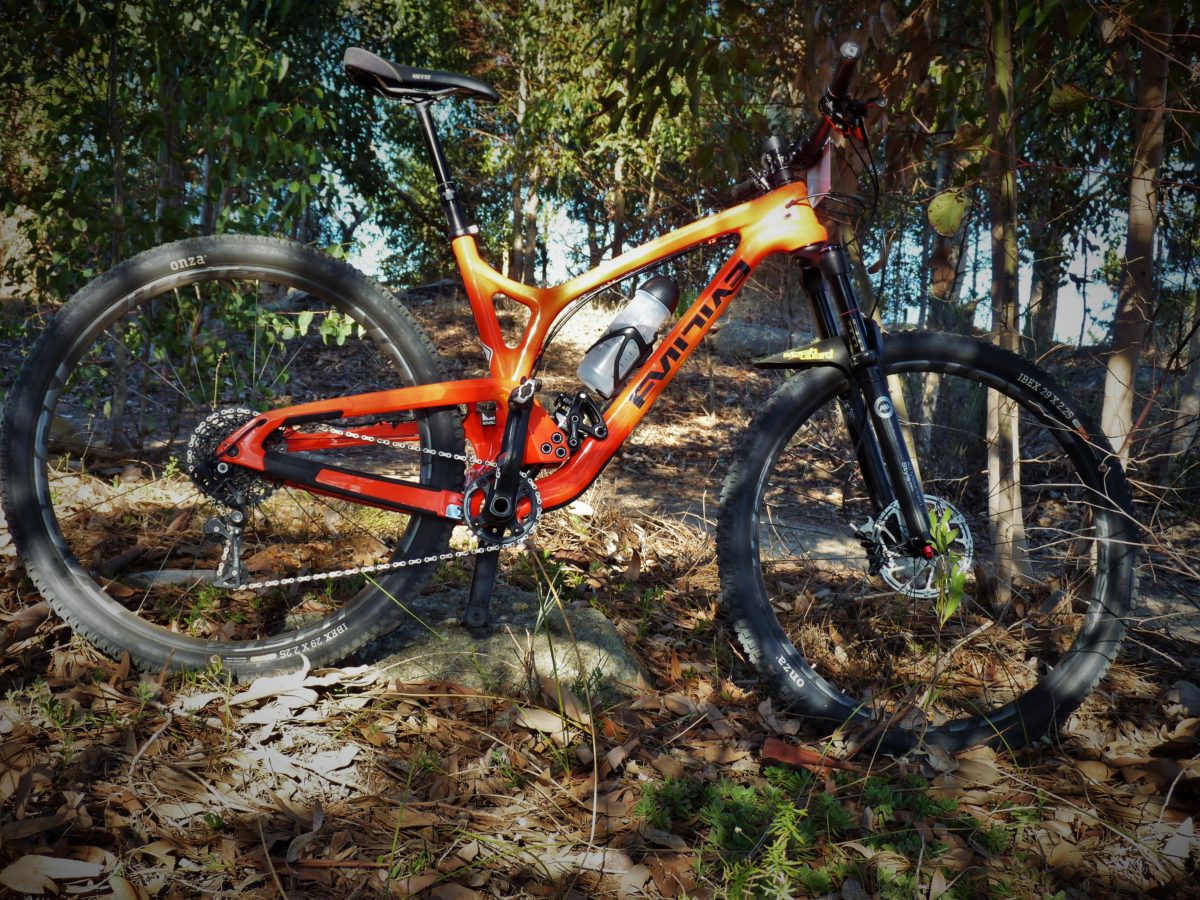 Evil Bikes fascinate us; in particular, the beauty of The Following! The natural flowing curves of the frame, give The Following a distinct, eye-attracting shape, that we love!

The American based company, becoming more and more popular in South Africa, has recently stopped using SRAM components on their bikes. Instead, they made the switch to Hope Tech, MRP Shocks and BOX Components, which we find, fits more into Evil Bike’s character. That character being, fun, adventurous, and fast! However, they’ll still be using RockShox as their standard rear shock, that comes with the frame on purchase.

As Evil likes to call it; “plastic fantastic” the Following’s frame is sculpted fully from carbon fibre. This kind of carbon can take a punch, in fact it’s so strong and durable, we’re pretty sure it’ll last you a life time.

On top of this All Mountain Style frame protection, Evil Bikes themselves, added a bottom bracket guard of their own design. As well as a stylish chain stay guard. The reason we like Evil’s way of frame protection is mainly because it blends in with frame colours, and seems like the really heavy duty type! So now an Evil Bike is almost guaranteed to last you a life-time!

Evil Bikes are also really well-known for their revolutionary suspension system. Namely, the Delta System. The character of the Delta System, is simple and weight friendly. With increased lateral frame stiffness. Paired up with the Delta System, is RockShox Monarch RT3 rear shock. Together, these two components make a plush, yet aggressive suspension character. The design is balanced as well, and gives you the confidence to pin it downhill!

That good looking fork in the front of our test bike, is none other than Rock Shox Pike with 130mm. Now, Evil Bikes are making the switch over to MRP Shocks, but you can still pick up the Following with SRAM components equipped on them. Then we had the Rock Shox REVERB dropper post, which, as always, comes in handy when you want to drop your seat for descents.

Moving on to the drivetrain, we had a blend of SRAM components. Firstly, the GX crank-arms, with a 32-tooth chain ring. Secondly, the SRAM XO1 1X11 rear derailleur that handled things down that end, smoothly. These two aspects of the drivetrain, although they be different models, give off a really comfortable gear ratio between the 32T chain ring and the 11 speed cassette at the back.

The last finishing touches on the bike, are the SRAM Guide RS brakes, with Easton’s, epic trail specific rims, the HEIST series. The Guide RS, provides some intense stopping power, while the HEIST rims keep you balanced and rubber-side down.

The Following truly owns the trail, and therefore, you feel confident on the bike. One of the reasons for this, is the stable centre of mass, which is the result of striking geometry. A 67.4-degree head angle gives you a relaxed, upright position. While the seat-tube angle doesn’t make you feel crowded over the handle-bars, at 74.3-degrees.

On the trail, we must admit, the Following was a bit tricky to pedal up technical sections, but we can only think this is due to the fact of longer suspension travel in the front. However, downhill was made extra fun, because of that extra suspension travel. We felt completely balanced on the bike, and that gave us confidence to power downhill at high speeds. When railing berms on corners, there was no doubt in our minds that the tyres would lose grip, giving us even more confidence and aggression on the trail.

“The Evil Following is so nimble and maneuverable on single track, that it literally allows you to forget about everything and just cruise, freely!”

The gear ratio and frame design allowed for really good pedaling, all-track round. Then, the wide Race Face handle-bars increased handling to perfection, while the convenience of the RockShox REVERB dropper post, allowed us to catch some air, properly!

All-in-all, the Following has a great, loose-vibe, with all the added aggression of an XC bike. It’s definitely a good target for the SA market, as people these days, want a bit of trail and XC character blended into their bike.