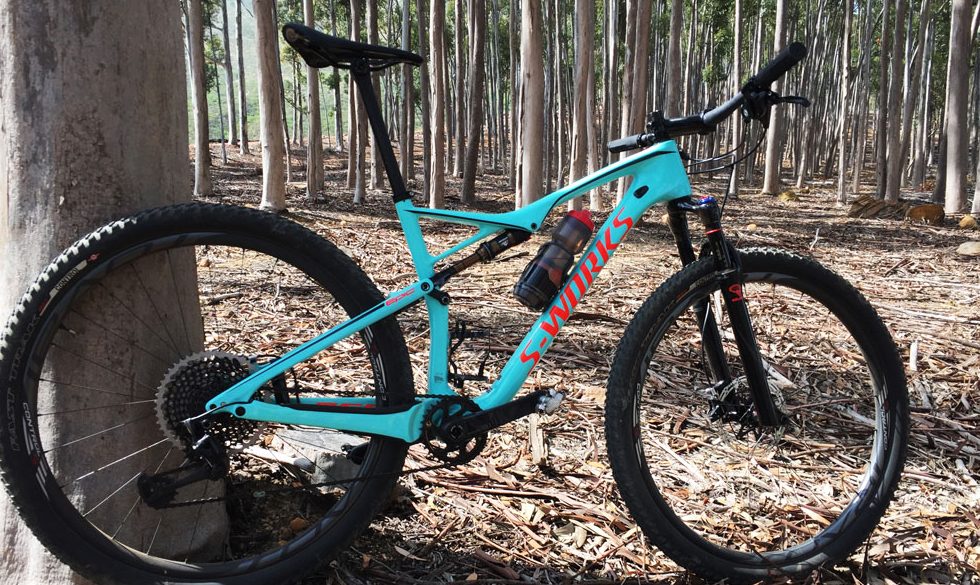 So let’s get started. First off, just look at it. This bike looks fast. That baby blue and rocket red paint. It’s just gorgeous. But this bike is not just about looks. It goes just as fast.

The frame is Specialized’s Fact 11m carbon frame, which is the lightest, stiffest carbon they make. The S- Works is also the only model in the range that has a carbon rear triangle as well. This drops the total weight of the bike to a feathery 9.7 kgs (without pedals). That’s pretty impressive.

The frame also has a slightly different geometry than its marathon focussed brother. The chain stays on the World Cup is 5mm shorter than the standard bike and the suspension (front and rear) has 5mm less travel. This makes for very nippy handling. It does hamper the climbing a tad, though. The bike tends to want to lift at the front every now and again, but nothing dramatic and it’s a worthwhile compromise.

The Epic World Cup features Rock Shox’s brand new SID XX WC, which is claimed to be around 200g lighter than the previous model and it is also quite a bit lighter than their RS-1. This particular fork also features Specialized’s Brain technology, which takes care of all the locking and unlocking of suspension, without the rider having to push any levers. I had the Brain Fade set to its softest for most of the testing. This means that the Brain is very active, constantly working to keep the fork working. The firmer setting, whilst effective at keeping the fork locked, tends to not absorb bump as well while climbing and on flats.

The rear suspension is handled by Fox and Specialized’s mini brain, as found on all the Epic models. The one on the S- Works is the Kashima coated Factory model. The Brain was also kept on its softest setting, for maximum suspension activation. The Brain at the rear really does work well. There is absolutely no pedal- bob whilst climbing, but works perfectly when descending.

A new feature for the 2017 bike is the Sram Eagle 12 speed group set. Sram have gone out on a leap and declared the front derailleur a thing of the past and focussed all their attention on perfecting the 1x system. This meant that the gear range of the rear cassette was increased to a massive 500%.

I was worried that the gaps between gears would be too big and that I’d get stuck between gears, but it was a very pleasant experience. In essence, the first 11 gears are exactly the same as the previous 1x 11 system, it’s just the massive 50t sprocket that is added. Shifting was smooth and quick and the shifter had a very precise and definite “click” which meant that you would never accidentally shift and lever feedback was always precise and fast.

The brakes are Sram’s new Level offering. Ever since Sram released the Guide brakes and dropped the Avid Elixer, their brakes have only gotten better. The level brakes only have two pistons per calliper, but this does shave off quite a bit of weight. And let’s face it, four piston brakes are a bit overkill on an XC bike.

The bike comes as standard with in- house Roval Control SL wheels, with essentially DT Swiss hubs. These wheels are the top offering in Specialized’s XC/ Marathon range. They are extremely light, weighing in at a claimed 1350g for the set. This light weight is quite evident in the ride. The wheels are extremely responsive under acceleration and extremely stiff in cornering, making the handling of the bike superb. The light wheels also make for very fast climbing.

They have done away with the S- Works casing on the Fast Trak tires and have now fitted the bike with the Control casing tires. This does add around 50g per tire, but with the thicker side wall it does add a lot of piece- of- mind and it also means that you can run the tires at a slightly lower pressure. I would have preferred that they put a tire with a slightly more aggressive tread on the front, because the Fast Trak felt a bit loose on the front.

As you would expect on a top- end bike, the finishing kit is all of the best things Specialized has to offer. Starting at the front, it features the S- Works carbon flat bar which is not only light, but dampens vibration. At the back the bike has an S- Works carbon seat post. Atop that is the S- Works Phenom carbon saddle. It features a carbon shell and carbon rails. It has what Specialized call level 1 padding which is slightly thinner, but many would prefer less padding on the saddle.

All in all, this bike lives up to its heritage and will continue to do so for many years to come. It is still at the pinnacle of XC racing and delivers all the goods in a very stylish package.