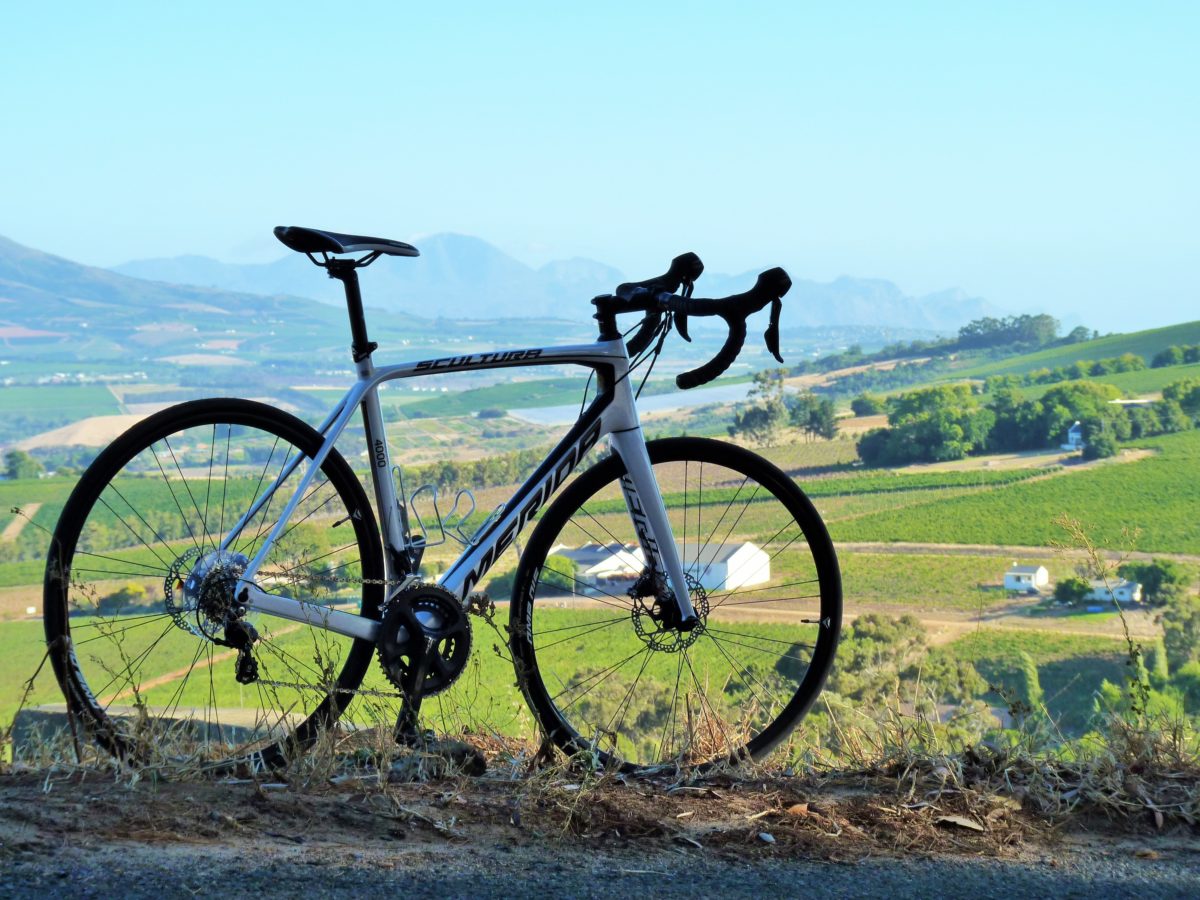 From the word “go” the Merida Scultura stood apart from the rest, as a bike that would go long distances and look “dope” while doing it!

We found the bike to be quite versatile, switching between fast corners and long climbs, the Scultura managed it all, while keeping the rider smiling! This Disc-brake model was particularly a stunner with brake power, which we utilized fully.

Road bike with a disc…

The frame is composed of Merida’s CF2 carbon, which kept the bike as stiff as you could imagine. However, Flex-stay technology gave the bike a natural compliance over the test terrain.

The fork is also full-on carbon fibre, with no compromises in the area of the brake calliper mount. Merida integrated the disc brakes pretty well on a carbon frame, as there is no apparent untidiness about where the mount meets the frame.

Then you have Merida’s Disc Cooler system added to the pair of Shimano RS505 160 hydraulic brakes. In our opinion, this is a great feature, as it ensures that maximum brake power will always be at your disposal, by preventing the discs from getting too hot.

Not to mention the hydraulic factor of the brakes, which remove a large amount of stress on your hands. Personally, we never got tired of pulling brake levers, because you hardly have to apply pressure to the lever and you’ve already got a fair amount of stopping power.

The aero features of the Scultura remind us why the beauty of road bikes will never die. An example of this beauty, is the elegant top-tube. Its design from the top of the head-tube, runs back in the shape of an aeroplane wing. Kind of creating an air piercing frame vibe.

The seat-tube and down-tube design were adapted from Merida’s TT and Reacto bikes. This particular design adds what Merida calls an NACA Fastback profile to the frame. If you’re riding in Cape Town (which we were) and the wind picks-up to a penetrating 40km/h; you become somewhat grateful for those aero advancements.

What really jumped out at us, was the fact that this bike is not a ‘top’ mode, but we found the aerodynamics to be equivalent to a ‘top’ model bike. Value for money was the purpose of the Scultura 4000’s frame.

To add to the brilliant aerodynamics of the frame, is the wheels. Namely Merida’s Comp 22 Disc rims and Continental Ultra-sport 2 tyres, that make one of the best pairs for compliance in the wheel-sets. Plus, they are extremely aerodynamic.

When you ride a Scultura:

Okay, so the part we’ve been waiting to tell you about is finally here. The bike experience. Looking at the Scultura 4000 Disc as a whole, and taking into account the benefits of aerodynamics and technology, we were fully able to understand why the bike performed the way it did, on the test terrain.

First up, was climbs. At 8.75 kg, the Scultura 4000 climbed really comfortably; the weight of the bike was completely bearable. Then we had the excellent gear ratio from the 2×11 speed Shimano 105 drivetrain. It was unmistakably snappy and crisp, and made long hours in the saddle, a pleasure.

Then came the downhill test. The geometry of this bike was essentially the deciding factor; whether the Scultura would pass the downhill test or not. The 73.5-degree head tube and 73-degree seat-tube angles, gave-way to a spacious, but aero position when dropping onto the dropper bars. Not feeling cramped in this position, benefited the way we handled the bike. For example, we were a lot more lenient on the handle-bars when carving through turns. The bike naturally flowed in and out the apex of corners.

Merida advertises this bike as an endurance road bike and we can see why. You see, the minimized effort that goes into braking and the responsive handling, allowed us to have more energy when it came to ‘flatter’ sections and we are able to out-pedal our mates! Plus, the Scultura 4000 had the attitude of wanting to go further, and that ends up rubbing off on the rider, admittedly.

In Cape Town, strong head-winds are inevitable. Yet, with the Scultura, despite head-winds, we were able to cruise comfortably. That’s the overall delight of the Merida Scultura 4000 Disc! Enough said!