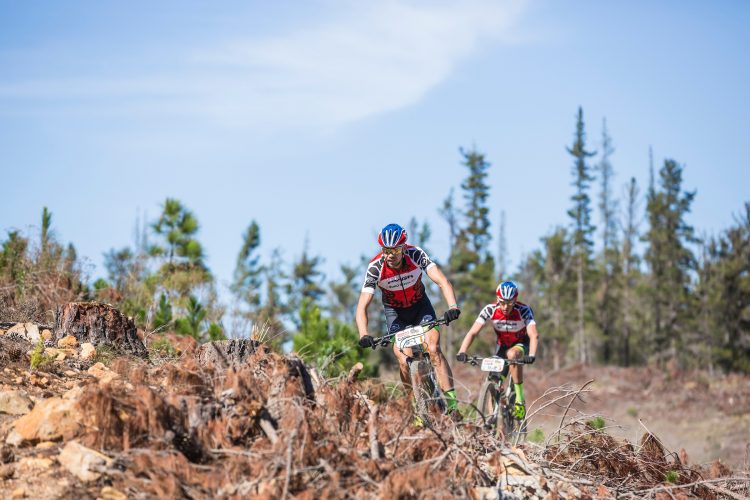 Philip Buys and Matthys Beukes of Pyga Euro Steel have seen red more than anyone else at the Absa Cape Epic but this year it’s the yellow jersey that’s on their radar.
Buys has won the red Absa African special jersey three times, while Beukes has lifted the Burry Stander Memorial trophy on four occasions, but their aim for 2018 is to become the first all-African team to be crowned champions at the Grand Finale. With a strong fifth place in 2017, Buys said they will go into the race better prepared than ever.
“Our first ambition is to win the general classification,” said Buys, “but we will constantly assess and adjust our plan after each stage. If we find ourselves too far off a general podium position, then we will back off a bit for stage wins and secure the Absa African special jersey. The extra publicity of the red jersey is great for our sponsors but we want to compete against the best in the world – not just against the locals, so we keep on elevating our goals.”
Having a back-up team has become a vital part of any challenge for the yellow jersey at the race. Buys and Beukes will be able to push hard at the front knowing they have mechanical support from their second Pyga Euro Steel team comprising Phillimon Sebona and Julian Jessop. Sebona has won the Exxaro special jersey twice and, at 26-years-old, has five Absa Cape Epics to his credit, while the 20-year-old Jessop will be making his debut.

“My training has changed a bit more towards longer intervals and more torque efforts – low cadence intervals – on the bike, but our biggest changes would be more on the support side of things behind the scenes. Our sponsors have enabled us to expand our support crew and build on our team infrastructure. The bottom line is that we will be more relaxed and comfortable at Epic,” quipped Buys.
With 11 Absa Cape Epics and five stage wins between them, Buys and Beukes have the experience of the many challenges the route can throw up. Buys, who rode in the 2012 London Olympics with the late Burry Stander, believes cross-country skills will be just as vital at the 2018 race as stamina.
“If you look at the stage distances, the first half of the race seems to suit the marathon riders a bit more and then the last few stages seem to suit the cross-country riders more,” said Buys. “But I think that in general, cross-country riders, or riders with more skill are more efficient in their riding and save a bit more in the long run. That would be key during the end stages of any multi-day stage race.”
“If you can go into the last few technical shorter stages in and around Wellington slightly fresher you can make up time. You can win the race if you are able to stick with the marathon guys in the early long stages and then punch them in the last stages when they are a bit more fried. In my opinion the course will not necessarily determine the results, but rather your team plan and tactic.”
“The shorter more technical stages seem very attractive, but we have proven before that going for the queen stage can also pay off for us, maybe go big when everyone least expects it.”
Source: ABSA Cape Epic