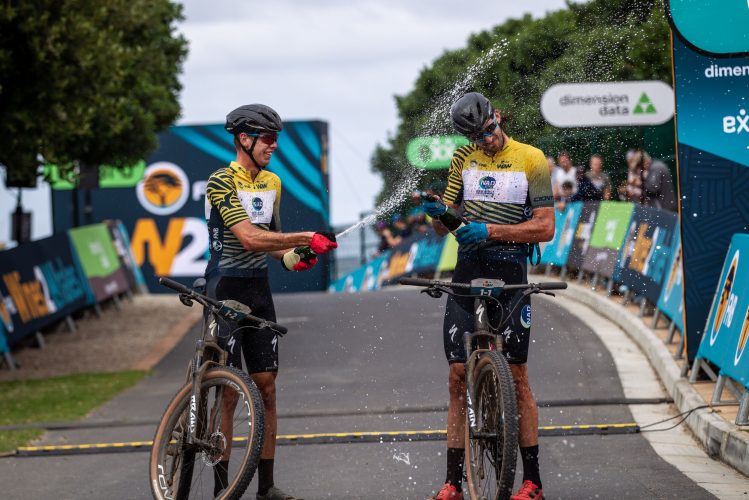 NAD Pro MTB wrapped up the 2019 FNB Wines2Whales Shiraz title in fine style, by winning their third successive stage, on Sunday, 3 November. Stage 3, which started in Oak Valley and finished at the seaside in Onrus, saw Matt Beers and Wessel Botha cross the line first; their stage-winning feat was matched by BMT Fairtree in the Exxaro Special Jersey.

“From the start, today, we set quite a hard pace” Botha recounted about how the final stage was won. “The plan was to test the other guys a bit. On the Houw Hoek climb, we saw DSV Pro Cycling struggling a little bit. So, we knew we were the stronger team. On the Kat Pas, we took it easy, to avoid punctures, and they re-joined us.”

The NAD Pro MTB team and DSV Pro Cycling’s Gert Heyns and Arno du Toit went through the first waterpoint, at Botrivier Primary School together. The quartet then raced their way through the Wildekrans singletracks in close formation, before the open climb towards waterpoint 2 provided an opportunity for Beers and Botha to attack.

“On the climb to the Art House, Matt wound it up and we managed to get a gap” Botha continued. “From there it was just heads down to the finish. We went full gas on the road sections but took it a little easier in the singletracks, just to avoid any punctures or mechanicals. Luckily we could hold it to the finish and take the third stage win.”

“To come back as the defending champs is not always easy” Beers reflected. “There is always extra pressure and it doesn’t happen often that a team can defend their title. To get three stage wins in doing so was just a bonus. I’m really happy to get another win.”

“I was a last-minute call-up. Nico Bell phoned me on Wednesday and told me that he couldn’t race because he had a chest infection” Beers clarified. “I’ve been riding a Specialized Epic Evo Comp, so I actually raced on Nico’s bike. Fortunately, we both ride extra-large frames – it went way better than I expected. Wessel has progressed so much since he joined the team; people underestimate him because he is so softly spoken, but he is one of the best mountain bikers in the country” he concluded, praising his young partner.

DSV Pro Cycling was caught by a recovering PYGA Euro Steel in the Gaf se Bos singletracks between the Art House waterpoint and the Karwyderskraal Road. That set up a tense final 20 kilometres for Heyns and Du Toit, who had clearly  burnt too many matches trying to take the race to NAD Pro MTB.

“The prize money for second is still a nice bonus at the end of the year [R50 000]” Heyns confessed after finishing second on the stage and second overall. “Matt and Wessel rode really well. We tried our best, so second is not too bad.”

“Today we kept up with NAD really well” Heyns explained how the day unfolded from a DSV Pro Cycling perspective. “When they decided to really go, we just didn’t have the firepower to follow them. But luckily, we could still hold onto second overall.”

PYGA Euro Steel’s Philip Buys and Matthys Beukes finished the stage in third, after losing out to Heyns and Du Toit in the sprint for second. The result secured them third overall, on the final general classification standings. NAD Pro MTB’s time of 7 hours, 32 minutes and 37 seconds was a massive 27 minutes faster than the event record, set by Buys and Beukes in 2017. DSV Pro Cycling and PYGA Euro Steel both comfortably beat the previous record time, as did the fourth-placed team of Keagan Bontekoning and Jean-Pierre Lloyd. The fifth spot on the overall standings was filled by SPOT Africa DEVMCO Umhlanga Arch’s Timothy Hammond and Julian Jessop.

The Exxaro Special Jersey competition was won by Luyanda Thobigunya and Lorenzo le Roux. The BMT Fairtree pair claimed their third successive stage victory, capitalising on a crash by one of the Exxaro/PwC1 riders. Lucky Mlangeni and Anrique Davids were helped to the line by the Exxaro/RMB1 team of Thabiso Rengane and Khutso Tlou. Though Rengane and Tlou outsprinted Mlangeni and Davids to claim second on the stage, Exxaro/PwC1 maintained second in the Exxaro Special Jersey race’s overall classification, while Exxaro/RMB1 completed the podium.

Along with the prize money that Thobigunya and Le Roux won for their stage wins and general classification title, the pair also won education bursaries. Curro Schools donated two scholarships, covering school fees from Grade 1 to Grade 12 for a family member of each of the winning riders. Valued at 1.2 Million Rand each, the prize truly showcases that “bicycles change lives.”

Back on a cycling front, there was excitement on the final day in the Mixed category as a three-way sprint for second unfolded. Conway Brett Oliver and Catherine Williamson pipped Marco Schaer and Yvonne Waltert, along with the Linaqua team of Henry Liebenberg and Christie Hearder. The overall standings remained unchanged, with Fairtree’s Jennie Stenerhag and Craig Gerber securing the title by 4 minutes.

Giordana’s Schaer and Waltert maintained their second position in the category’s general classification standings, despite finishing third on the final stage. While PITSTOP SPORT 2’s Oliver and Williamson completed the podium; behind the dominant Stenerhag and Gerber.

With the Shiraz champions crowned, the 2019 FNB Wines2Whales series of events came to its conclusion. Attention now turns to 2020 when the famous race from the wines of Lourensford to the whales in Hermanus will change direction. The Switchback event sees the race change direction and 2019 riders have access to priority entries to this exciting initiative until midnight on Sunday. General entries to the 2020 FNB Wines2Whales Switchback open on Tuesday, 5 November 2019. For more information please visit www.wines2whales.com.