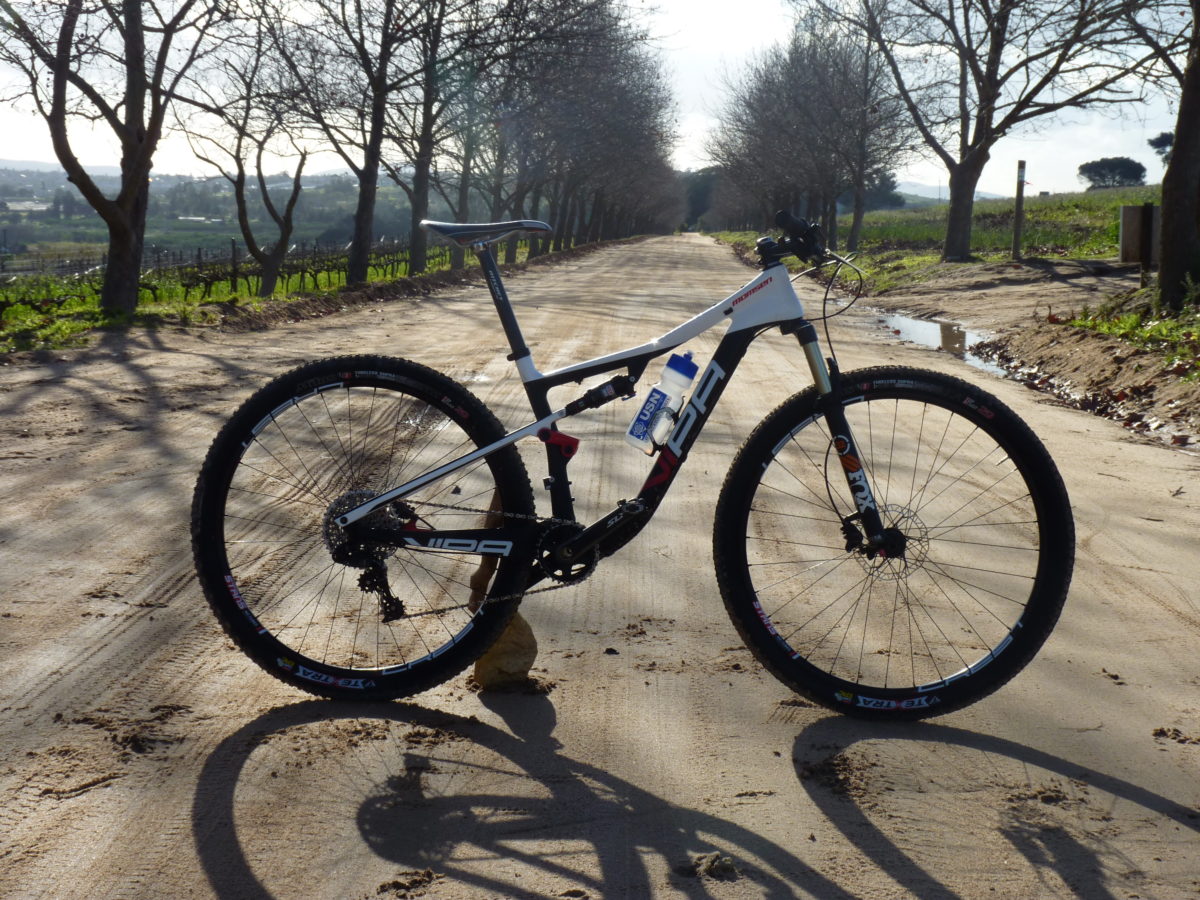 The Momsen VIPA One, is a proudly South African, no-nonsense mountain bike. It finds its home-grown roots deep in the untamed, Baakens Valley. Where Momsen took the MTB industry by the horns, and created a dual suspension bike, that’s fast, playful, and truly appealing to any XC/Marathon racer!

The VIPA series, considered by many as SA’s first ‘super-bike’, has clocked countless podiums. I recently got my hands on one, set it on the toughest trails I knew of, and fell for its natural untamed behaviour. Now I know why they say it was forged in the untamed…

The VIPA’s fully carbon frame, came out race ready. The lightweight nature, gave the bike a nimble feel, by demonstrating easy handling and inspiring me to get sprinting on climbs.

The VIPA One was designed with 80mm of rear travel; which was ample for soaking up drops, and powering down long downhills. Taking care of all this absorption was RockShox MONARCH RL, that also came ready with a firm lock-out setting, for extra steep climbs. The swing arm of the frame, paired up with the MONARCH conveyed my pedal stroke power effectively. Especially in lockout mode. I found that, hardly ran out of breath or leg power, over long rides.

Momsen had the VIPA’s specialty set at marathon racing; and the most prominent reason for that, was their integration of two water-bottle holders. Extra water, is what any marathon race needs. So Momsen took the liberty and provided that space for more water, on the VIPA. Not to mention their smart, top-tube integrated, tool carrier.

Last, on the focus of the VIPA’s frame, was the vivid aesthetics. I love a bike that stands out, in this regard. Due its inspiring terrain map of Baakens-Valley on the top-tube, the VIPA initiated that spark in my mind to go further, faster!

“So, it’s a South African bike that inspires!”

Our Momsen VIPA One test rig didn’t have the standard spec, that Momsen sells the bike with. However, the test bike did feature some excellent Ritchey Carbon Components, and Stan’s No-Tubes wheel-set. Plus, there was the super compliant FOX 32 Performance fork on the front, which proves that our test bike, was no ordinary, standard VIPA model. As the standard VIPA One model comes out with a RockShox REBA RL 100mm fork.

For me, it was a very good example of what you can do with a Momsen VIPA One frame-set. You could have customized your VIPA One to suit the type of riding you do, and to get the right performance that you want.

Shimano M506 brake-set – Could have a larger disc on the front wheel, for more effective braking power.

STAN’S No-Tubes ZTR CREST Mk3 wheels – Kept me rubber-side down at all times.

The VIPA was certainly a bike with seven personalities, interchanging between the fun side and racing snake vibe!

The climbing trait of the Momsen VIPA, was lightweight means faster, means higher. I personally went further on climbs, seeking that pace that would make me faster. Traction was felt at full blast as-well; with no slipping even on the steepest of climbs.

On the pedalling side, the VIPA’s geometry certainly helped me conserve energy. While I wasn’t motivated to get out of the saddle and sprint, the bike was intensely, straight forward, with its 70.5-degree head tube. Handling was elevated though, through the 73.5-degree seat tube, as I could balance myself effectively over the bars. The less thinking I did worrying to keep balanced at high speed was entirely relieving and was able to focus solely on my technique.

That brings me to the downhill trait of the VIPA. The 29er wheels and adequate suspension travel, always kept me accelerating. The VIPA pressed on, despite the trail’s utmost intention of trying to derail the bike from its ultimate goal. Being fast, over rocky topography.

Momsen’s love for implementing compactness on the bicycles was shown entirely, as the VIPA swung in and out of berms of single-track. The tight feel to the bike, kept me flinging the tail up in the air constantly. Therefore, exhibiting the exhilarating fun side of the VIPA.

After the fun and games, I got to testing the marathon aspect of the Momsen VIPA. Admittedly, at the end of 60 kays, my legs were finished; but the VIPA was still fresh. The 80mm of rear travel was easy on my body, by soaking up anything that would hurt, and thus keeping my legs ploughing on. While the 1X11 gear setup made me sweat over the long course, it did keep my average speed up. Which is something that looks good on STRAVA. So, the marathon side of the VIPA had its pros and cons. However, the bike’s ability to persevere and not give away mechanical problems, was strongly appreciated. Built tough to tackle tough!

The ride got me thinking. The way the Momsen VIPA performed on the test terrain, was as if the bike in itself was prepared to face that type of rough terrain. South African soil sets-out a unique terrain that involves jagged rocks, steep climbs and single-track sites that maintain the stoke. Since the VIPA was developed in these types of territories; it was inevitable that the bike would perform accordingly. Thus, being prepared for South African terrain, is one exceptional advantage, exclusive to the VIPA series.