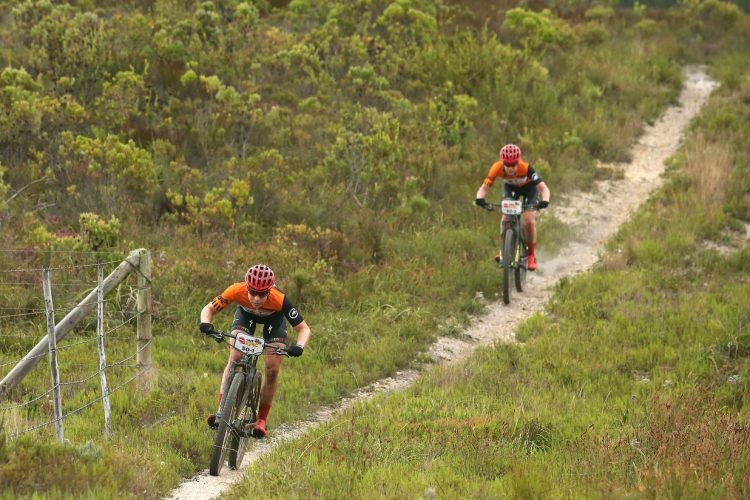 There was a tacit admission from their nearest rivals that the mountain biking-road riding combination of Annika Langvad and Anna van der Breggen have already almost done enough to ensure their rivals are racing for second in the Women’s category at the Absa Cape Epic.

After just two days of racing at the Absa Cape Epic, the Investec-songo-Specialized duo have already opened up a massive five-minute 42-second lead over Kross-Spur Racing’s Ariane Lüthi (Switzerland) and Maja Wloszczowska (Poland)

After crossing the line following the gruelling 111km Stage 1 that started and finished in Hermanus on Monday, Wloszczowska made it clear their strategy for the day was aimed more at defending second place rather than closing the gap on the leading pair.


“We did not even try and stay with (Langvad and Van der Breggen),” said the 2010 cross country World Champion. “If we had tried to go with them at the beginning we would have killed ourselves.”


Langvad, a five-time mountain bike marathon world champion, and her equally proficient road-riding specialist partner Van der Breggen, were allowed to ride away from their rivals on the early climbs out of Hermanus. They built such a big gap so early that the only other riders they saw for almost 100km were the male riders they caught and passed from the elite male batch which started 10 minutes earlier.


At the finish, after five hours, nine minutes and 11 seconds of riding, the Danish / Dutch combination had extended their stage lead to 3:07 with a controlled ride.

While the overall lead grew alarmingly for their rivals, their ride was not completely faultless as Van der Breggen arrived at the finish with a trickle of blood down her left shin.

“On the gravel road I took a tumble,” she said. “It is so slippery everywhere out there. The technical stuff is okay, it is just difficult because you have to pay attention all day.”

Van der Breggen also found the overhead conditions difficult on Monday and despite their growing advantage was wary about making predictions going forward.

“It was hot today … it was really hot out there. On a MTB you have to go hard from the beginning so it is more than five hours of going fast which is tough for the body of course. First we get some recovery after today and then we see what happens tomorrow. I am so tired at the moment” she added with a smile. “But we are really happy with how it has gone so far.”

Wloszczowska was pleased with Stage 1 despite a tough 111km ride where they struggled to hold off the third-placed- Summit Fin team of Candice Lill and Adelheid Morath.

“I have a huge back pain, but otherwise it was all good,” said Wloszczowska. “We tried to keep the pace steady so we can reach the finish without hitting the wall on the way, but it was a hard stage.

“The Summit Fin girls were pushing super hard almost all the time. First we got a pretty big advantage and then they closed the gap again, so we had to push hard again – it was a crazy battle today.”

“If we had tried to go with (Langvad and Van der Breggen) it would have been quite risky with 111 kays, so I hope they enjoyed the ride. I am happy we are still only three minutes back. I think for five hours of racing it is not really a lot … I was expecting a lot more so I think it is still close.” Wloszczowska added.

Close is a relative term, but Van der Breggen’s minor tumble will also serve as a warning that although Investec-songo-Specialized are clearly a step above their rivals, the nature of mountain biking means victory is never guaranteed and a mechanical or a fall can shake up the leader board at any time.

In the race for the African Women’s jersey race, the dormakaba Ladies team of Samantha Sanders and Amy Mcdougall added 13 minutes to their advantage over the Galileo Risk pairing of Theresa Ralph and Sarah Hill and now lead the jersey by 42 minutes.

Tuesday’s Stage 2 is relatively short in kilometres, but with 2 250m of climbing packed into the 86km stage from Hermanus to Oak Valley, the day will still be a tough test likely to be remembered by the riders for the brutal six kilometre Wildekrans Tokoloshe that gains over 500m in one tough climb.