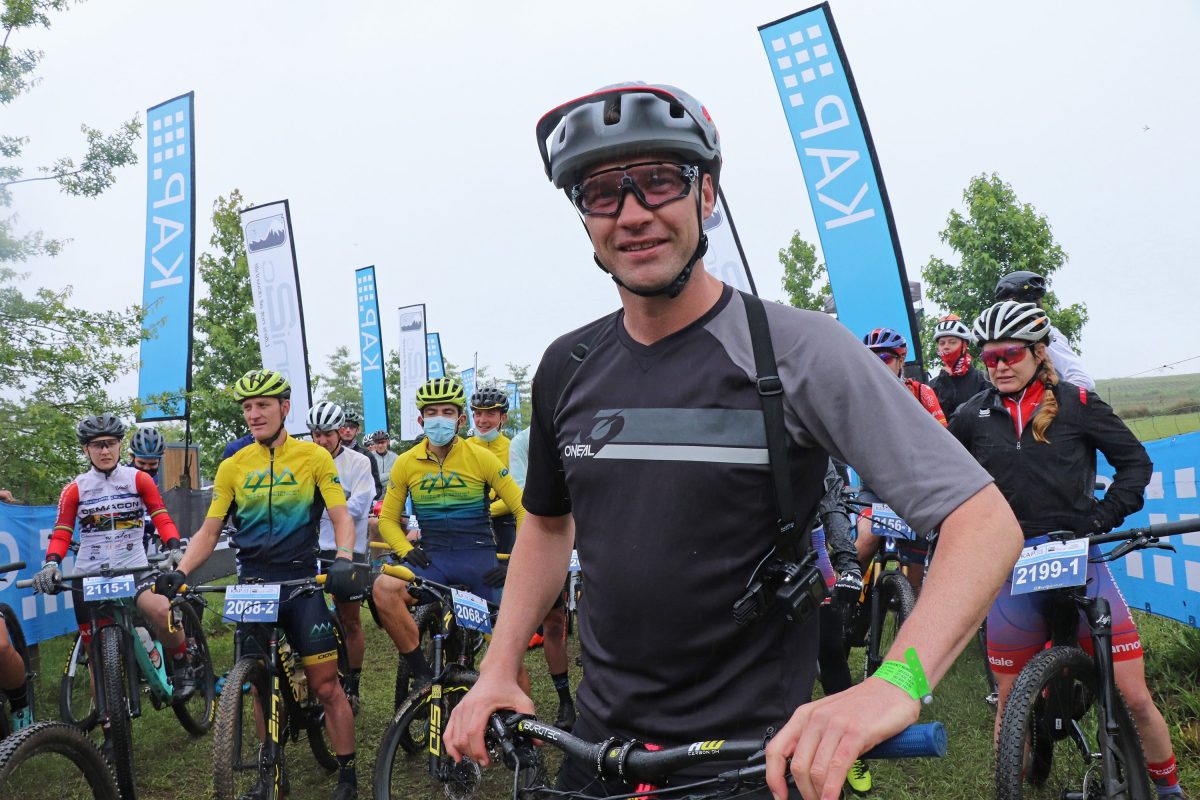 South African mountain biker Greg Minaar is undoubtedly the world’s most successful male downhill rider in the world, so you may be surprised to hear he is riding day 2 of the KAP sani2c today, on an e-bike.

Minaar flew in from Andorra on Wednesday after a successful season in Europe, and made his way to Mackenzie Club in Creighton to join the nearly 500 riders taking part in the KAP sani2c Race. The sani2c is the world’s largest 3-day mountain bike race, this year taking place on a much smaller scale due to the COVID-19 pandemic. Starting at Glencairn Farm near Underberg in KwaZulu -Natal, the race takes riders 265kms to Scottburgh on the South Coast.

It was a wet and muddy start to Stage 2 this morning, with the decision being made in the early hours to re-route the race due to dangerous conditions for the descent into the Umkomaas Valley. This means that today will be a neutral day and tomorrow’s Stage 3, 86 kms from Jolivet farm down to Scottburgh Golf Club, will be the decider of who takes the 2020 KAP sani2c titles.

Greg won’t be competing though, he only joins the race for day 2 and is riding on an e-bike with friends from Pietermaritzburg, his home town.

“I am riding the Santa Cruz Heckler, an e-bike, tomorrow. We are doing this for a bit of fun and obviously I didn’t ride from the start. I am joining in on day 2, and I am riding with some very new to mountain biking good friends of mine who only got into mountain biking during lockdown. While we were in lockdown we said we should do sani2c.

“There is no ways these guys are going to make it on a regular bike, so I thought I’d ride with them.

I have done sani2c multiple times on a regular bike, I am not here to prove anything, I’m just here to have a good time, and I thought it would be fun on an e-bike.”

Day 1 of KAP sani2c saw perfect weather with muddy conditions, much cooler than expected, where team DSV Pro Cycling took the stage win in the men’s race with dormakaba first in the women’s race.

The rain came down at Mackenzie club in the afternoon and more rain was expected for day 2, ultimately resulting in the day being declared a neutral day.

Asked about his 2020 season, Minaar says: “I had such a great season. Obviously with COVID we had a different season and a shortened season, but we had four World Cups through two different tracks. Obviously World Champs was a bit of a messy race with the rain but its just what happens.

“World Cup season kicked off on a track that I am not particularly favourable on, and I have had a mixed bag of results. I really battled to read the terrain and so I was really happy to come out 7th overall. Then we went to Portugal where I am a little bit more comfortable, and I managed to win a race and come second, a very close second. That just got that fire lit.

“I had a broken arm two years ago so I missed a season and my season last year coming back was a bit tough, but this year gave me the feeling that I can win again.

Minaar has no plans to retire any time soon: “Not this year or next year, I still feel that I can win. I think when the fire burns out, when you feel you can’t win, that is a good time for me to retire. I want to be up at the sharp end.”

“When I look back, I started travelling at 16, I won my first World Cup in 2001, so it has been a while. I have loved it, every minute of it. What’s is so cool about this sport, is that we have so many ways to enjoy a mountain bike, or bicycles. We come here and we do 100kms of really amazing trail in Africa, and we’re used to racing on the slopes in Europe. The bicycle is such an amazing tool that is so versatile, you can use it everywhere and enjoy the environment for what it’s made for.”

Minaar has been training for the last month in Andorra and says December can be challenging for training because he is such a sociable person. “I am not chilling out but I know there will be interruptions. I am really thankful to Farmer Glen to be able to pop out here and ride from day 2 onwards.”

KAP sani2c will wrap up at Scottburgh Golf Club on Saturday morning after the final 86kms.