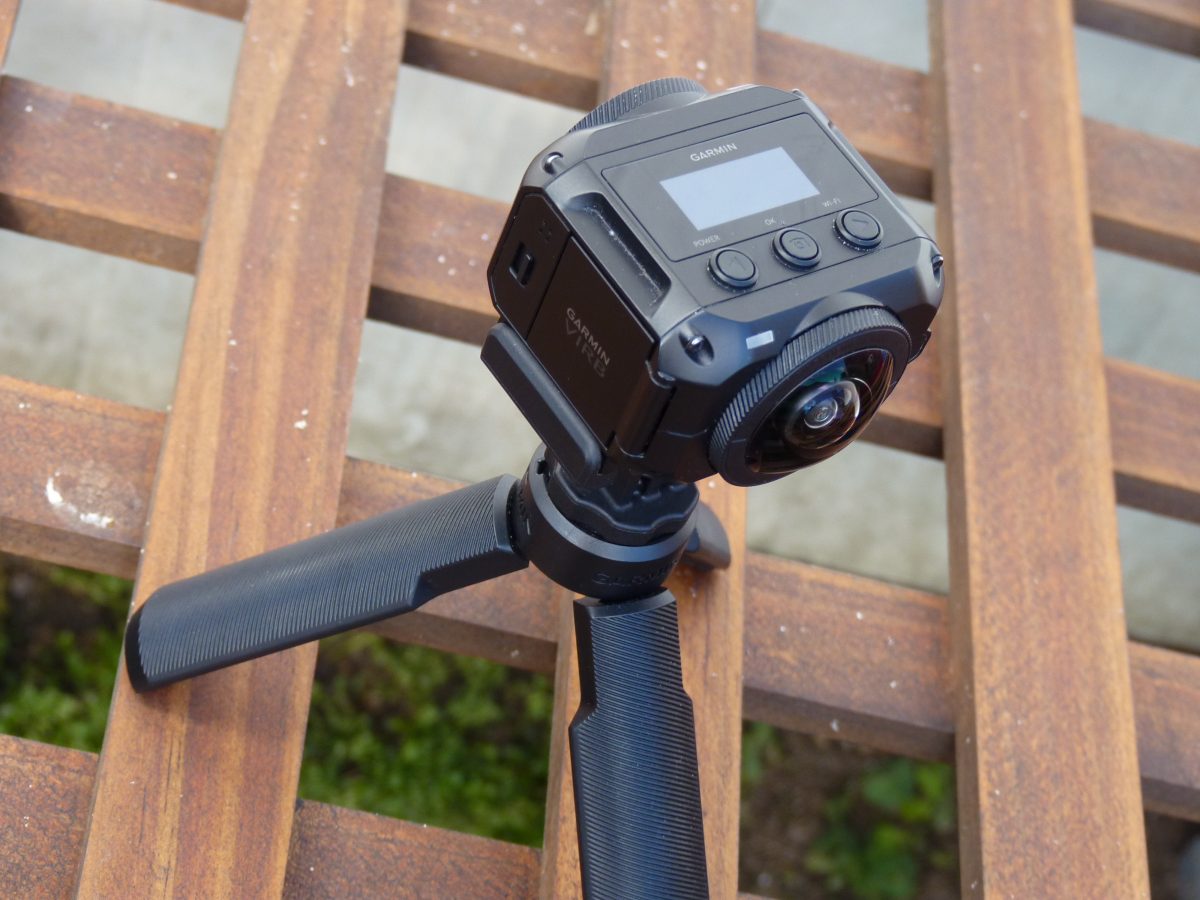 The Garmin VIRB 360-degree action camera, deserves its portion of admiration. Whether from a mountain biker’s perspective, or full-on adrenaline junky. We’re certain that this camera will go above and beyond your expectations. Garmin has followed a simple course in the design of the VIRB 360, and one that’s focused on the user. That being; record, immerse, and share!

We’ve grown accustom to the unique aspects of the VIRB 360. During our almost 3-month test of the camera, we’ve become convinced that with the Garmin brand, you’re guaranteed to get top-notch technology. The camera has an ultra-wide lens system, and comes in a manageable hardware package. So you can ride with it pretty much anywhere, and capture the entire world around you. [mepr-show if=”rule: 7967″]

This 360-degree action camera has more than just good picture quality – it keeps up with the momentum of the moment. To hit record, there’s a massive switch on the one side of the camera. So it’s very easy reach, and convenient in sticky situations. Once you’ve flicked the record switch, the 5.7K/30-frame per second lenses join the party in capturing all the picturesque moments. However, the 5.7K video quality only works with non in-camera stitching. If you want in-camera stitching of the 360 image (which we recommend), then you can set it to record in 4K, which is still razor sharp video quality.

That’s the lowdown of the basic operations of the camera in terms of video quality. There is a 16:9 screen setting on the camera, however you sacrifice a little video stabilization. Our finding, is that if you want to record a 16:9 lens angle, and would like more image stabilization; you simply need to record your footage in the 360-degree mode, and then edit it in the VIRB app or desktop software. Garmin’s very own editing tool, is simple to understand, and it’s pretty much effortless to create your own 16:9 clip with stabilization. The stabilization itself, is very much on par with GoPro’s standard.

On the trail, the Garmin VIRB 360 was a mind-blowing action camera, and GPS tracker, all in one. While we recorded our epic footage the camera also took note of metrics; like speed, altitude, GPS and direction. These are label by Garmin as G-Metrix, and are really nice to have when putting your adrenalin-filled, MTB trail, film together. You can choose which ones you want to display in your video through the VIRB editing app.

In terms of hardware, while riding, we really appreciated the compact cube shape of the camera. It was easy to slide in and out of our back pockets, as well as easy to mount. Sure it’s not the smallest action camera out there, but you need to remember that it’s a 360-degree one. Meaning it has two lenses and apertures, rather than just one. With that being said, we did feel like the camera is little more fragile, due to the bulged out lenses. If we accidentally dropped the camera, the body would be fine. But what about the lenses?! Luckily replacements are fairly cheap, and easy to get hold off.

No matter where we placed the camera to record footage, we always got goo sound. This is thanks to micro-phones placed on all four sides of the camera. Ensuring we got full 360-degree sound. Garmin also engineered the VIRB 360 to be sensitive to your voice. And when we say sensitive, we mean really sensitive! The voice commands with which the camera is programed to respond, are very generic, but definitely work! There were a few times that used the voice control, and it worked great. It’s just if you’re experiencing a lot of wind where you’re riding, that the camera may not pick up your voice.

So while we’re on the topic of action cameras, we might as well let you know about our favourite places to mount the VIRB 360.

If you really think about it, Garmin have done an impressive thing with the VIRB 360. I mean they’ve created a compact, and functional 360-degree action camera! Technology should never be taken for granted. The image quality Garmin managed to pack into this small camera deserves an Oscar-Award. And let’s not forget about the fact that its spot-on for mountain biking.