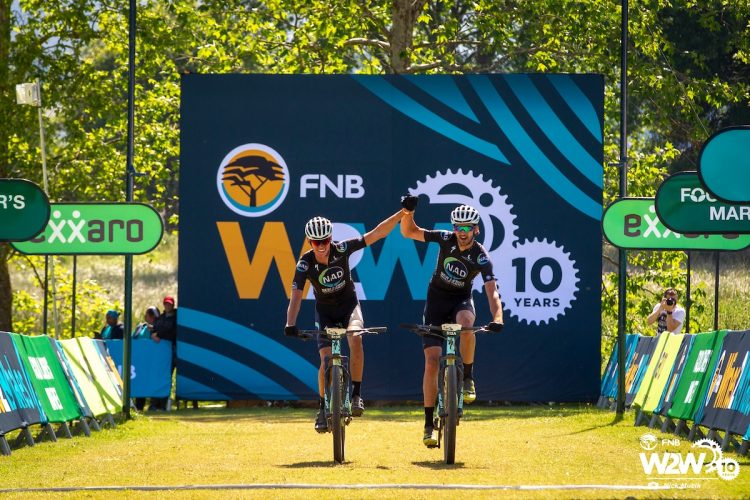 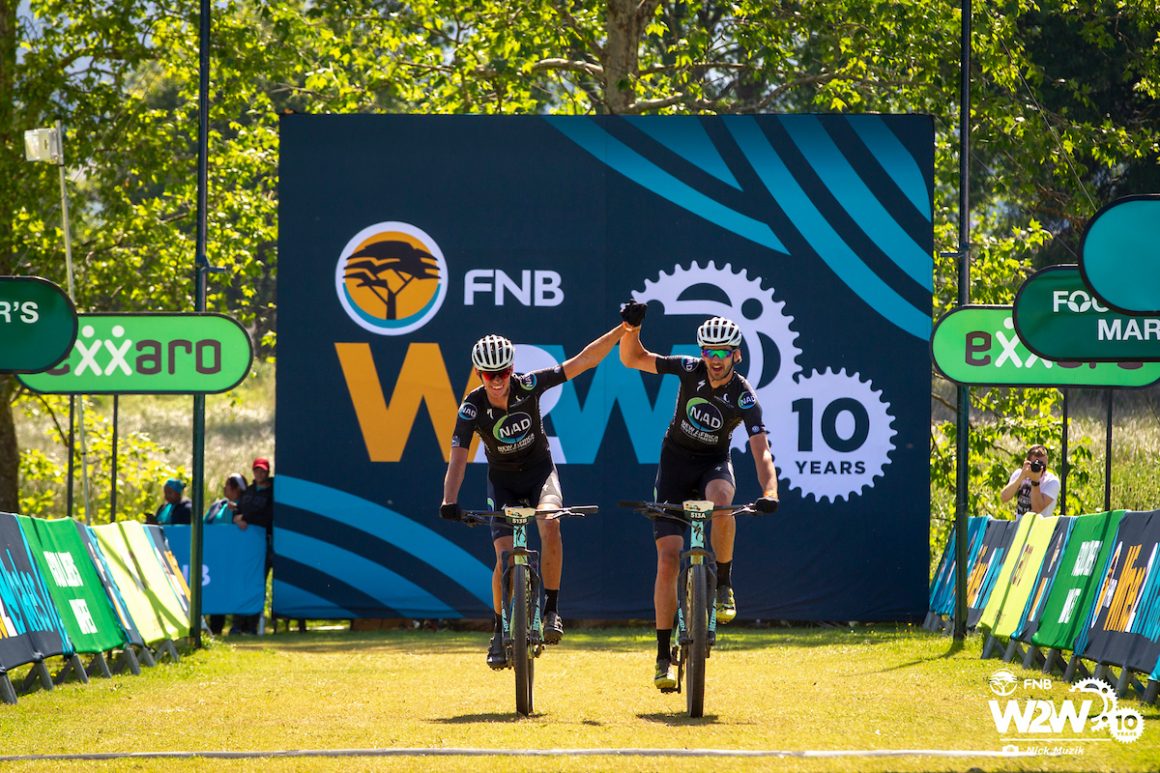 A day of incident-filled racing ended with South African duo Matt Beers and Wessel Botha (Team NAD) overcoming two punctures to finish Stage 1 of the FNB Wines2Whales Shiraz with a healthy lead of nearly three minutes.
Beers and his 19-year-old partner had to chase back and catch Under-23 cross country world champion Alan Hatherly of South Africa and his Danish teammate, former Junior World Champion Simon Andreassen (Spur Specialized), over the last quarter of the 67km mountain bike course.
Beers said afterwards that he had flatted on a section of gravel road about halfway through the ride and before the compulsory portage of more than a kilometre up the Gantouw Pass. “We plugged it and got back to Alan and Simon on the portage, but just before the tech zone (at Water Point 3 on 50km) the plug came out again.”
At the tech zone they swopped Beers’ wheel and began chasing after Hatherly and Andreassen, who had left the water point nearly a minute-and-a-half ahead.

“We saw them in the distance and I could see that Alan’s lights were going out,” said Beers. The lanky South African said “Alan never ever rides second” but was following Andreassen through the trails and falling back – a sure sign that he was in trouble.
“I also know that he comes alive again after about 10 minutes so I said to Wessel ‘we must go now’.”
Hatherly was struggling with a “sugar low” and said that Andreassen was “very patient when the lights went out”.
“I felt good on the portage up Gantouw Pass. I trained for it so the run was not that bad, but I think the headwind on the A2Z (trails immediately after the pass) got the best of me.”
Beers and Botha pushed hard for the finish and the youngster said afterwards: “When Matt said we had to go I had to dig deep, but fortunately we got away.”
They swept across the line in 2hr 56min with Hatherly and Andreassen 2min and 56 seconds behind them.
“We just had to work through (the bad patch) to minimise damage. I came back a couple of kilometres from the end,”said Hatherly afterwards.
Andreassen said he had struggled a little bit with the pace early on after a long season but then got into his rhythm. “The trails were really cool … I like loose corners and sandy stuff,” said the Dane.

Riders had to overcome a strong headwind and some dusty conditions, but all were complimentary about the course and the trails.
It was a good day for NAD, with their second team of Nico Bell and Gawie Combrinck coming home third 6 mins 24 secs behind the leaders.
“I struggled up the first climb but from there it was better,” said Combrinck. “I’m really happy that Matt and Wessel took the win today.”
Arno du Toit and Tim Hammond (SPOT Africa) finished fourth, eight minutes behind the leaders and Belgian mountain biker Frans Claes and road rider Jasper Stuyven – who finished fifth at the Paris Roubaix classic this year– another 16 seconds back in fifth.
“I was quite ill two weeks ago,” said Claes. “Today I still felt it and in the second half I was nearly dying.” He added that Stuyven, not being a mountain biker, struggled a bit on the trails: “On the singletracks we lost a few seconds and had to fight back, which also made it tough.”
The relatively short and fast stages on the FNB Wines2Whales mean that it is unlikely the leading two teams will be caught. However, Saturday’s Stage 2 around Grabouw and Elgin should suit the cross country skills of Hatherly and Andreassen and give them an opportunity to close the gap on the leaders before Sunday’s final stage to Hermanus.
As Hatherly said at the finish: “There’s still two days of racing … it’s not over until it is over.”
FNB Wines2Whales Results | Shiraz General Classification after Stage 1:
1 Team NAD (Matthew Beers, Wessel Botha) 2:56.01,2
2 Spur Specialized (Alan Hatherly, Simon Andreassen) 2:58.56,9
3 Team NAD 2 (Nico Bell, Gawie Combrinck) 3:02.25,6
4 SPOT Africa (Arrno du Toit, Timothy Hammond) 3:03.59,3
5 Waypoint Leuven (Frans Claes, Jasper Stuyven) 3:04.17,6
Source: FNB Wines2Whales