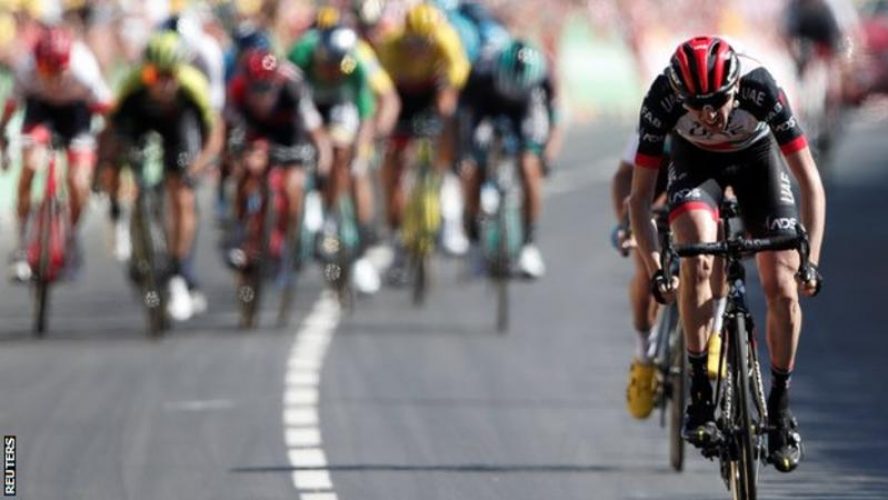 Birmingham-born Martin went with a kilometre to go on the final climb and held off the late challenge of Pierre Roger Latour by a second.

Team Sky’s Geraint Thomas was part of a group three seconds behind but climbed to second overall after securing two bonus seconds during the stage.

Chris Froome was eight seconds back and Tom Dumoulin nearly a minute behind.

The Dutchman had to have a front wheel change just over 5km from the finish and chased desperately with the help of team-mates to try to limit the damage – only to be handed a 20-second penalty for drafting behind a team car.

Britain’s Adam Yates finished sixth on the day in the pack three seconds back, and has vaulted above Froome in the overall standings.

The pair are 13th and 14th, one minute two seconds behind yellow jersey Greg van Avermaet, and 21 seconds ahead of Dumoulin.

The stage, which finished with a second ascent of the category-three Mur de Bretagne, delivered the dramatic climax that the organisers had hoped for.

Martin’s surge for the line was decisive as he secured his second stage win in the Tour, five years after his maiden success in the Pyreenes.

“It is great to get a win after so many second places since the last one,” said the 31-year-old.

“I wasn’t sure because of the crosswinds, but I had no team-mates and I thought I would have a go.

“The legs were there though – maybe it was adrenaline – and luckily it worked out.”