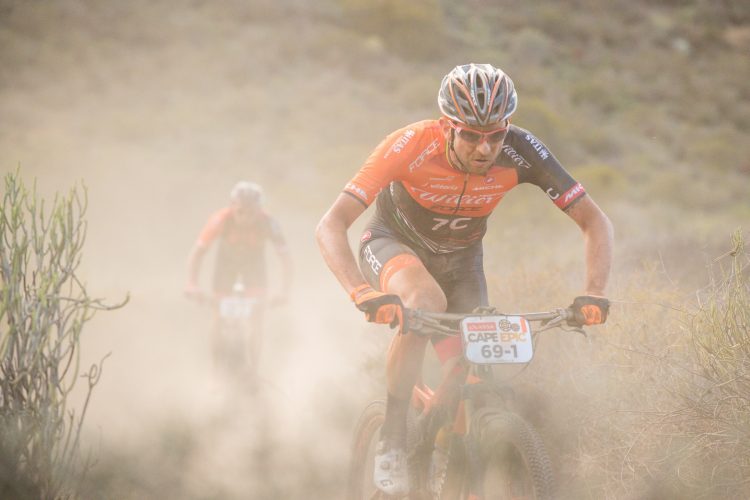 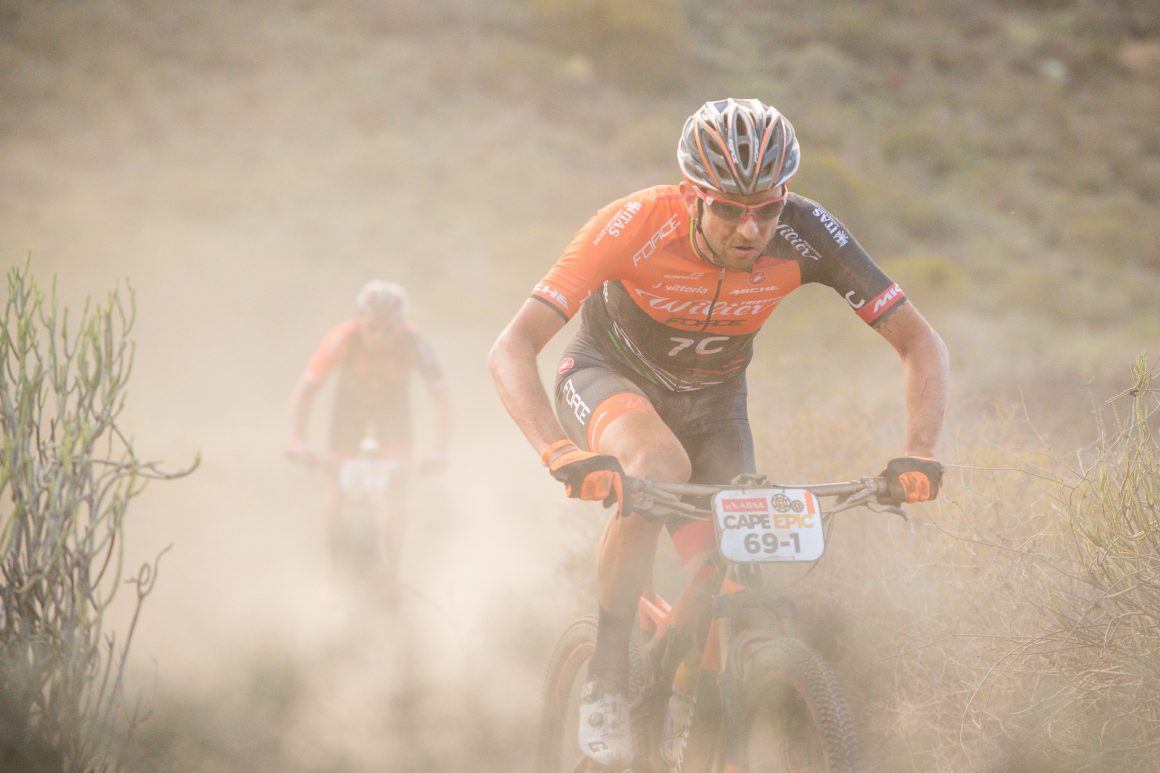 Massimo Debertolis is not only the defending Dimension Data Master’s Category champion. He won a stage and finished fifth overall in the 2008 Absa Cape Epic too; after, four years earlier, becoming the first Italian to win a World Marathon Title. It is not often that a rider with his stature is overshadowed in a non-UCI category team – but his partner, Dax Jaikel, is a truly remarkable rider.

The 7C WILIER rider, who hails from Costa Rica, was hit by a truck while on a bicycle ride in 2003. The doctors who worked miracles to save his life were unable to save Jaikel’s leg. Drawing inspiration from his wife, Adriana, their daughter, and the IndyCar champion Alex Zanardi, Jaikel has gone on to represent his nation in the Paralympic Games and to compete against abled bodied athletes in some of the world’s toughest mountain bike stage races. Alongside Debertolis, Jaikel has won and defended the BIKE Transalp master’s category in the last two editions of the race.

Jaikel is under no illusions of just how difficult the Absa Cape Epic will be. “I started training for the Absa Cape Epic specifically in the first days of October already” he revealed. “I have focused more on technical uphill and downhill than normal. Due to my amputation this specific terrain is a little bit more challenging; I would prefer to climb non-technical ascents all day. It is the terrain I feel most comfortable at, so I truly hope I can compensate for some of the technical deficiency with some good climbing skills,” Jaikel explained.

Adding his opinion to that of his teammate’s, Debertolis added: “I think that certainly if we look at our characteristics a greater amount of ascent can be better for us; even if my previous experiences at Absa Cape Epic makes me think that it is not the amount of climbing that can make the difference, but the technicality of the surfaces found on the climbs!”

With the 2019 Absa Cape Epic’s route featuring days dominated by technical climbs – like Stages 1, 2, 6 and 7 in particular – and others where the surfaces are by-in-large better, there is a healthy mix of conditions to suit and challenge the 7C WILIER team. The pair’s experience of racing together and their focus on maintaining an excellent team spirit could therefore play a key role; as could Debertolis’ experience of overcoming adversity on his way to victory in the Dimension Data Master’s Category in 2018. “I had problems in my body and we lost lots of time, and we also did not have much luck early on with punctures. But my partner Ondrej [Fojtik] was very strong and the last three stages were super,” the Italian remembered from last year.

“Massimo [Debertolis] and I have raced together for three years now, including completing several stage races with good results” Jaikel mused, mulling over their chances for 2019. “This race though is one of a kind; a top five result would be outstanding due to the super high level of competitors. The Dimension Data Master’s competition is filled with former road and mountain biking professionals! But despite that we will always aim for the stars!”

Debertolis is less concerned as to who they will be up against, though he knows the strengths of his former partner Fojtik. The Czech rider will be making his own category title defence bid alongside José Silva for the MITAS HEAD NEW RACE team. “As for our opponents, I’m very honest, I have not yet gone to check who, and how many” Debertolis smiled. “Our goal is to get to the Absa Cape Epic at 100%, face the path with the greatest awareness of how difficult it can be, and reach the finish line at Val de Vie without anything happening to our health. Then I am sure that our skin, as they say in Italy, will be sold very expensive!”