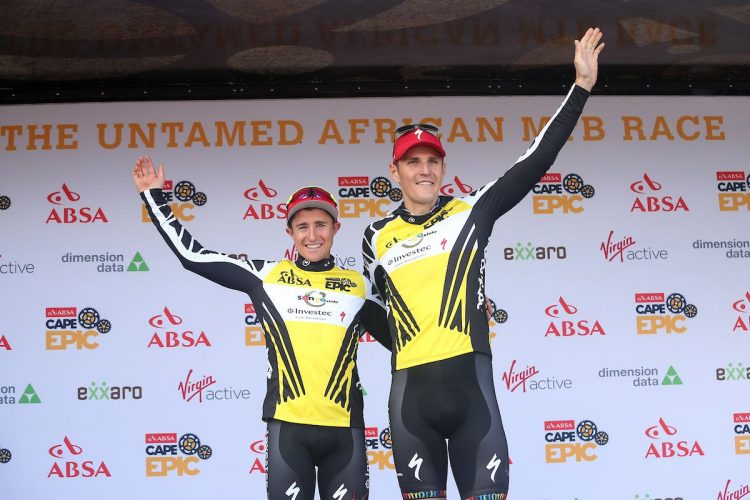 Stage 3’s transition from Robertson to Worcester might be the longest stage of this year’s race but with just 1800m of ascent spread over 122km, it is also the flattest. Ideal conditions then for the turbodiesel-powered weapons like Jaroslav Kulhavy (Investec Songo Specialized) and the marathon maestros, Alban Lakata and Kristian Hynek (Canyon Topeak). Despite yesterday’s gruelling puncture-induced efforts – in which Howard Grotts took tremendous strain chasing back the leaders – it was Investec Songo Specialized who piled on the pressure by driving the pace.

Canyon Topeak proved their early intentions by nabbing the Dimension Data Hotspot ahead of Centurion Vaude. As leaders approached the base of the Pieter’s Express climb, Investec Songo Specialized attacked in what would prove to be the move of the day. Only Canyon Topeak had enough in reserves to board the Czech Express and secure a one-way ticket to HTS Drostdy in Worcester.

“We got the win at the Dimension Data Hotspot and after that we just kept on going. Luckily we had Jaro (Kulhavy) on our side – he’s like a locomotive,” said Lakata.

The breakaway was firmly established at the 29km marker where Investec Songo Specialized gained the virtual lead with a 2.24,4 advantage over the yellow jersey group. The strategy of forcing an early split had paid off and, with Kulhavy and Lakata among the firepower, the average speed at the head of the race reached a staggering 28km/h. Further back Cannondale Factory Racing found themselves surrounded by Buff Scott MTB, Trek Selle San Marco 1, Centurion Vaude, BULLS 2 and KMC EKOÏ SRSuntour.

“It was pretty rough out there. At 122km, it’s the longest stage of the Absa Cape Epic and the guys from Investec Songo Specialized and Canyon Topeak made their move on the first climb and put us in the hurt box,” said Fumic.

Like yesterday, Investec Songo Specialized’s efforts were thwarted by a series of costly punctures that gave Canyon Topeak the lead. As he showed yesterday, when it comes to chasing, Jarsoslav Kulhavy knows only one speed – full gas. With Grotts in tow the two reduced the gap in a matter of minutes and moved through the Land Rover Technical Terrain together with Canyon Topeak.

With just 15km left to negotiate Howard Grotts got caught out by a sandy stretch that would ultimately gift Canyon Topeak their first stage win of the 2018 Absa Cape Epic – Lakata’s first since 2010.

“It’s insane. How crazy was that? It is really cool to win the stage and I was enjoying it the whole day,” said Lakata.

Lakata went on to praise Kulhavy for his incredible power and the huge efforts he put in on the flats. “We are lucky we had him (Jaro) on our side today, he did 80 per cent of the work. They (Investec Songo Specialzied) had some flats and Howie (Grotts) was struggling so we got the stage win. We are back in the game.”

Despite finishing just over a minute behind Canyon Topeak, Kulhavy and Grotts  were able to steal the yellow jersey away from Cannondale Factory Racing. Grotts, who will become the first American to wear yellow at the Absa Cape Epic, had the following to say about how things played out.

“It was a good stage and we tried to go for it, said Grotts. “I was suffering like a dog out there. It is probably the most I have ever suffered in any race but it was worth it – we are also in yellow so that’s great.”

For Cannondale Factory Racing it was a day of damage control as Fumic and Avancini began a chase back of their own after leaving the Buff Scott MTB team behind on the Land Rover Technical Terrain. The strategy of forcing an early split had paid off and, with Kulhavy and Lakata among the firepower, the average speed had reached a staggering 28km/h. Their efforts almost paid off but it was a case of too little too late as they dropped to second overall on the general classification.

“We were trying to ride smartly in the chasing bunch and made a move on the Land Rover Technical Terrain, said Fumic. We kept going and time-trialled it to the finish line but it was too late. It’s still a long way to the finish but we are happy.

“The yellow jersey always feels a little heavy because there is lots of pressure and expectation. Tomorrow looks like it could be a good stage for us with lots of single-track so we will try and put the others in the hurt box.”

The composure shown by Canyon Topeak and the consistent manner in which they’ve approached the race thus far has paid off in a big way. As it stands it’s Investec Songo Specialized who lead Cannondale Factory Racing by 2.12,7 with Canyon Topeak in third, 3.14,4 off the pace.

“The battle is on for sure,” said Marais. “Matthys (Beukes) and Julian (Jessop) are riding really strong and today we struggled a bit but we’re happy we still have the red jersey.”