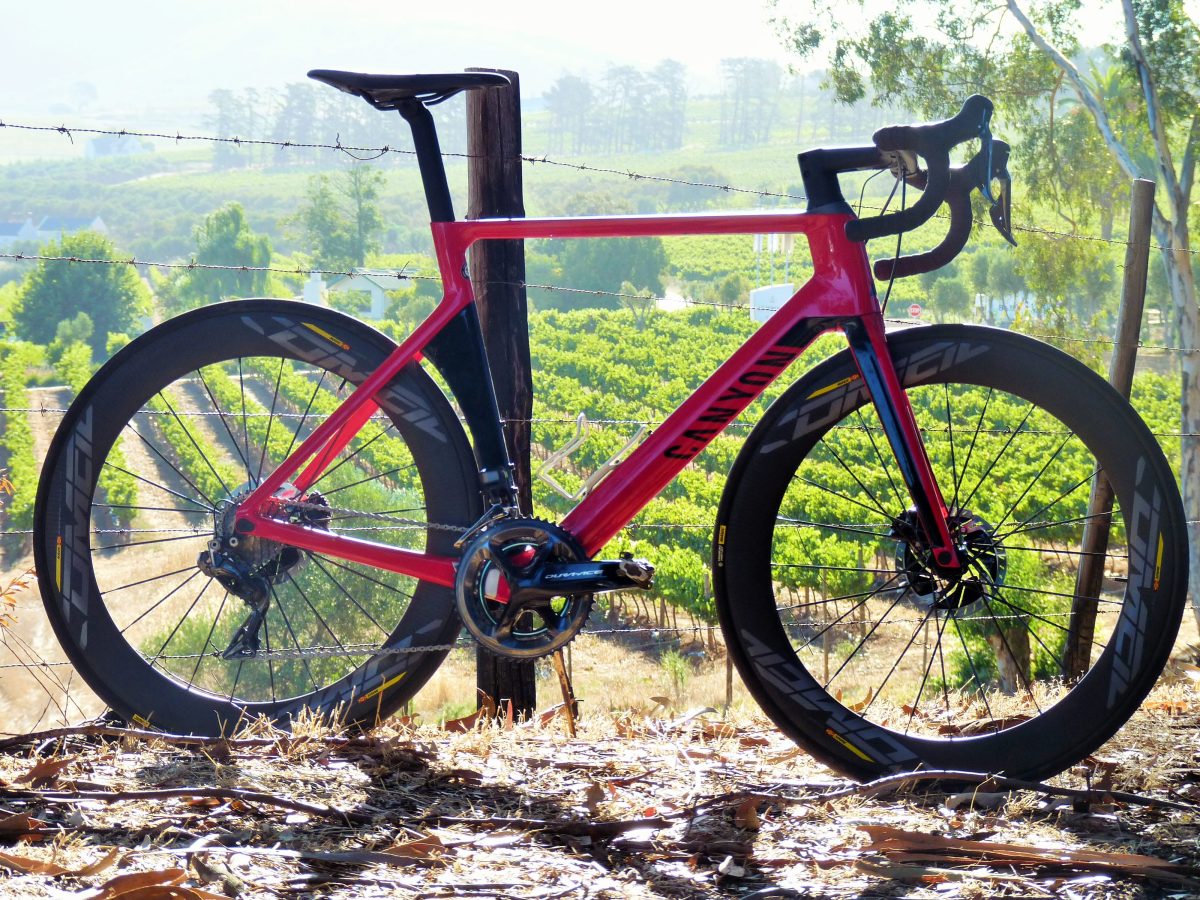 It’s very seldom that we use the word the ‘fast’ in a review title. I mean, generally speaking, how fast a bike is; is a matter of perspective.  And since every perspective is unique, its often difficult to remain objective, and not to succumb to a bike, like the Aeroad’s, seductive stance. However, we came to the conclusion that no matter what perspective you have; whether you’re staring it head-on or piloting it along with your cheeks blown back, every buyer of this bike will agree that it’s on another level of speed and aesthetics all together.

It’ll take physicists some time to figure out which level, but in the meantime the bike’s German creators have superseded, or should I say “super-speeded” all concepts of bicycle design. They’ve pulled together their knowledge from endurance road bikes, and dedicated studies into aerodynamics, to build the Aeroad. It’s different in its riding abilities, because it has been designed differently.

This Canyon Aeroad CF SLX Disc 9.0 Di2 model, is a bike that’s not only meant for aero aspirations in racing format, but one that has great agility as a low-down all-round road bike. It impressed us, and then impressed us some more. And every time we’d hear that ping of a new personal best on Strava. So as you can imagine we’re super stoked to share our thoughts on this blur of a bike.

The Aeroad CF SLX frame has unmissable diamond glare, with regards to its aesthetics. The cherry pepper red colouring is also a nice touch, however a black colour is also available. With a carbon fibre construction, Canyon has engineered the frame to contain massive amounts of stiffness in the downtube, bottom-bracket and head-tube. Germany’s finest, have even taken the liberty in measuring the amount of stiffness, and then have used it as a key selling point for the Aeroad. 100 Nm of force in the head-tube, and 70 Nm of force in the bottom-bracket.

Applying all that stiffness to a 980-gram frame, was certainly no child’s play. But this is Canyon that we are talking about here, and with this brand anything seems to be possible. Even flat disc brake calliper mounts on the frame, which neatens up the air flow around the tubes of the frame. Speaking of aerodynamics, Canyon have also pieced this bike together with a wing-shaped carbon dropper handlebars, and sharp aero seat-post. That all, once again, have great levels of stiffness thanks to the brand’s unique carbon lay-up.

The Shimano Di2 DuraAce 2×11 drivetrain deserves its time in the spotlight. We had absolutely no complaints about this gear setup, and electronic shifting integration. The bike’s rear derailleur has been made with a carbon fibre cage for lightweight purposes, while being operated and directed by a small, bite-size, motor. The motor obviously gets its command from the electronic shifters up above. Which in fact feel like buttons that you’re clicking whenever you shift gears. In terms of battery life; we never had to charge it for the entire duration of our test. (Which was about 14 days) So it lasts pretty long, and the battery itself is tucked away, under the stem part of the handlebar, in a groove in the carbon construction. Electronic shifting as experienced on this model of the Canyon Aeroad, is quick and effortless. Definitely the future of bicycle drivetrains!

The air-slicing, discs, responsible for keeping the bike rolling fast, are none-other than Mavic’s Comete PRO Carbon wheelset. It’s rim shape has been carefully crafted to mimic that of a proper aerofoil. This shape has also had its perks in terms of stiffness, along with its 26mm outer rim width. Another major feature on the wheels, were the 25mm Mavic Yksion. Which in can save the day on long rides thanks to it being tubeless ready. Then to give an idea of just how much these fast-boys weight, we put it on a scale and clocked in at 1650grams for the entire set. That’s excluding the cassette though.

The art of designing and building a road bike is making sure it can climb well, and not feel like a limp noodle. In fact, this art is something Canyon have sketched quite well, as the Aeroad handled even the steepest of climbs, elegantly. It definitely impressed us considering the bike is designed to be aero in all aspects, yet hasn’t thrown in the towel in terms climbing agility. This responsiveness inevitably comes as a result of the bike’s 73-degree head angle.

Round about now you’re probably wondering how the bike performed on flat sections of the tarmac. At least 70% of the time on these sections we rode in heavy Cape Town wind. And to keep things simple, the Aeroad wasn’t swayed whatsoever. In its wing-like design, the handlebars also played a massive role in the fight against the wind. It’s all cutting edge really! There wasn’t one thing that we would have changed on the bike’s aerodynamic side.

Descends were the best place to get low on the bike’s dropper bars, and honestly we felt like we could take on a sports car and come off as the best! With smiles all the way, the Aeroad drifted weightlessly downwards, while smoothly flowing around U bends along the path to the nearest coffee station. Only tapping the effortless hydraulic brakes when they were needed.

The ride was truly magnificent! The tech was flawless! The speed was remarkable. We believe the Germans responsible for the Aeroad deserve a fair round of applause. At USD 6239 you’ve got to ask yourself whether you’re just paying for flipp’n good road bike looks with the Aeroad CF SLX 9.0 DI2?! Well, technically no! You’re paying for flipp’n good aerodynamics, with a scent of long-enduring rider support. Matching the bike up to other in its category, its stands out as a work of art. And one that allows you to reflect upon the truth of road biking at an astronomical speed.