Blog: A Glimpse of the Epic – With Land Rover! 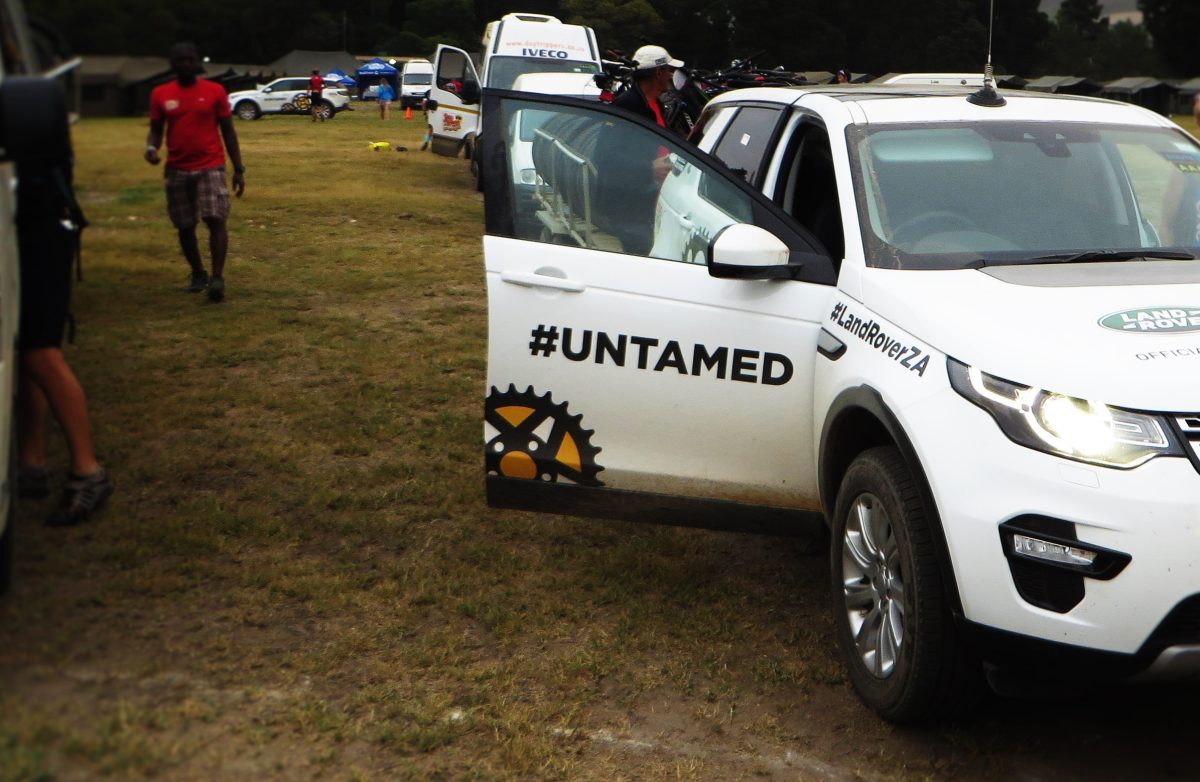 In the background of Africa’s Untamed MTB Stage Race, runs a campaign sponsored by Land Rover SA, that gives a group of 50 lucky individuals, that are selected, the chance to experience the Epic from a different perspective.

A month before the ABSA Cape Epic would fire the start gun; we received an email from Land Rover SA. The email contained an invitation to be a part of their Epic Day Trippers experience. Without any hesitation, we replied: “Yes, we’d love too!”. Thus, began our adventure!

So the day arrived; we packed our bags and climbed aboard the shuttle. We were headed for Greyton, with the unique sense of optimism and excitement in the air, despite the temperature being at 36 degrees Celsius!

We arrived at our camp site at 12:30, which happened to be the hottest time of the day, blistering at 39 degrees Celsius!!! When we had checked into our glamping tents, and were about to head for lunch at the ABSA Hospitality tent, we got the news that the day’s stage had been shortened to 70kays. Due to the extreme heat, rider’s health was at risk; which explains why we saw so many medics hurrying about doing their indispensable jobs!

After lunch, we hung around at the ABSA Hospitality tent, and got to mingle and chat with Craig Joubert – International Rugby Referee. We got onto all sorts of topics, as it seems, it started with cycling and ended up with home-schooling. Plus, we learned that Land Rover’s Operations Director was joining us for the trip, which inevitably led to some intriguing conversations over the next two days.

At around 4pm we were shuttled back to the glamping site, where we attended a trail-side mechanics course in preparation for the next day’s 60km ride…

Before the day ended though, we were met with another surprise! During the evening’s supper, Le Tour de France legend, Cadel Evans and his team-mate George Hincapie, joined us and shared a bit about their Epic experience thus-far! Evans was particularly fascinated with the South African MTB routes and both were just happy to be racing in such a magnificent event. So day one ended with a memorable occasion and some good wine! Now for day 2!!!

Our day started at 5 AM when we were met with a scrumptious breakfast. Then we set off on our bikes for the famous UFO climb, which turned out to be extremely rocky. Our technical skills for navigating through this battle field, were tested and then tested again; I’m pretty sure I wasn’t the only one feeling like I’d rather be abducted by aliens than carry on up this climb! However, we made it to the top, all in one piece, where we had our first water-point.

We then went on in pursuit of our lunch stop in Greyton. I’ll admit, I was looking forward to getting off the bike after 57km and a clumsy fall where I tasted Cape Epic dust for real!

Whoever organised this trip really went all-out; lunch starters were fish and chips, and then for the main course we could pick and choose what we wanted from the buffet, and then to top it all off, ice-cream. So in the end we were well rewarded for our riding efforts on the 57 km route and the of 1200 m climbing!

We then made our way back to the glamping-site, where we took a shower and went for a much needed massage for the aching legs. To our delight, supper that night, was at the Race Village, where we attended the prize giving for the day’s stage, courtesy of Land Rover!

“I was seated behind Cadel Evans and next to Martin Dreyer. We started up a conversation about his development team from Kwazulu Natal – but with interruptions from fan photo sessions, we decided to exchange phone numbers, to continue our chat at a later stage.”

After that we called it a day, and hit the sack! #tired

“We were up at 5:30 am to pack our bags as this would be the final day of our Epic Adventure. While the arrangement was to go for another 60 odd kilometre ride to Oak Valley, Elgin; my knee was hurting from the previous day’s fall, so I chose to sit this ride out.

On the up side though, I got to ride in a Land Rover Discovery Sport for some of the time while waiting for the riders to get back from the ride. Second HIGH-LIGHT of the trip for sure; those rocks and obstacles never stood a chance against the might of the Land Rover!”

We then got to water point one of stage 4, and I remember seeing Nino Schurter and his SCOTT-SRAM Team mates, machining gunning it up there! Wow! Those guys… just…Wow!

From there we went back to the Race Village for lunch, a shower, and then departed for home at 3 PM on the shuttle.

I remember thinking, that I won’t forget this experience anytime soon! Thank you Land Rover!!!

“If I had to pick a highlight, it would definitely be, being able to meet Cadel Evans and George Hincapie. They just have so many stories to tell. Plus, their personalities are easily relatable.”

An event like this is really great, in our opinion. I know I had fun! You get to meet some extraordinary people and experience a glimpse of the soul of the ABSA Cape Epic. It just brings you closer to all the untamed action!