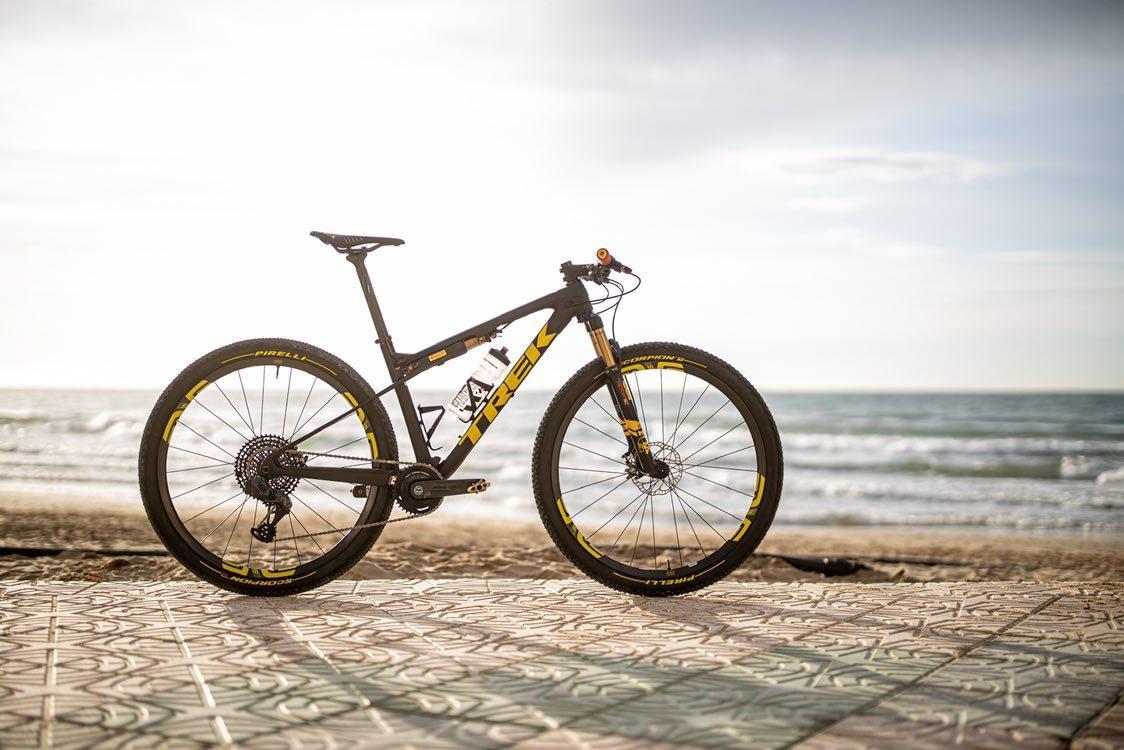 If ever the Italian stallion of cross-country, marathon mountain bike racing, was personified, it would be Damiano Ferraro. He’s faster than most, and never gives up until the job is done. Very often this job includes putting the hammer down, in well-known UCI accredited, mountain bike, stage races, such as the Cape Epic and Swiss Epic. In fact, on two occasions he has placed 3rd together with teammate Samuele Porro in the 2016 and 2019 editions of the Cape Epic. And even more recently, he claimed a whopping 5th overall standing at the 2019 Swiss Epic.

During the many miles of training that Damiano Ferraro is engaged with currently, we managed to catch up with him and take a closer look at his, drool worthy, Trek Supercaliber 9.9 Team Edition!

Damiano is based out of Leidolo in Italy, and rides for UCI XC Marathon team, Team Trek Pirelli (formerly known as Trek Selle San Marco). As you may have guessed the team is sponsored by Trek, and each team member dabbles between the Trek Supercaliber and Top Fuel as their weapons of choice.

“My Trek Supercaliber is great. She feels well balanced while being very reactive when launching back up to speed.”

The Trek Supercaliber’s punchy feel is a result of the excellently engineered OCLV carbon frame, with the IsoStrut as a rear suspension. Offering a mere 60mm of integrated travel, Damiano’s IsoStrut is made by Fox. On his race bike, it includes the brand’s Kashima Coat while on his training bike its the standard black coating.

Riding shotgun up front on Damiano’s Supercaliber, is Fox’s Factory StepCast 32 with a Kashima coat on both his training and race steed. He also has remote lock-out fitted for the rear shock and front shock, to ensure he stays focused on what matters – going faster.

Nothing but the best; SRAM’s XX1 Eagle AXS brings precision to Ferraro’s bike, through its wireless and electronic functionality. Where things get extra special though, is on his components. He makes use of an FSA Powerbox MTB crank set (including a chain-ring based power meter), which keeps track of all the watts he is putting out. This enables Damiano to train better and race smarter.

His cassette is also not entirely average. Damiano rides an INGRID 10-48t cassette which weighs in at around 323 grams! INGRID is an Italian sub-brand for  MOSCONI. They design and manufacture bike transmissions with the aim of offering a niche alternative to the big three, working on construction quality, reliability, and functionality.

The Wheels and Brakes:

For the wheels, Team Trek Pirelli uses Enve Composite’s M525 carbon wheelsets, paired up with (depending on the terrain) Pirelli’s Scorpian H and M tyre models.

The braking system Damiano makes use of on his Supercaliber, is none other than Magura’s MT8 Carbon. Which once again cements the concept of being fast at minimal weight. And in this case, being able to stop fast as possible without compromising on the bike’s overall weight😉

Some other cool components on Damiano Ferraro’s Trek Supercaliber include FSA’s K-Force model handle-bars and seat-posts. Along with a Fizik Antares R1 saddle, which completes a solid Italian build for his bike.

Special thanks to Damiano for supplying the specs and photos of his Trek Supercaliber!