Bicycling, Through The Ages 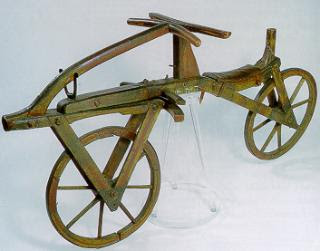 At the beginning 1800’s there was a need, a need to travel long distances in a short period of time. The first type of transport started as the bicycle. The bicycle was the beginning of an era of machine transport. We wouldn’t have cars without taking the first step which was the bicycle. I’ve taken a look at the use of the bicycle and how it looked and worked through the ages.

This is how bicycles started out. You would push yourself along with your feet as if you were riding a baby scooter. Wouldn’t it be easier to just walk, instead of having to move this bulky machine around with you which weighed 22kg! Well the bicycle had to start somewhere. The bicycle even became part of the fashion industry and  started to appear at fashion shows. But this was only the beginning.

In 1869 the recorded bicycle race takes place in Parc de St Cloud, Paris. The bicycle’s second use, as a sport. The sport becomes a big thing and in 1874 the first World Track Championship is held in England. Bicycles were now built for speed. The Tour de France is started in 1903. To me these were true, hardcore races. I take my hat off to those riders. Who didn’t have the advantages of technology. But bicycle racing declines at the start of WW1. It was then used in the war mainly for transport. Then as WW1 ended, the bicycle found its wheel’s and Track Sprinting on bicycle becomes very popular. Even though it was still used for transport, professional road racing grows rapidly and is favoured by many. But in the 1960s bicycles lose fame for transport because of the focus on cars.

Bicycling for sport becomes the emphasis and the 1970s bring variety to cycling, BMX, Triathlon, and Mountain Biking are introduced. Bicycles are used more and more for racing than for commuting. Cyclists set new records on Road bikes and Mountain bikes. With Mountain biking becoming an Olympic Discipline in 1996 alongside Track Racing, which already was a discipline at the time.

Although in 2002, commuting by bicycle becomes popular again, people still use bicycles more for racing.

I would like to see the future, will people go back to commuting by bicycle more than they do now or will bicycling remain just a sport.

So how did the bicycle look and work, from past to present? It all started in 1817 when Baron Karl Friedrich Drais von Sauerbronn from Germany patented a design for a two-wheeled steerable machine. He calls it the Draisine. In those days the bicycle or “Draisine” didn’t have any pedals so you would push it with your feet. And how uncomfortable it must have been! You could not move the front wheel to steer the Draisine. How would people do a 180 degree turn and quickly too? You would have to lean from side to side to steer it left to right. But you could not do it quickly. The Draisine’s first reported ride in 1817, June 12, did 13 kilometers in an hour. It was made out of wood and weighed 22 kilograms! It had brass wheel bearings. The wheels were made from iron and it only had a rear brake. So was this form of transport really worth all the effort it took to use it?

Draisine’s design gave birth to new ideas for the bicycle. The 1820’s t0 1850’s was an era of three and four-wheelers. People invented the tricycle and quadra-cycle. However these machines caused lots of rolling resistance because of all the wheels making it slow to move. And to crown it all, it would normally be ridden by a couple of people, like a husband and wife adding to the weight. The poor husband would do all the pedaling while his wife enjoyed the ride!

Back to the bicycle. New bicycles with cranks and pedals are designed in 1867. The bicycles were now made of steel frames and forks which reduced weight. Deferent brake mechanisims were used, but still had iron wheels. All these changes resulted in mass production. But because the pedals and cranks were on the front wheel, it was hard to pedal and steer the bike at the same time. That must have been very uncomfortable. Later rubber tyres and ball bearings were introduced.

In 1870 the first machine made entirely out of metal appeared. It was the High Wheeled Bicycle. It had solid rubber tyres and its big front wheel allowed for a smoother ride. However if the bicycle came to a sudden stop, the bike would topple forward and the rider would end up on his face. Ouch!!!

So to eliminate the tipping forward problem, manufacters now put the big wheel on the back and small wheel on the front. This bicycle was called the “High Wheeled Safety Cycle”.

However, because of metal improvement, the bicycles chain was invented. Designers went back to the original design of the bicycle, which had the two wheels at the same size. Now there was no need to put the pedals and cranks on the front wheel. This new innovation didn’t kill the “High Wheeled Bicycle’s” fame because the “Hard Tired Safety Cycle” provided an uncomfortable ride. It didn’t have the “High Wheel’s” shock absorbing spokes. No wonder it was called the “bone shaker”.

In 1880 the pneumatic tyre is invented by John Boyd Dunlop, and added to the bicycle. By the time of the first Tour de France in 1903, bicycles took the look of the racing Road Bikes we have today.

There was one problem that wouldn’t go away, though. If rider got a flat tyre, he would need a wrench to get  the wheel off the bike. He’d have to carry around a big, heavy, wrench while racing? That’s why in 1927, Tullio Campagnolo invents the quick release, which allows riders to quickly unattach the wheel without a wrench. Simply with their hands!

Tullio Campagnolo improves the bicycle by making parts, that will change the bicycle forever! He invents the derailleur gear. This helps riders shift gears, to pedal easier on uphill’s. In 1938 the 3/32 chain is invented by him also. This size chain is still used today. It will lead to advances in the derailleur too!

However just people think there are no more gadgets to add to the bicycle, BMX Triathlon and Mountain Bikes make their appearance. Manufacturers start to make bicycles for these specific sports and think of ways to improve these bicycles. Then in 1990 they do just that, by making off-road clip-less pedals for the mountain bike so that your feet would not get shaken off the pedal when going downhill. Speaking from experience this is such a useful and much needed invention. When you’re Mountain Biking you go over a lot of bumps. So to eliminate this “rattling” experience they made a suspension fork to absorb the shocks. The people asked, “But why not put a shock on the back of the bike too?” So in 1992 Full Suspension bikes are widely available. Thank goodness for suspension or Mountain Biking would be a “bone shaking” experience.

Today technology is improving the bicycle. Electronic suspension and gears are coming out. Saddles are becoming softer and more comfortable. 11 and 12 speed gears give riders a wide variety of gear choice. Metal advances caused lighter frames to be developed. From the bicycle’s first weight (22kg) to its average weight today (10kg), metal advancement is helpful, specially when going uphill. If you know what I mean.

People and manufactures have added to the bicycle over time. All these changes and improvements make it more comfortable for humans to ride. Sleeker and more versatile bikes are being manufactured. Who knows what special parts or new designs for the bicycle, the future has for us. All I can say is that bicycles are fun, and I enjoy riding them!