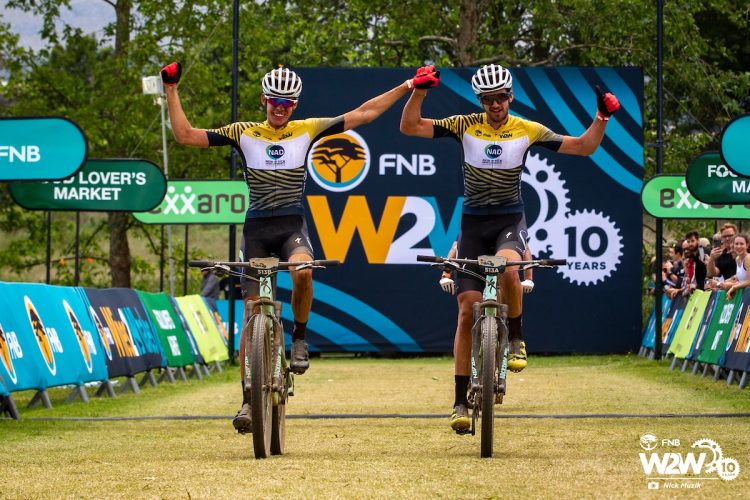 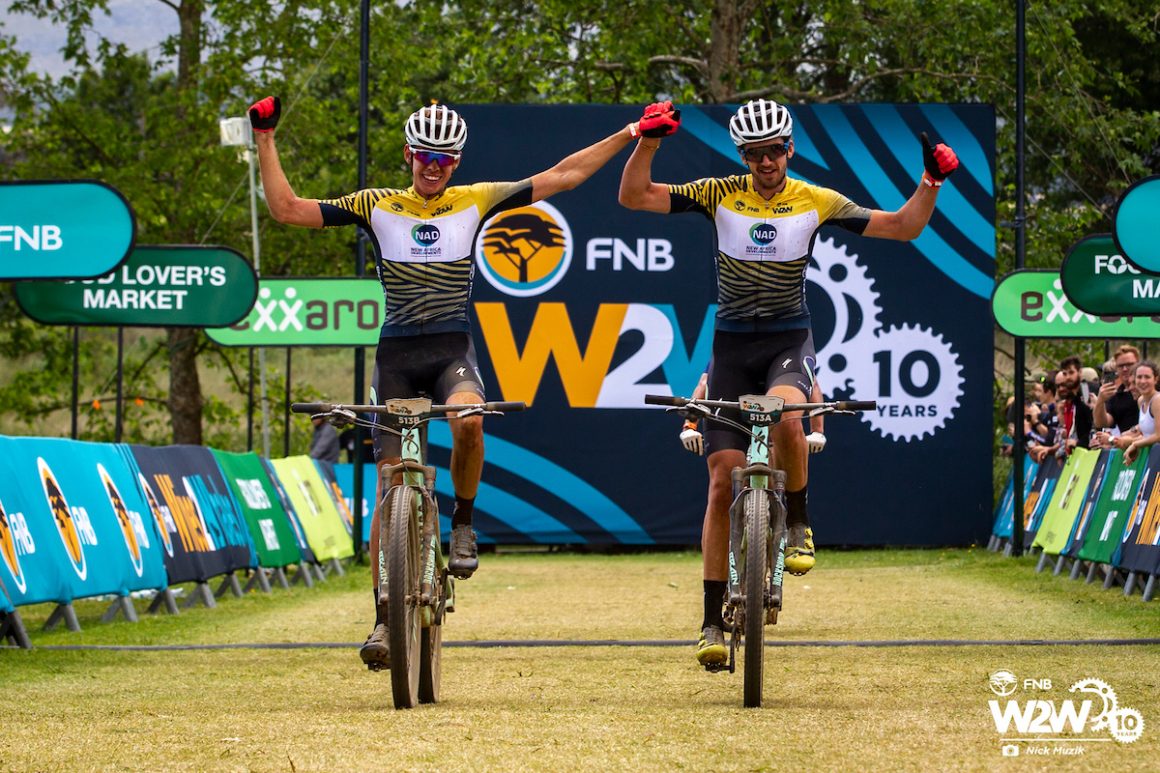 Matt Beers and Wessel Botha (NAD) won the FNB Wines2Whales Shiraz today after another drama-filled day of racing on a course that had to be rerouted overnight to avoid protests near Hermanus.

Late last night the FNB Wines2Whales organisers were instructed by emergency services in Hermanus to stay away from the town – where the race was scheduled to end – because of the protests. A road near the town had been blocked by burning tyres and rocks.

A decision was taken to hold the stage in the Elgin/Grabouw area on an out-and-back course starting and finishing at Oak Valley wine estate. The race’s route team worked through the night to plan a new course and then mark it. The stage they came up with was 56km long and was mostly held on trails in the area that had not been used in the previous two stages.

“It was a really cool course … they did really well to design it and mark it in that time,” said Botha afterwards.

The 19-year-old from Pretoria and Beers began the final stage with a 2 minutes and 54 seconds cushion. They had a setback halfway through the ride when Beers got a puncture. Their support team of Gawie Combrinck and Nico Bell (NAD 2) was with the front group “so we swopped a wheel and then it was a mad dash to get back”, said Botha.

They were helped when the front riders missed a route marker and had to turn back.

“We just all rode together from there. For the last five kays we just had to hang tight,” said Beers. After celebrating on the line in a spray of champagne, Beers said his first FNB Wines2Whales win “is such a good feeling”.

For Botha it was his first win in a major stage race and the more experienced Beers said “Wessel has been really great … our riding styles are very similar and we gelled very well”.

Hatherly had also suffered a puncture early on in the ride and chased back after plugging it. At about 40km he and Andreassen caught the front group and immediately attacked up a switchback climb.

“Then we took a wrong turn and that’s where everybody came together again,” he said.

Hatherly and Andreassen were, however, able to celebrate their second stage win in two days – they had also won Stage 2 in a sprint. Andreassen, a former junior world champion, said the course had been quite dusty and, because of the late rerouting, they had little idea what lay ahead: “But it was the same for everybody, so we’ve got no complaints.”

Second in the dash for the line were Claes and Stuyven, an accomplished road rider who finished fifth at the Paris Roubaix classic this year and who was taking part in his first mountain bike race. Stuyven said he had gone for skills training in Stellenbosch the day before the event and became more comfortable on a mountain bike as the race progressed.

“On the first day I bonked (ran out of energy) but yesterday and today were great. I enjoyed it a lot but I’ve still got a lot to learn on a mountain bike,” he added.

Bell and Beers were third in the sprint, fourth went to Calle Friberg and HB Kruger (HiQ Ellsworth) and Bell/Combrinck finished fifth. Another team celebrating their accomplishment were Dutchmen Mitchel Steenman and Matthijs Jasperse, the only riders to finish the Jereboam – all three three-day FNB Wines2Whales events (the Chardonnay, Pinotage and Shiraz).

Steenman, an Olympic rower who stands a full 2m tall, said they had enjoyed their nine days of riding and the new course today had made for  bit of a change from what they had expected. They finished the stage in 2 hours and 33 minutes, placing them a commendable 30th overall. They also won the whale category for teams in which both riders weigh more than 90kg.

“It’s an amazing feeling to have finished them all,” said Jasperse before the pair headed off for the airport and their flight back to Holland.