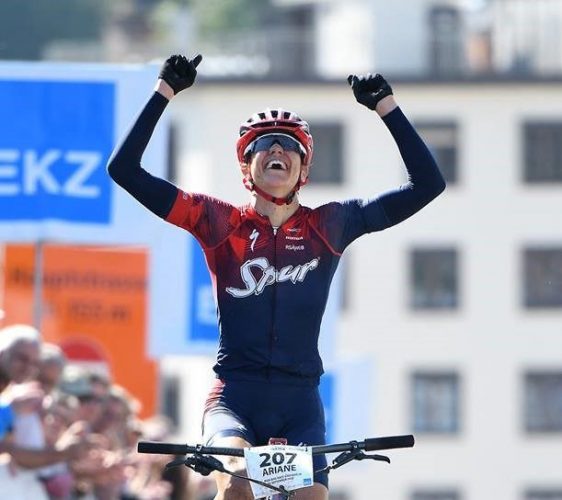 What a super September for Team Spur! Alan Hatherly earned a XCO World Championship title in the U23 category two weeks ago, while Ariane Lüthi followed it up with a sixth place at the XCM World Championships. Then, yesterday, our Swiss phenom rode to a sensational victory at the Swiss XCM Championships! Here’s how the action in Einsiedeln went down…

On Sunday morning, 30 September, Ariane lined up in Einsiedeln, Switzerland, close to the southern shores of Lake Zurich for the start of the Swiss Marathon Championships. One hundred kilometers – and over 3,700m of climbing – later, the Swiss powerhouse came home ahead of compatriot Esther Süss to reclaim her national jersey in the discipline, adding the 2018 honour to her victories in 2016 and 2013.

“I am really happy I managed to reclaim this title. I knew it would be a 50/50 battle between Esther and I… I am happy with how the race played out: my tactics, my eating plan, everything just lined up and I think I rode the race of my life today,” Ariane laughed, replaying the race in her mind late on Sunday evening.

Ariane’s 6-minute 45-second winning margin over Süss belies the brutal and tactical cat-and-mouse battle that unfolded in the valley of the Alp river on Sunday. In mountain bike-obsessed Switzerland, the opportunity to wear the fabled red-and-white cross is taken very seriously. And the country’s two most established marathon riders put everything on the line to push each other to the limit, over more than 5 hours of racing.

Leading up to the first steep climb, Ariane asserted herself at the front of the field among the men, who were also vying for the national jersey, applying pressure to her rival Süss. The early move was a tactical masterstroke that would bear fruit later in the race. “To beat Esther on a course with so much climbing I knew I had to make my move early,” an elated Ariane described after the race.

Gaps opened and closed between the two riders throughout the race, but Ariane was determined to remain on the offensive for the entire race. “I managed to get a gap on the first climb, and from there I tried to settle into my rhythm on the flat sections,” reflected Ariane. Süss fought back to close the gap with her sensational climbing skills. As she drew close to Ariane at the top of the first climb of the day, the Team Spur rider dropped through the gears and attacked the technical descent.

With plenty of climbing yet relatively non-technical descents (by Swiss standards!) Ariane ensured she made the most of the gravity-assisted sections. “I would pull a gap on every downhill which just added to the pressure for Esther to close on the flats and climbs,” Ariane said.

Each time Süss caught Ariane on the climbs, Ariane would pin her ears back and disappear into the distance on the descents. “I am actually happy to walk away in one piece,” laughed Ariane. “I really attacked all the downhills to gain as much time as possible.”

The major climb of the day came at the 74km mark. It was a Swiss wall and the Queen of the Mountain hotspot, topping out at 1771m. On the lower slopes Süss took the lead for the first time in the race. “Esther was able to overtake me on the climb, and although I could always see her, she must have had around a minute or so on me,” Ariane said. But she kept her cool, having scouted the course earlier in the week, she knew what was to come and this aided her composed chase back.

Ariane closed the gap slightly on a walking section of stairs near the summit of the QOM climb and then stalked Süss on the tricky descent once again. The gap was neutralised on a series of gravel rollers just before another technical descent, where Ariane had crashed over the handlebars during the week on a course recce. Ariane noticed that the warmer weather had dried the course out since her recce ride and decided to play all her cards. “The one rocky section was drier than earlier in the week so I decided that I would go for it and ride it,” said Ariane.

Fortune favours the brave, and Ariane’s decision to go all-in proved to be the decisive move of the day. Ariane pushed ahead on her own, and continued to pile on the pressure to cross the finish line first.

After a challenging 2017 season, where Ariane battled depression and had to overcome a slew of disappointing results, the Swiss Marathon Championship victory marks an impressive return to form in 2018 for the five-time Absa Cape Epic Champion.

Ariane now returns to her second home in Stellenbosch, South Africa, to resume her duties as a proud ambassador to the Spur Schools Mountain Bike League. The Spur League’s national grand final takes place this weekend in Magaliesburg, Gauteng and Ariane will share her experiences and insights with thousands of riders, school coaches, parents and fans.