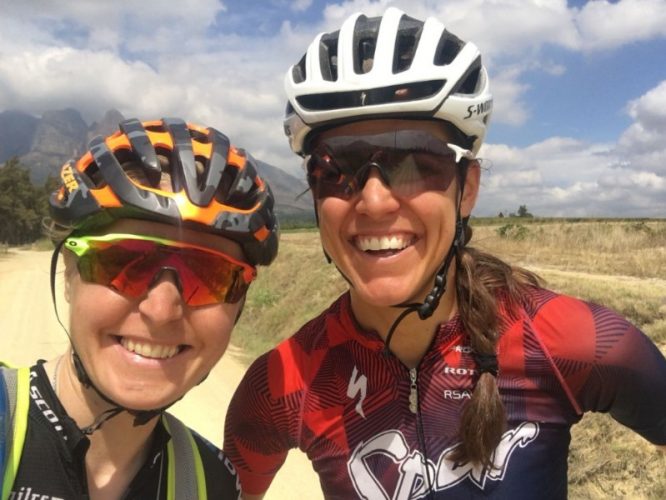 The Absa Cape Epic women’s race is wide open, shaping up to be perhaps the most exciting edition in years, this after a number of last-minute shuffles among the top teams due to the withdrawals of Jennie Stenerhag, Adelheid Morath and Bianca Haw.

Team Spur also had its share of last-minute drama when Ariane Lüthi’s original partner, Christina Kollman-Forstner, was forced to pull out due to medical complications. Fortunately Belgium’s Githa Michiels was waiting in the wings. The multiple Belgian XCO Champion and Olympian is ready for the challenge.

The two riders have spent the past week together and are starting to gel. The pairing are ready to challenge for an overall podium over the 658km race, and know a successful Prologue on Sunday on the slopes of Table Mountain, will be the frist step to realising this goal. They are under no illusions that it will be easy, however.

“It is definitely a challenge to build a new partnership on such short notice,” Ariane commented. “In terms of language, we still have to get on the same track but I’m busy learning my Flemish and she is brushing up on her English,” she joked. “I’m sure we will get around that soon enough!”

“It is Githa’s first Epic, but she understands the team dynamic and she is super strong and a tough woman. I was really lucky to find such a good substitute partner in such a short time,” she said, adding that despite all the last-minute changes the women’s field is going to be super competitive this year. “Since the separate ladies start in the past two years, the field has come much closer together and the racing has been much more exciting.”

“There is a very long list of dangerous teams,” she said, listing the likes of Investec-Songo-Specialized (Annika Langvad and Kate Courtney); Silverback-KMC (Mariska Strauss and Annie Last) and Ascendis Health (Sabine Spitz and Robyn De Groot) among many others as possible threats. “There are some very strong legs, minds and, some very skilled women racing next week. I’m really looking forward to going elbow-to-elbow with the other women, it’s going to be an exciting race.”

Ariane goes into the Epic in arguably her best form since her last victory with Langvad, after a dominant GC win at the Tour of Good Hope last week. “The form is definitely there and I feel much better than last year. I gained a lot of confidence on the road and am feeling good mentally as well as physically. But, the Epic is a highly unpredictable race and one really has to be in the best shape to compete against that kind of field.”

Githa is up to the challenge and eager to make her mark in the world of marathon stage racing. “I’m really excited for the great routes and to experience the team spirit,” she said. “I just want it to start already.”

“It’s a big honour to ride with someone like Ariane – a multiple champion!” She said. “I’m really proud to be able to ride with such an experienced partner, I hope to learn a lot from her and do my part.”

Aside from the depth of the women’s field and the technical aspects and distance of the stages, Githa believes the heat will be her biggest challenge. “That, and getting up so early every day,” she joked.

The pair are going into the eight-day race with big GC hopes and have identified Stage 4 as perhaps the biggest challenge. “I have ridden some of Stage 4’s technical sections – it’s long and tough,” Ariane said. “It also comes on the back of three very long days”

“Our goal is to go safely and consistent, and, to put in a good performance throughout the whole week,” she added. “The first four stages are going to be crucial, you just have to be in front there to be in contention for the overall.”

Team Spur wants to say a massive and heartfelt thank you to all our fans. Thank you for your support. The Absa Cape Epic is about triumph in the face of adversity and teamwork. Your faith in us, and support for us, is keenly felt and we consider everyone of you a part of our ‘team’. We hope to do you proud!

To follow the action there is live streaming on the Absa Cape Epic website. Team Spur will be following the race, and passing on any info we can via social media, so stay tuned. We will also be putting a daily race debrief together, so you can get the inside scoop as we go.