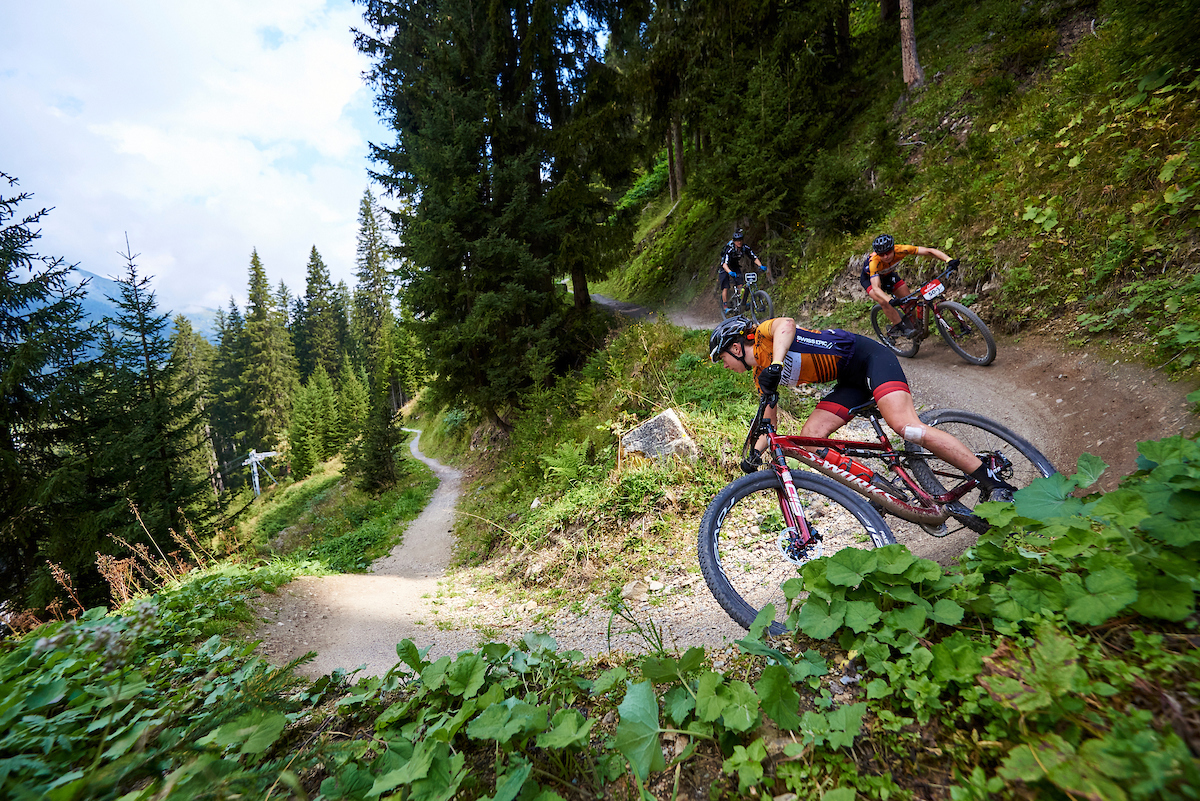 Annika Langvad transplanted the dominance Epic Series fans have become accustomed to witnessing in the Western Cape to Graubünden. She and Haley Batten put in a perfect performance, for Specialized – Racing, winning all 5 stages and the overall Swiss Epic title.

Specialized – Racing’s Annika Langvad and Haley Batten completed a clean sweep of Swiss Epic stage victories; in Davos on Saturday, 22 August. The Danish/American combination were peerless throughout the race through Graubünden, winning the overall title by 38 minutes and 19 seconds. Despite their dominance, it was no boring procession; however, their lead was challenged on each stage, including the final one.

The 61-kilometre, Stage 5, route featured a long climb from the gun. As on every long climb in the 2020 Swiss Epic, the Centurion Vaude Radon team, of Stefanie Dohrn and Elisabeth Brandau proved the strongest climbers. They reached the summit 40 seconds up on the Specialized – Racing pair. Again, they were unable to hang onto that advantage, sacrificing two places on the Panorama Trail descent.

Once Langvad and Batten were in the lead they did not look back. They were briefly joined by the Andermatt Spur team on the undulating trails between Service Stations 2 and 3. Ariane Lüthi and Alice Pirard lacked the firepower to challenge Specialized – Racing when the climbing began in earnest once again, though, leaving Langvad and Batten out front alone.

They have proved, during the Swiss Epic, that they are comfortable leading from the front. Langvad’s stage racing experience means she is adept at managing her and her partner’s energy expenditure. This meant that they never crested a climb in the red, in danger of making an avoidable error. Their calm composure allowed them to descend the Ischalp Trail into Davos, confident that they would not be caught.

Crossing the line, they secured a perfect Swiss Epic performance. 5 stage wins from 5 starts, taking Langvad’s Epic Series total stage wins to 41. Their victory margin over Andermatt Spur was 2 minutes and 3 seconds on the day. While overall they had a 38-minute buffer to Centurion Vaude Radon.

“I’m very proud of our performance here, at the Swiss Epic” Langvad noted. “We rode super smart and super smooth. We worked at getting the most out of each other’s strengths, so it’s really rewarding when that pays off. But I knew going into the stage that it’s never over until you cross the final finish line. Today, we had 2 flat tyres which made the day that bit more challenging and stressful. The first was a small pinch flat; which we couldn’t really see, right up against the rim. We just stopped and re-inflated it a few times. From about the 20-kilometre mark, where it happened, to the first tech zone (29km) I had to ride very carefully; until I could change the wheel. Alice [Pirard] and Ariane [Lüthi] were really strong today and they passed us while we were swapping the wheel. But we were able to catch and pass them again.”

That was not the end of the stress for the Specialized – Racing team, however. “Then, with about 10 kilometres to go, Haley [Batten] punctured” Langvad laughed. “Fortunately, it was a slow puncture and we were able to pump it and nurse it to the finish.”

The stressful final day did not detract from her partner’s enjoyment of the stage. “Today I tried to take it all in” Batten grinned. “To be able to share this experience and victory with Annika [Langvad] and the whole team is really special. It was epic all round!”

With the 2020 Swiss Epic completed, the mountain biking world’s attention shifts forward. One can only hope that the race in Graubünden road-mapped the path to safe and successful mass participation events within the context of the Covid-19 pandemic. This is in no small part due to the exceptional hard work of the host towns – Laax, Arosa and Davos – as well as the canton of Graubünden. “On behalf of everyone at the Swiss Epic – the crew, the volunteers and of course the riders – I’d like to express our gratitude to Graubünden, Laax, Arosa and Davos” thanked Felix Eichenberger, Managing Director of the Swiss Epic. “Organising the Swiss Epic this year has brought with it unique challenges, but with the help of our partners and the host towns, it was possible to stage a truly remarkable, world-class, event. I hope every rider thoroughly enjoyed their time in Graubünden and that they will return once again, to take part in the 2021 Swiss Epic or on a vacation to experience the other attractions this beautiful region has to offer.”

Mountain bikers can now look forward to more all-round epic experiences, though they will have to wait until 17 to 21 August 2021 for the next Swiss Epic. Next year’s race will once again take place in Graubünden, with the route details to be revealed in early 2021. Registration opens on the 9th of September; at 16:00 (CET), so mountain bikers do not have long to wait until they can start planning their next adventure.