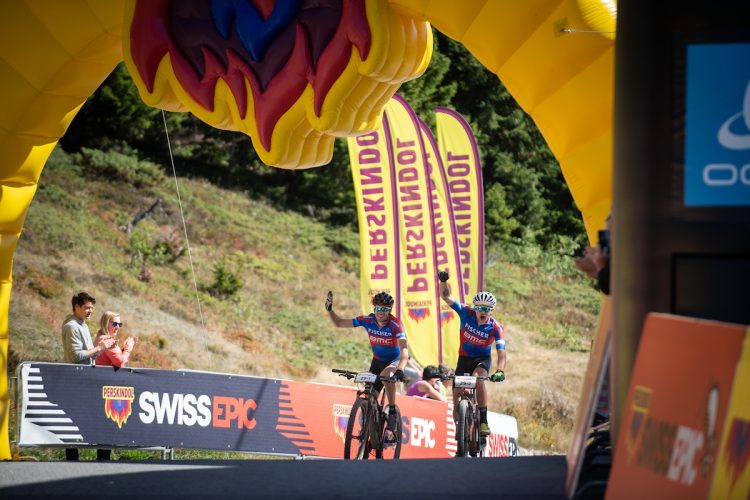 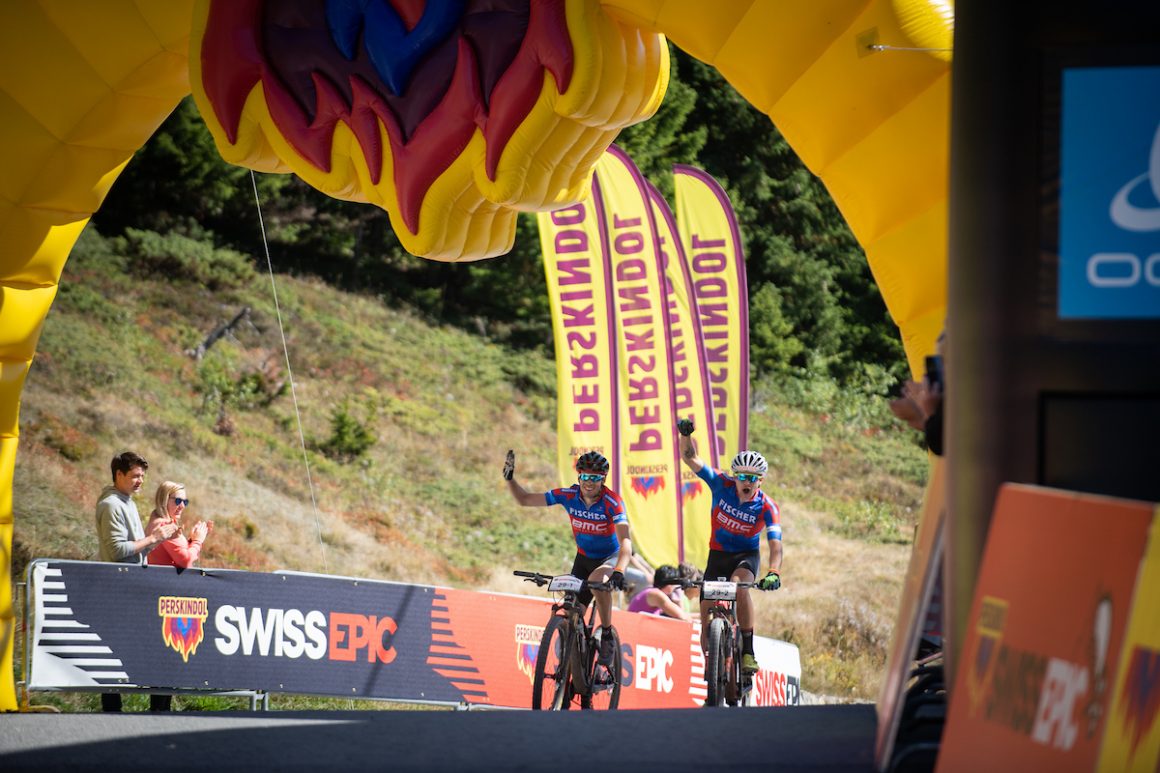 Local riders take victory in the Men’s and Women’s categories on stage one at the 2018 Perskindol Swiss Epic.
The 2018 Perskindol Swiss Epic kicked off five days of challenging yet rewarding mountain biking in Bettmeralp. This year’s edition sees riders navigate some 50 municipalities in the fairytale-like Valais region, while surrounded by jagged Alpine peaks. Riders cover 50-80km each day with 1800-2800m of climbing before arriving in Zermatt at the foot of the Matterhorn on Saturday. 334 athletes left the race village this morning under clear skies, setting off on a 63km loop, culminating in the main obstacle of the day – a tough 10km climb back up to the traditional Swiss village.
Dark horse team BMC Fischer Price struck the first blow in the men’s category, snatching victory from team Scott-SRAM. Swiss riders Martin Fanger and Noah Blöchlinger crossed the line on stage one 55 seconds ahead of Matthias Stirnemann and Andri Frischknecht.

The decisive move of the day was made early in the race with an attack on the very first rise. Scott-SRAM, BMC Fischer Price and jb Brunex Felt Factory Team’s Thomas Litscher and Max Foidl broke clear of the group. However on the fast descent from the Fiescheralp to Fiesch, bad luck struck jb Brunex Felt – Litscher sliced his tyre, which could not be repaired, forcing them out of contention.
This left BMC Fischer Price and Scott-SRAM to duel it out on the rolling terrain approaching the 10km climb. Andri Frischknecht made a big attack on the second last rise, putting Fanger in difficulty, “I did a marathon race on the weekend and my legs aren’t that good for short hard efforts, so I couldn’t follow.” That left Scott-SRAM in the lead with BMC Fischer Price fighting hard on their own in no-man’s land to stay in contention.
Aiming to maintain their advantage, Scott-SRAM hit the base of the climb hard, perhaps overextending themselves in the process. Fanger and Blöchlinger played a different game, “With some good team spirit, Noah was helping me a lot. We rode one speed and with the altitude we were a little faster near the end, and we were able to close the gap.”
By the 53km mark, BMC Fischer Price had closed in on Scott-SRAM, with Stirnemann struggling, “After the feed zone it was just suffering, I think I didn’t eat enough and in the end I had tired legs. We didn’t overdo it… it’s a long way to the finish in Zermatt.”
With their ears pinned back, BMC Fischer Price went all-in for the stage, taking line honours and the overall race lead. Scott-SRAM hung on for second and coming in third was Team BiXS after a steady effort from Konny Looser and Hansueli Stauffer. “It was a bit too fast in the beginning for us and we wanted to ride our rhythm, save energy and ride consistent – there’s four more days to go!” said Looser, the current Swiss marathon champion – his eyes set on the final prize.
In the women’s field, team Canada’s Catharine Pendrel and Haley Smith looked set to take the stage all morning, passing the checkpoints in the lead with a small margin over Team Thömus’ Alessandra Keller and Katrin Stirnemann. But their ride was not without incident. “There was a moment of inattention and I hit a rock that knocked me off the track and into a cow fence,” said the two-time world champion Pendrel at the finish line showing a scratched cheek.

during Stage 1 of the 2018 Perskindol Swiss Epic held in Bettmeralp, Valais, Switzerland on 11 September 2018. Photo by Marius Maasewerd.
PLEASE ENSURE THE APPROPRIATE CREDIT IS GIVEN TO THE PHOTOGRAPHER

The tumble did little to discourage the two-time world champion and Olympic medallist – it was the final climb that was the Canadian team’s undoing. Locals Keller and Stirnemann set a steady pace, with Pendrel and Smith in their sights all the way up. With the hare ahead, Team Thömus moved up to the Canadians and gained contact with them in time for the final technical section, where they made their move.
The Swiss riders pressed home their advantage to gain 36 seconds and take the win and the overall lead. Keller was delighted. “I have never wore a leader’s jersey before. For sure we want to keep it till the end and try our best but we want to enjoy ourselves too!” said the newly-crowned under 23 world champion.
Still very much in touch of the leaders overall, losing the stage didn’t seem to affect Pendrel’s morale, clearly enjoying the Alpine scenery,  “It’s like riding through a postcard here!”
Pendrel’s enthusiasm must have been contagious. Spirits were high in the race village, with riders visibly inspired by the landscapes and the challenge of navigating the tight and narrow trails. “I have never ridden such incredible trails before in my life anywhere – we had a ball,” says Heinrich Tait of master team Chocolate Block, from South Africa.
Tomorrow’s stage is starts as spectacularly as the stage 1 ended. Transitioning to Grächen, the ‘high road’ above the Rhone Valley sees a glimpse of the race’s final destination – the Matterhorn. This marks the start of a glorious descent to Mörel, passing the only saffron cultivation in Switzerland. At the end of the day, riders will have worked hard for their dinners, having climbed 2700m in 77km.
Source: Cape Epic Media