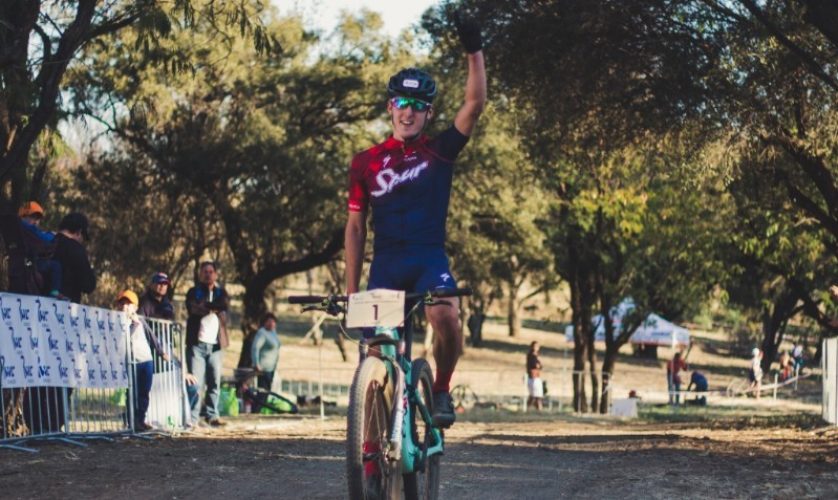 Team Spur’s Alan Hatherly secured his second South African Elite Cross-country jersey in Bloemfontein on Saturday afternoon, in his final year as a U23 rider. Electing to compete in the Elite XCO category, despite being U23, Hatherly can now proudly wear the national jersey colours when he progresses to the Elite category from the start of 2019.

Alan returned from Europe on Wednesday last week after two high-paced UCI World Cup races. Landing in Bloemfontein after his long-haul travel, Alan focused on defending his national jersey immediately, with a few longer rides to stretch out the legs.

His Team Spur support staff also had their work cut out, and were juggling baggage weight limits and excess charges from Europe to ensure everything arrived on time and in one piece. “Spare parts and tools are vital for an XCO. When you see Alan twice on a lap, it is important to have your bases covered,” Team Spur mechanic, JP Jacobs said. “Everyone needs to be a bit more flexible when we are racing for an important championship jersey out of a suitcase, en route home after a long overseas stint. Not everything goes to plan,” laughed team manager, Tim Bassingthwaighte. “But having two heads locked into the plan helps us manage the unforeseen changes, and keeps everything running smoothly.”

The Bloemfontein course at Happy Valley Conservancy is dry and rocky, but a hidden gem, found in the middle of town yet quite unknown to all but the passionate local mountain bike community. “The course was essentially the same as last year,” said Hatherly. “With just a few hundred metres cut out.”

Although a far cry from the recent Andorra World Cup, which sits at over 2000m above sea level and where Alan placed eighth, Bloemfontein’s altitude, at 1400m, would play a factor in race tactics.

“I knew it would be important to race smart from the get go,” said Hatherly. “Stuart Marais and Phil Buys set the pace out front and I let them do their thing until the first climb, where I moved past.” Hatherly then increased the pace to keep the race pressure high, with only his close friend Matt Beers and Arno du Toit able to respond. “I got a gap on my chasers – Matt and Arno,” he described.

The seven-lap race was then quickly strung out as riders came through the start-finish banner to complete the first lap. Lap-time predictions at Friday’s course practice proved to be inaccurate, with the racing producing slower than expected times. “The course was so blown out after a full day of racing all the age categories, that we ended up racing for an hour and thirty eight minutes,” Hatherly said after the race. “The climbs were loose, so traction was quite tough to come by.” 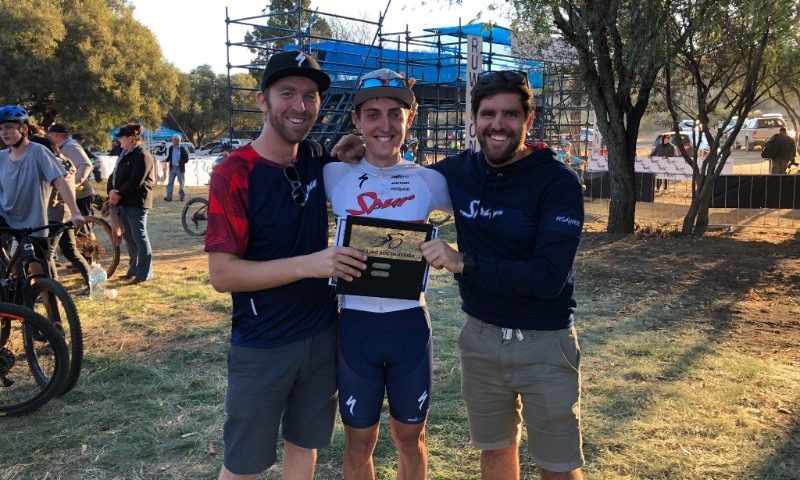 “I felt really good throughout the race, despite it being the third race weekend in a row for me, mixed in with lots of travel!” Hatherly admitted. Once Hatherly had established a gap over his chasers, he maintained a constant effort to extend his lead on each lap. After seven laps of hard racing, Hatherly finished just over three minutes ahead of his close friend, training partner and marathon specialist Matt Beers in second with third-placed Arno du Toit a minute further back.

“A big shout out to Matt for a solid ride in a format which he hasn’t had too much experience in,” said Hatherly.

“All in all I’m super stoked to renew my Elite National title, I’m looking forward to next year now. I can wear and show off my white South African jersey at the UCI World Cups in my first year in the Elite category.”

It has been a long and successful road for Alan, having started his XCO racing at the Spur Schools League in KwaZulu-Natal. “Being a Spur Schools Mountain Bike League ambassador, I think it’s important to inspire the young riders and show them that it is possible to come from the League and achieve an Elite National title.”

“It’s now time for me to shift all my focus towards the next block of World Cups and the big goal in September, the UCI U23 World Championships!”