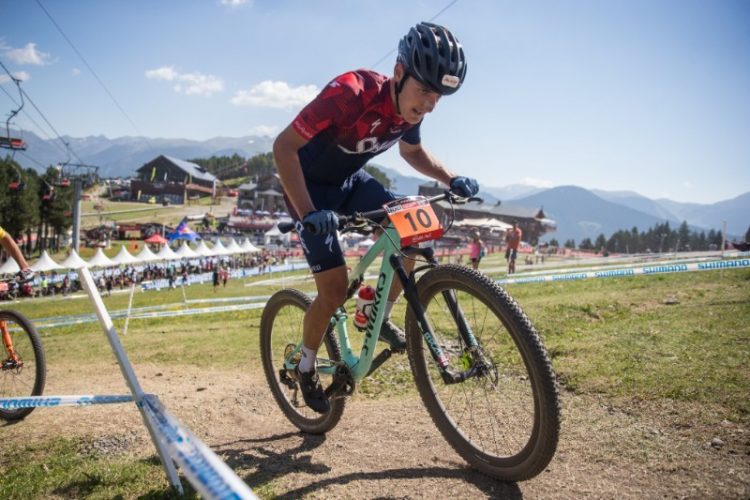 Above 2000m you struggle to summon enough oxygen into your brain to think straight. Your muscles scream and your heart pounds. Everything is an effort. Not the ideal place to host a round of the UCI XCO World Cup – one of cycling’s most intense disciplines. But it’s the same for everyone…

And so Team Spur headed to the fifth round of the 2018 UCI XCO World Cup Series, which took place in the high mountains of the Pyrenees in Andorra, on the Spanish border. The lung-busting venue is widely regarded as the toughest on the World Cup circuit, not just due to the sparse oxygen levels at 2000m above sea level, but for its steep and punchy climbs, with rocky off-camber descents. It is no mean feat to simply stay upright.

U23 rider Alan Hatherly arrived early in race week to find some significant changes to the course from previous years. The addition of an extra climbing loop straight after the start would create an intense race from the starter’s gun. “Coming straight off the start into a 90-degree turn at full gas was a bit of a puzzle for us as we sprinted for positions,” Alan reflected after the race.

A last-minute addition of a seventh lap to the U23 Men’s race suddenly required even better pacing and critical effort management.

Hatherly got off to a good start from the second row and entered the dual slalom section after the first climb in sixth place. As riders entered the back end of the course, a ‘brick wall’ climb loomed. “You have to be so careful at altitude to not overreach and go into the red,” said Alan. “As soon as you’ve gone into the red, the lack of oxygen makes it so hard for your body to recover.”

The race held together for the first lap, with riders keeping each other in check, before the eventual winner, Joshua Dubau of France, pulled off the front and soloed the remaining laps to an emphatic victory. There was a constant change of riders on the charge from behind though. As riders surged and faded, Hatherly held a constant effort and shifted between fifth and eighth place. “It’s so hard to judge other riders at altitude, you never know how the other guys are going to handle it,” said Alan.

Groups formed and broke apart, but Hatherly found himself riding his own pace between groups, helping him manage his effort. At the end of the unusually long seven-lap race, Hatherly finished in eighth place. In an unfamiliar and harsh environment that is very tough to predict, the top-10 is a fantastic achievement for Hatherly and the team.

But the fun doesn’t stop here. Team Spur is now racing across the equator to Bloemfontein to ready themselves for the South African XCO National Championships on Saturday, 21 July, where Hatherly hopes to defend his Elite XCO jersey for another year.

Team Spur will once again be covering the race live on twitter. Stay tuned from 14:15!S