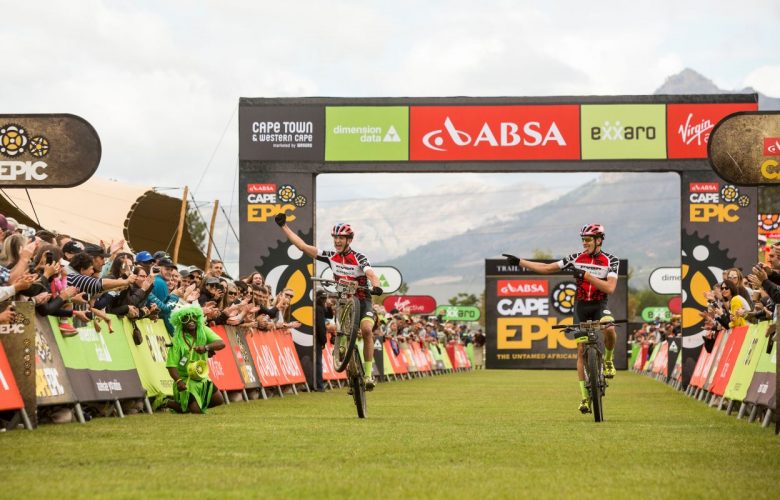 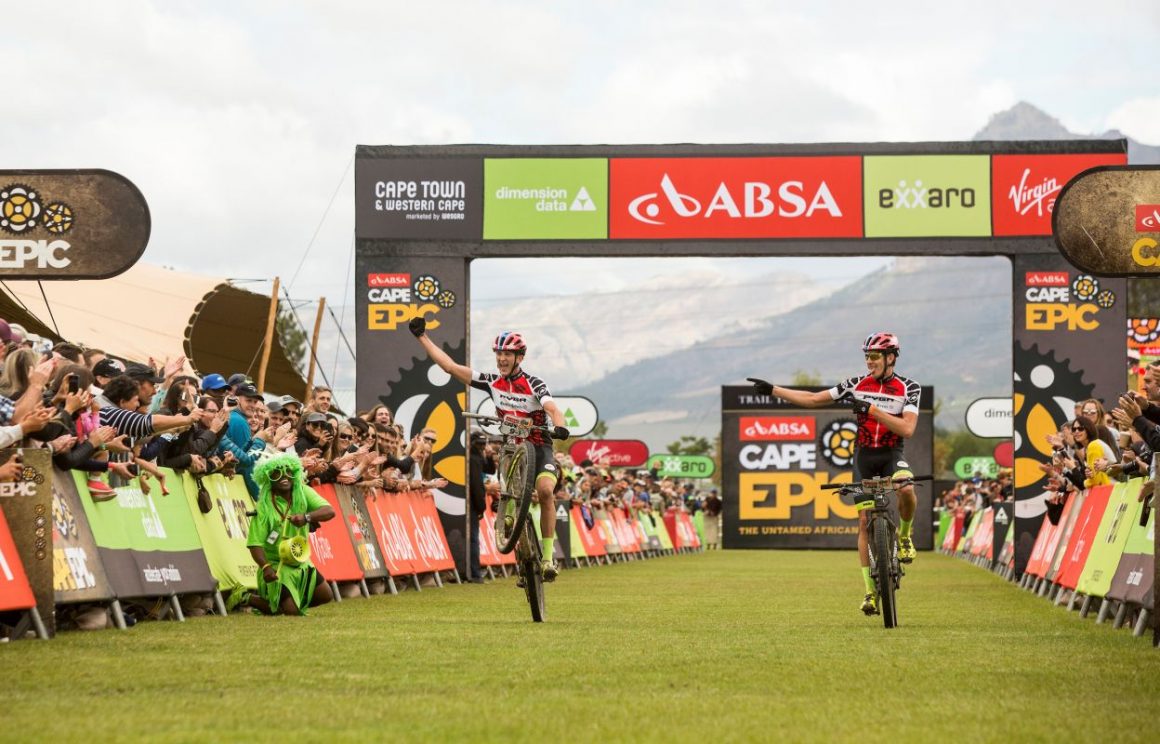 The Absa African Special Jersey was created, along with the Burry Stander Memorial Trophy, to foster the growth of elite mountain biking on the continent and to honour the legacy of South Africa’s greatest mountain biker. Now in its seventh edition the category has grown to one of the most fiercely contested within the Absa Cape Epic. With three previous winners lining up on two teams and the highly motivated NAD Pro MTB team created almost solely to knock PYGA Euro Steel off their perch the 2019 race will be a humdinger.

In five of the previous six editions the African MTB Team, formerly racing as SCOTT Factory Racing and now as PYGA Euro Steel, have emerged victorious. Matthys Beukes has been ever-present in each of those victories. The George resident was partnered by Phillip Buys in 2013, 2015 and 2017. While Gert Heyns rode to victory with Beukes in 2014 and Julian Jessop accompanied him to glory in 2018. Beukes is in fact undefeated in the competition; having not started the 2016 race when USN Purefit’s Darren Lill and Waylon Woolcock took home the title.

“History tells us that the African MTB squad know exactly what it takes to pull on the red jersey at Val di Vie” long-time rival Oliver Munnik confirmed. The nine-time Absa Cape Epic finisher, who will be riding his tenth race in 2019 for Signal Bikes, continued: “Consistency is often the key ingredient in triumphing at the Absa Cape Epic. Having ridden the 2016 event with Matt Beers and seeing the shape he is in this year, I would say NAD are in for a shout. If I were to pick a wild card winner, it would be Arno du Toit and Julian Jessop.”

The five-time category winner is not letting his pre-race favourite tag add any pressure to his preparation however. “Competition wise for the African jersey it would definitely be DSV Pro Cycling’s Du Toit and Jessop. They are two classy riders and a team to watch out for” Beukes speculated. “The Burry Stander Memorial Trophy has really helped to add some depth in South African mountain biking. It’s a good incentive for the guys to race and to get some exposure for the sponsors. Having said that it shouldn’t be the main focus – it’ll be better to aim high on the overall ranking and to just have this as a bonus, but as I said it’s a really good incentive” the PYGA Euro Steel star explained.

Adding his opinion to that of his teammate, Buys stated: “I think our main rivals will definitely be team DSV or team NAD – they are always strong in the competition for the Absa African jersey. We’ll definitely keep an out for anyone else that’ll cause a threat though. I think the depth and strength of the South African rider field is definitely stronger than previous years and I think the Absa African jersey really helped to contribute to getting these riders to the event and getting sponsors supporting them.” Switching his attention to the route the former African Continental XCO champion said: “I really think the 2018 Absa Cape Epic route caters well for spectators if you look at the areas we are visiting. That’ll be something that’ll be an advantage for the local riders just having your friends and family next to the trails supporting you.”

PYGA Euro Steel’s rivals Nico Bell and Matt Beers of NAD Pro MTB are encouraged by their 2018 showing, when they wore the red jerseys for a stage before Beers fell ill. The pair then recovered well in the latter phases of the race to finish on the category podium. “The route will be hard and there are some tough stages, last year our best stage was one I thought would be our worst” Bell recounted. “I would say the longer harder stages would be best for me. Matt [Beers] also has lots of power so if we can get into the open roads that’s where we can be at our best” he warned.

DSV Pro Cycling’s pairing of Du Toit and Jessop sees two talented but slightly unheralded riders team up. Jessop is of course the defending Absa African Special Jersey champion while Du Toit raced in support of the African MTB Team in 2015, finishing fifteenth overall. In 2018 he rode with SPOT Africa’s Timothy Hammond and placed nineteenth. In order to win the category DSV Pro Cycling will have, in all likelihood, to finish well inside the top ten general classification teams. Sixth is the average overall final finishing position of the Absa African Special Jersey winners over the years. In fact Beukes and Jessop’s twelfth is the only time the red jersey wearers have finished outside the top ten teams.

Outsiders for the category include the Imbuko Giant, Mad Macs, Darkhorse Wheels and Signal Bikes. The Imbuko Giant squad is made up of Nicol Carstens and Marco Joubert. As Joubert explained they are eagerly anticipating the start of the 2019 race. “I love it; it has a little bit of everything” the two time Absa Cape Epic finisher said. “Nicol [Carstens] and I have different riding strengths. I like the short/sharp/technical terrain climbs and decedents whereas Nicol prefers the longer ‘slogs’; he is the diesel having he raced in Europe on the road for a while. I think this pairing will work well for the 2019 Absa Cape Epic. Especially as both of us really like to suffer and we are both mentally tough. We have done some big epic rides in preparation for this year’s event, drilling each other a bit so I think we have done the right preparation physically and mentally.”

Andrew Hill will be taking part in his first Absa Cape Epic since 2014 and will partner Shaun-Nick Bester for Darkhorse Wheels. “We’ll have to be aware of all the South African teams as the race outcome can be determined by a misfortune or mechanical” Hill reflected. “Anything can happen and we need to make sure we race smart for the long game” he concluded laying out their team tactics.

Mad Macs are represented by the talented young Matthew Keyser and the experienced Charles McFall. While SPOT Africa’s Hammond is deciding on his Absa Cape Epic partner – though given the company’s strong African focus it will almost certainly be a fellow African rider.

The final dark horse team is the Signal Bikes squad of Munnik and Jarrod van den Heever. The younger member of the team will be making his Absa Cape Epic debut alongside one of the most experienced Absa African Special Jersey campaigners. Having ridden in the category for every edition of the race since 2013 Munnik was unfortunate to miss out on an Absa African Jersey podium in 2016 with Beers. Since his first Absa Cape Epic in 2007 the sport and the race has changed dramatically. “I would say the three biggest changes are the route, the performances of riders between positions 50th and 200th and of course the technology of the bikes” Munnik began. “The route is now mostly rugged mountain biking with little time spent in big bunches on the open road, which with hindsight, allowed us to recover a lot more in the old days. While the front teams have always been lightening quick, it has been remarkable to see how competitive the top amateurs have become. And from a technological stand-point, carbon 29er dual suspensions with 1×12 reign supreme … a far cry from the 26″ alloy hardtails with 3×9 gearing that would have been most common back in 2007 when I ride my first Absa Cape Epic.”

Not content with making his tenth Absa Cape Epic an easy one Munnik and Van Den Heever will be using the race as a testing ground for the newly launched Signal Bikes. “For the past few years I have wanted to develop a mountain biking brand around Cape Town’s lifestyle that could offer all South Africans a chance to enjoy the sport affordably. Together with Rush Sports we have developed a range that is affordable, but most importantly, capable of conquering South Africa’s toughest terrain and events, like the Attakwas Extreme and Absa Cape Epic. Jarrod van den Heever and I will be riding the 2019 event on a pair of Signal Elite alloy hardtails…” Munnik revealed. “For sure racing on an aluminium hardtail was not what I had in mind when I dreamt about riding my first Absa Cape Epic” Van Den Heever laughed. “It is an exciting challenge for Oli [Munnik] and I but definitely not impossible! The idea is to prove that it is possible to compete at, and not just complete, the notorious Absa Cape Epic on an affordable bike. It’s not going to be the smoothest ride, but for sure will be the most fun!”

While Van Den Heever and Munnik will be having fun, as well as racing as hard as possible, the rest of the Absa African Special Jersey teams have to focus more intently on the task at hand. The team with the most serious job – but who will not be in contention for the category win, barring disaster for Buys and Beukes – is the PYGA Euro Steel back-up team. Pieter du Toit and Phillimon Sebona will be racing their second Absa Cape Epic together in support of their team leaders. Du Toit is a talented youngster, while Sebona is one of the sport’s greatest success stories. Rising through the ranks of the Exxaro Mountain Bike Academy, though two victories in the Exxaro Special Jersey competition, to the ranks of elite riders Sebona exemplifies the founding aim of the Absa African Special Jersey competition. By providing the platform for sponsors to gain exposure and therefor encouraging the sponsorship of local riders the race for the Burry Stander Memorial Trophy fosters the growth of African mountain biking.