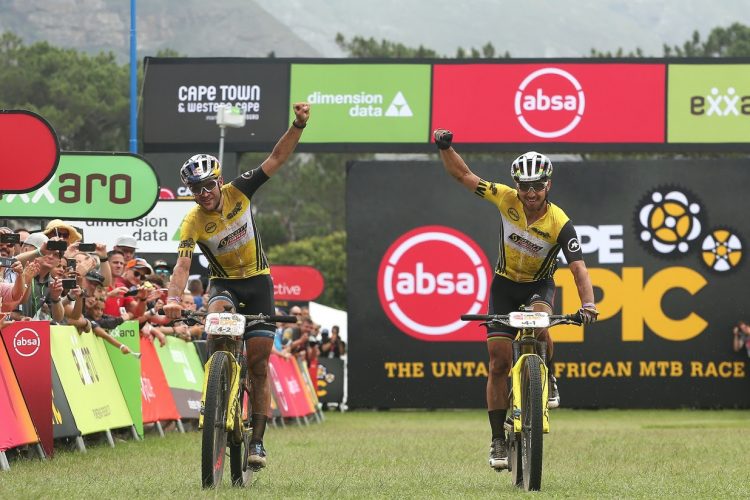 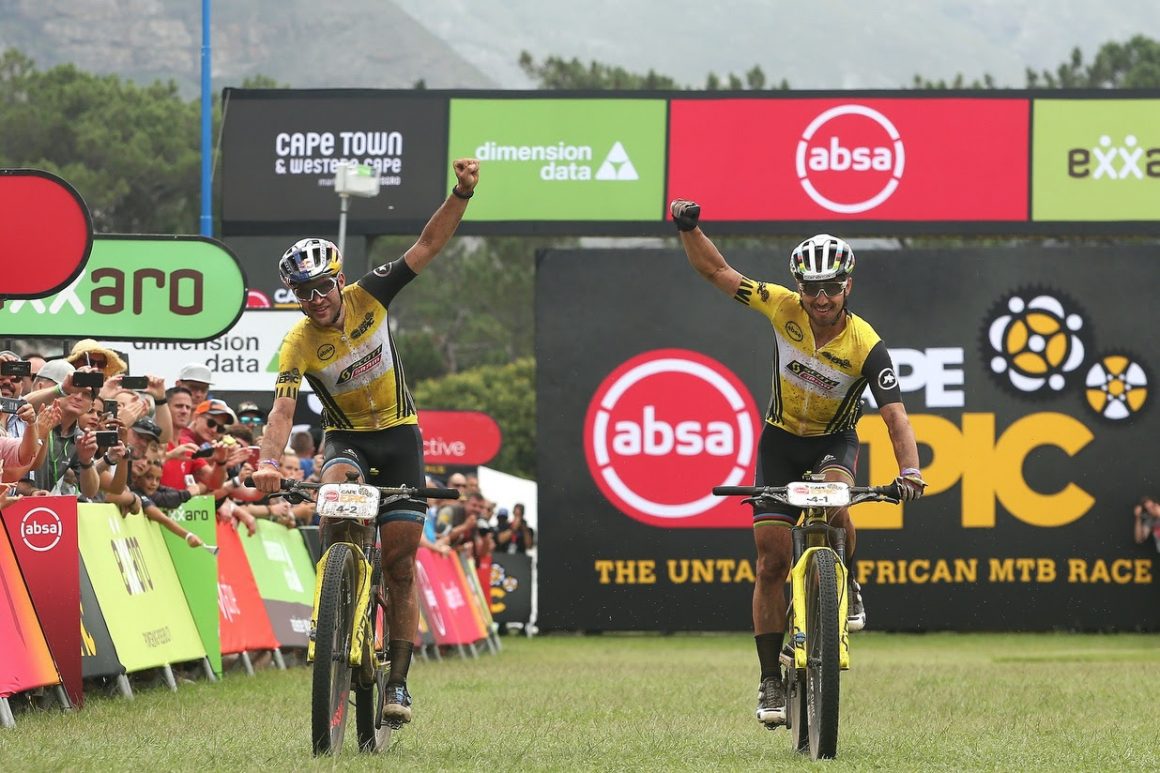 The all-Swiss pairing of Scott-SRAM MTB-Racing won the 111km Stage 1 of the 2019 Absa Cape Epic in emphatic fashion on Monday 18 March. Nino Schurter and Lars Forster finished in a time of 04:24:04 to extend their overnight lead to 3.33 over Manuel Fumic and Henrique Avancini of Cannondale Factory Racing, who finished second. The Team BULLS Legends outfit of Alban Lakata and five-time champion Karl Platt, rounded out the podium.

“I’m very happy with the win,” Schurter commented shortly after the finish on another cloudy and cool day which made for fast racing. “It was a good day out. I hurt a bit toward the end, but now we have time to recover for tomorrow,” he said.

Jaroslav Kulhavy and Sam Gaze of Investec-songo-Specialized crossed the line at Hermanus High School in the chasing bunch not too far behind, to limit their losses and climb up to third place on the GC.

However, if the big story is that three all cross-country teams are firmly placed on the top of a gruelling stage race GC, then there were many sub plots at play on a day not without its dramas.

The first – and perhaps most interesting – is the fierce battle which developed throughout the stage between the front two teams: A group of around 20 riders, featuring all the top contenders stayed together until the Dimension Data Hot Spot at 37km in. From there, the bunch began to split apart after Scott-SRAM MTB-Racing (who took the hot spot) pushed the pace.

Cannondale Factory Racing were able to stay in the mix as were Investec-songo-Specialized, one of the Trek Selle San Marco outfits, Canyon and the two senior BULLS teams. It stayed like this until Henrique Avancini went up the road to drop his much-storied hydration vest at water point three. This acted as something of a catalyst and the real fireworks started.

At around 74kms Sam Gaze washed out his wheel in a sandy section and went down hard. He was able to recover the rejoin the chase, but by then though Scott-SRAM MTB-Racing and Cannondale Factory Racing had already opened a gap on the chasing teams.

It wasn’t long after this that Scott-SRAM MTB-Racing went out alone. “The guys didn’t really want to work so we attacked them,” Schurter explained. “That’s how it works.”

“Everyone in the bunch was a bit nervous and it was hectic in the beginning, but then the racing really started after that water point,” Fumic added afterward.

“Scott was playing a few games and we didn’t really want to get involved in that,” he said. “So we just kept riding consistent and it’s all good. It’s a long week and you need to be strong at the end.”

His partner, Avancini, was rather more vocal after the finish. “They (Scott-SRAM MTB-Racing) were very strong today,” he commented. “Lars (Forster) is a world class rider – as I said yesterday – and Nino (Schurter) is perhaps the best ever.”

“But, it would be nice to have some microphones on the bikes so that people could hear the real Nino,” he chirped. “He’s always having a go at everyone. It’s fine, I will show him little by little. In this type of race I am really confident. I trust my legs, my body, my partner and my team. It’s a long week and I hope we’re going to have a nice fight in the next few days.”


Aside from Gaze’s crash and how much the chase work Investec-songo-Specialized had to do might cost them later in week, the other big talking point of the day was the renaissance ride of Team BULLS Legends Karl Platt and Alban Lakata, who finished third on the day.


“The last two years went really badly and that was difficult for motivation” and overjoyed Platt mused after the finish. “To finish on the podium is just such a joy and big relief for myself.”

“It went really well,” agreed Lakata. “We didn’t expect it to go like that and if it can go like this all week then it will be really good. But we also have to take care of ourselves,” he added. “It’s a long week and today took quite a lot out of us.”

The SpecializedFoundationNAD outfit of Matt Beers and Alan Hatherly had mechanical issues early on and spent the day battling back, but did manage to retain the Absa African Jersey.

Tuesday’s Stage 2 promises to take even more out of the riders with some 2250m of climbing over the 90km from Hermanus to Oak Valley.