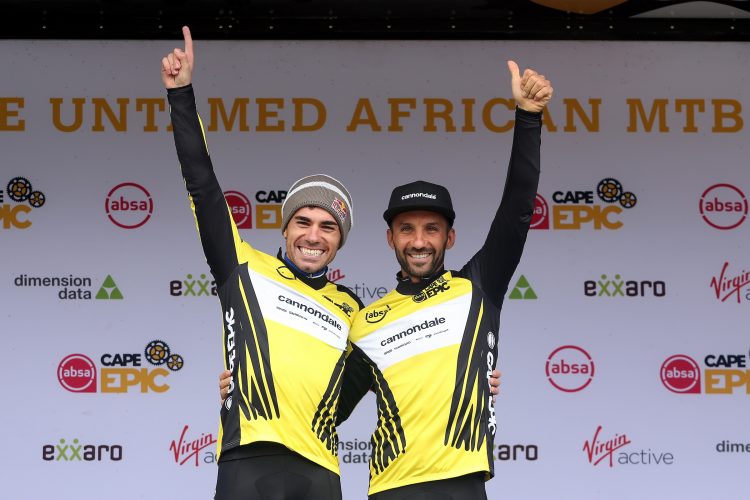 It’s not over until it’s over. A disastrous rear-wheel puncture saw Scott-SRAM MTB-Racing concede the Yellow Jerseys to Cannondale Factory Racing on Wednesday, proving once again that the Absa Cape Epic is won only when you cross the finish line at Val de Vie Estate during the Grand Finale.

Cannondale Factory Racing put on a tactical clinic for the rest of the field on Wednesday’s brutal 107-kilometre Stage 3 and ended up not only taking the stage win, but also moved firmly into first on the overall GC. Henrique Avancini and Manuel Fumic now have a 2:41 buffer over Scott-SRAM MTB-Racing, with the BULLS Heroes outfit of Urs Huber and Simon Stiebjahn in third, 7:45 adrift.

“Today was a special one for us,” was the word from Avancini after the finish. “The approach was to put the guys in the hurt box early and just push a little bit here and there. That’s what we did.”

“We went into the stage wanting to put the Yellow Jersey under pressure,” agreed Fumic. “On the first long climb we were working hard on the front and saw Lars (Forster) was struggling.”

“We knew then we had them where we wanted them and we put on a little bit more pressure,” he added.

Cannondale Factory Racing forced the pace up the iconic Groenlandberg climb and then let it all hang out further on the treacherous descent. It was not long after that when Lars Forster slashed his rear tyre.

Scott-SRAM MTB-Racing, under the ice cool leadership of Nino Schurter, stayed calm as they worked to repair the tyre while the field streamed past. However, they could not make the repair and were forced to descend on the rim toward the Houw Hoek Hotel water point at 60km. Their back-up team (DSV-SCOTT-SRAM) eventually caught them and gave them a wheel, but by then they had already lost a staggering nine minutes.

Cannondale Factory Racing picked up their hydration vests at the Houw Hoek Hotel water point and forged ahead. According to Fumic they didn’t attack or get overeager, instead opting to ride at a steady pace out front. “There are still a few days to go so we tried to stay relaxed and consistent,” he said.

Schurter and Forster put in a phenomenal effort over the last 40-kilometres to limit their losses, eventually reducing the nine minutes down to 6:45.

BULLS Heroes (Urs Huber and Simon Stiebjahn) finished the day in second while Damiano Ferraro and Samuele Porro of Trek Selle San Marco went one better than on Stage 2 to finish on the podium.

Scott-SRAM MTB-Racing were not alone in their misery during the brutal stage, however. Stage 2 runner’s up KROSS-SPUR suffered a severe mechanical after taking the Dimension Data hotspot on the top of Nuweberg. They eventually limped home way down the field but live to fight for stage honours once again.

Matt Beers of SpecializedFoundationNAD crashed hard, buckling his wheel. “He hit a sharp rock which rolled his front wheel and put him on his side,” said partner Alan Hatherly. “I actually thought we were done after that, but he picked himself up and we chased back to the group,” he said.

“Obviously after that our main concern was the Absa African Men’s Jersey, once we had reeled in IMBUKO GIANT we actually moved through the field. So we’re happy with that.”

SpecializedFoundationNAD had the good fortune of being able to take a wheel from Jaroslav Kulhavy after Beers’ crash. Kulhavy was completing the stage solo because his Investec-songo-Specialized partner, Sam Gaze, abandoned the race a few kilometres from the start after he did not recover sufficiently from his Stage 1 crash.

No doubt SpecializedFoundationNAD will be targeting Thursday’s 43km time trial. They will have their work cut out for them however with some of the other XCO specialists also targeting the time trial stage honours.