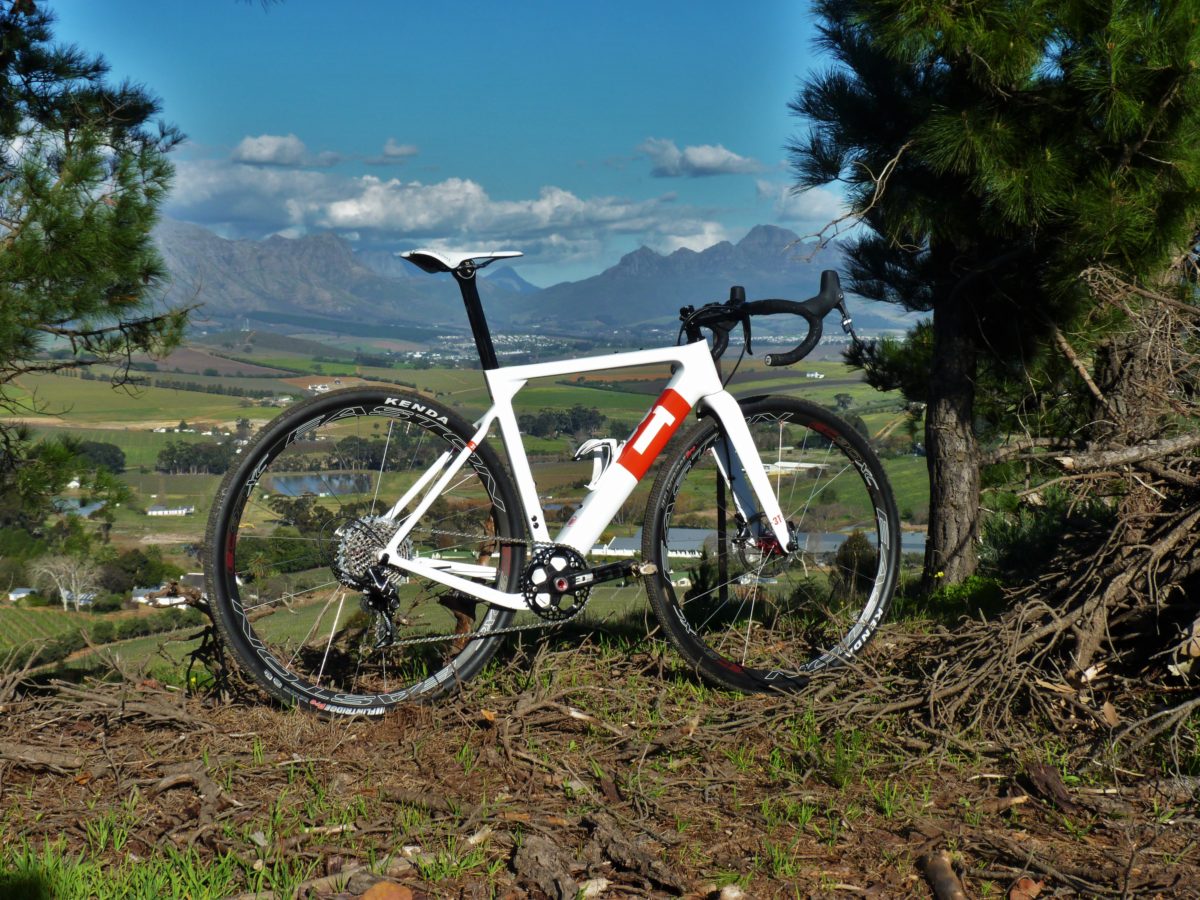 3T introduced the EXPLORO as the world’s first aerodynamic, all-road bike. In other words; a gravel grinding machine with no regard for wind! The EXPLORO features the same aerodynamic characteristics as a normal road bike, while exhibiting the same strength and fun habit, of a mountain bike. It’s a well-crafted bridge between the road bike and mountain bike game, and shows potential on South African soil.

I certainly cherished the ride! Dropper handle-bars steering on dirt; it’s not something you see every day. However, it’s becoming more and more of a thing. I mean, the 3T EXPLORO, comes locked and loaded. You can hit the tar, and cruise on unsightly gravel when the dirt comes due. Even single-track tempts this gravel bike!

The 3T EXPLORO frame, has some eye widening achievements in its show-case cabinet. The first being, a Frameset of the Year award for 2016/17. Then a 2017 Design Award, and most prominent EURO Bike Gold Winner in 2016. That told me, there’s something special about the EXPLORO, and in my opinion, the specialness started with the frame.

3T constructed the EXPLORO’s frame purely out of carbon fibre. Which makes sense, because they are kind of carbon specialists. The frame was solid in shape and design. Every area of the frame was built to take a hit, and handle those harsh roads. I experienced a very stiff bottom-bracket, which comes in as a real treat when your faced with steep ascents. Compliance was also majorly offered up, with necessary flexing areas in frame, it reduced fatigue on my body.

The EXPLORO seems to feature much qualities of an endurance road bike. Which is good, since gravel bikes are there to tackle long open, and sometimes unexplored roads. The weight of the bike is quite adequate; sitting as 7.9 kg by my measurement. Light enough to get up climbs with minimum drag.

The highlight and what set the 3T EXPLORO apart from other gravel bikes, was the carved out aerodynamics. 3T took every measure to ensure that this bike would pierce the wind, no matter what terrain you’re on. The nitty-gritty aero features mainly emanate from the SQAERO tube shape, which I’ll go over in just a minute.

The EXPLORO’s frame has been optimized to perform at its best when facing head winds. I can tell you, that this engineering feat comes as real privilege when you hit open gravel roads, especially in the Cape! While the aerodynamics are a road bike characteristic, 3T designed the EXPLORO’s frame to still maintain those same aero features with mud stuck on it! That just goes to show that this bike has got MTB drilled into its DNA.

What 3T calls SQAERO, is the unique down-tube design. Where the front part of the tube has been aerodynamically shaped, and squared off at the back of the tube. This wind breaking design, enables the down-tube to catch the air flow first, and shield the rest of the bike. Thus, the EXPLORO was able to minimize the effect of drag, that would normally be caused by an unsmooth airflow.

In terms of integration, 3T were able to optimize the SQAERO design to accommodate clean, internal cable routing. Plus, for those extra-long adventures on the bike, you can neatly attach a top-tube bag. All, without compromising aerodynamics.

Looking at the components of the 3T EXPLORO, you’ll notice that they’re a mix of MTB and road bike pieces. That being said, the idea behind gravel bikes, was to create a bike that can travel on any terrain. Races that took place where riders had to race across countries, demanded such a bike. That’s where the concept of gravel grinding came in. Why not make a bike that handles like a road bike, with the dropper bars and rigid fork, and keep it tough for off-road terrain with MTB components?

As I’ve explained earlier, the 3T EXPLORO found its home between acting like an endurance road bike, and super fun mountain bike. The aero features of the bike made the bike easy to pedal over aching extensive roads. There was hardly any difference between a normal road bike, and the EXPLORO gravel-grinder. Except for the gear ratio, that proved to be easier than a normal road bike, simply because of the 42t chain-ring in the front and 11spd MTB type cassette at the back.

When the tar dissolved into dirt, the easier gear ratio came into play. It’s a given fact that you need an easier and wider range of gears when you go off-road. On this terrain and with the gear ratio, I was able to get into a solid rhythm with my pedal strokes. I quite enjoyed this, as I never felt as though I’d run out of gears. In the end, the gear set-up for gravel grinding was spot-on, with the 3T EXPLORO.

The EXPLORO’s frame remained lightweight for the road, but when I hit the MTB trails, I felt the stiffness take over and become the highlight of the test. The stiff bottom-bracket and rigid fork played their cards, by letting no energy go to waste. Sure, a fully stiff carbon frame, can be bone-rattling on off-road terrain. Honestly though, it was worth it!

I personally felt faster on certain climbs, which I can only think was a result of the stiff frame combined with the abstract gear ratio. I’m not complaining in any way! Climbs ignited my zeal on the EXPLORO, because I was able to go faster. Admittedly, I did work up a sweat. Only because it was slightly harder to pedal.  The bike didn’t feel cramped either. The comfortable reach, made accessing the dropper bars that much easier and enjoyable to use on climbs.

I would say you need to have guts to pilot the 3T EXPLORO off-road downhill and navigate it along single-track. Firstly, I had to get used to not using brakes! Because of the position of the brake-levers on the dropper bars, your hands get really tired really fast, from pulling the brakes. Secondly, to steer the bike at high speed, you need good arm power. Since the handle-bars are narrower you exert more energy into steering, and paying attention to how you steer it on the trails. After all, you can’t get too low on switch-backs because of the risk of the thinner tyres losing grip out from under you.

So it takes nerves to ride the EXPLORO downhill out on the trail, but that doesn’t mean that it was all doom, and gloom. The 3T gravel-grinder, certainly did thrive on dirt. It was a pleasant ride all-together. Whether I transitioned from tar to dirt, or simply went plat-out on tar, the 3T EXPLORO made long rides a blast. One could say, it’s a road bike with an eagerness to have fun. That’s why I liked this gravel-bike!

The 3T EXPLORO is just one example of the gravel bike world that has a place in South Africa. Riders here, demand a bike that doesn’t shy away from dirt, but is always on standby for tar adventures. South Africa is definitely riddled with gravel paths, which is why the 3T is perfect for simply packing a bag or two, and hitting the long road to anywhere!