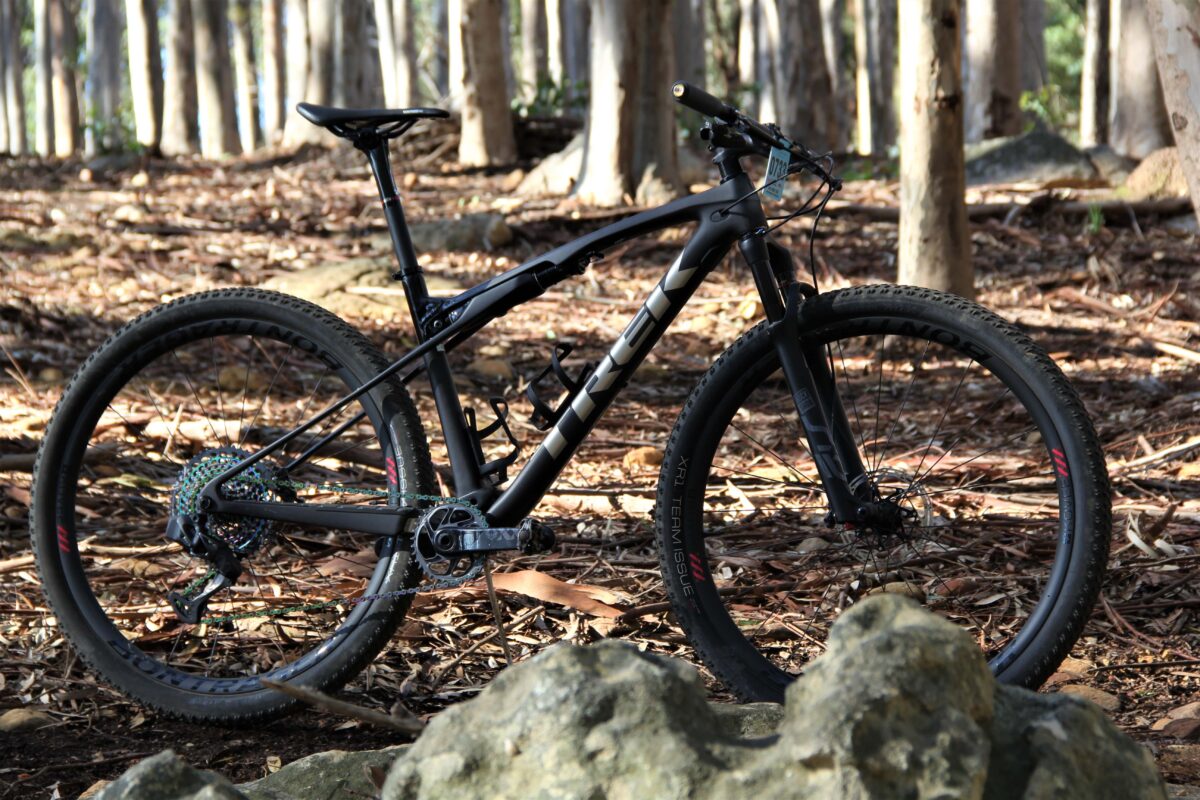 The new Trek Supercaliber – a razor-sharp, XCO weapon, that left nothing to chance. Every detail of the bike has been carefully considered and designed by Trek engineers, to the extent that the bike operates in absolute symmetry with its rider. Literally, the only aspect at play, that can determine victory or defeat for any rider, is their skill or fitness level. It entirely eliminated the question of; “is my bike really fast enough?”. The minute I hopped on board the Supercaliber, I just knew it was.

The racing journey of Trek Supercaliber started in the 2019 UCI XCO mountain bike season. Where I caught glimpses of the Trek Factory Racing Team riding a ‘new breed of XCO mountain bikes’. Of course – the IsoStrut rear shock – a very key feature of the bike’s frame was concealed for almost the entire season, until the brand was ready to unveil its secret weapon.

Finally, the Trek Supercaliber 9.9 AXS rolled into our HQ in recent days, and I was able to experience it first-hand. Many riders are calling it the engineering paradox of the decade (and we are only a few months in), describing it as short in travel, but frighteningly fast 😉

Essentially the second most important reason why the Trek Supercaliber was so ‘super’, is owed to an accurate layup of Trek’s Mountain OCLV carbon fibre. The frame was mainly designed around the IsoStrut, however it offers strategically placed flex points to add to the overall compliance factor. The seat stay was one such area. It was flexible when taking hits vertically – coming from the rear wheel – but remained stiff when horizontal force was exerted. In fact the rear triangle as a whole was exceptionally stiff when sprinting and taking corners, exhibiting a key characteristic of a hardtail.

And yes, the frame could take x2 water bottles comfortably – a sure advantage over some other dual suspension bikes.

Now, for the first and foremost important feature of the Supercaliber – the IsoStrut rear shock. Which is a unique and exclusive partnership between Fox and Trek, to integrate a rear shock with just 60mm of travel, into the bike’s top-tube on the frame. It offered Fox’s DPS  2-positon damper internally, and remote lockout.

From a technical standpoint, it was rather easy to setup once I understood how it worked. The Fox Factory Level tuned shock used a sag spacer that fitted internally around the damper shaft. It gave the shock a firmer feel, obviously to prevent it from bottoming out. The spacers have different sizes, designed to ultimately accompany different rider weights. Luckily, I did not have to fiddle around with these spacers, the team at The Gear Change bicycle store already took care of that bit. I simply had to pump the shock using my normal rear shock pressure values.

Find out how to setup your bike’s suspension here.

Specific to the Trek Supercaliber 9.9 bike model, was a SRAM XX1 Eagle AXS. You know what that meant! Wireless electronic shifting, fitted to a 1×12 speed setup with a 34T front chainring and G-1299 Eagle, 10-50 cassette – so crisp!

Trek are known for their perfect blend of cross-country race geometry on their mountain bikes. Balancing the handling and speed of the bike, the Supercaliber had a sharper 69-degree head-tube angle and a slacker 71-degree seat-tube angle. The chain-stay was also marginally shorter so I could get some better traction over the back wheel.

The Ride – Hardtail or Dual Suspension?

The Trek Supercaliber 9.9 AXS was quite the miracle worker on climbs – performing with the same characters of a standard hardtail when the shocks were on full lockout. There was a really prominent sweet spot, where the bike’s stiffness and weight and gears executed in pure symmetry. I could launch into a sprint quicker (dropping into a harder gear), with a nearly timeless shift from the SRAM XX1 Eagle AXS system – there’s no chain lag on the gears. The carbon engineering in the bottom bracket area was also remarkably stiff on climbs. And once again this worked in tandem with the bike’s weight, ultimately it allowed me to climb faster, and not expend unnecessary energy.

I can say that over longer distances the bike was pretty much easy-going. No mechanical problems arose from the AXS shifting system and fatigue levels were low. The saddle equipped on the Supercaliber 9.9 was the Bontrager Montrose Pro and had the perfect width to keep me pedalling comfortably – in fact it’s definitely one of my favourite saddles out there for marathon-like rides.

The downhills – where the Supercaliber truly came alive and performed like a proper dual suspension. I initially underestimated the 60mm of rear shock travel coming from the IsoStrut – I’m not even sure how the folks at Trek will top this innovation. That 60mm really went a long way, and the same can be said about the RockShox SID SL Ultimate with 100mm of shock travel. Technical rock gardens were almost none-existent, where the bike practically glided over without the sharp hiccups from the terrain – that you might experience on a hardtail. The front of the bike also remained super light, and I could carve out corners smoothly.

Did the Trek Supercaliber pass the test? I certainly think so. Going beyond the normal and pushing the limits of bicycle engineering, is what its all about – and Trek have done that brilliantly. The Trek Supercaliber could very well be leading the charge for the exciting new design trend in XCO mountain bikes. Where we see shorter rear suspension travel and more simplistic yet punchy frame geometry.